The lost boys of South Sudan 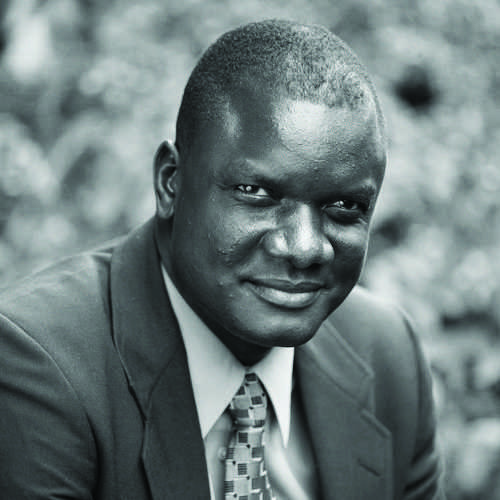 When troops from the Northern Arab government opened fire and destroyed everything in their path, it forced 12-year-old John Dau to run from his village of Duk Payuel in South Sudan. Dau’s home was destroyed, but that was just the beginning of the Second Sudanese Civil War. He had no idea of the trials and tribulations that were to follow. Although it kept him from his family for nearly 20 years, he also did not realize the lives he would change because of his story.

Platform Personalities brought John Dau back to NMU as a part of the annual Uniting Neighbors In The Experience of Diversity (UNITED) conference. Dau first shared his story at NMU in February 2007.

Dau began his journey to Ethiopia one night in 1987 with only his neighbor beside him and the hope he might find his family and return home.

“I thought we would come back,” Dau said.

People began to join their trek along the way. Two became five that soon became 19 and finally 27 of them walked naked and survived on wild fruits while chewing on grass.

The journey to Ethiopia took three months. When they arrived, the government offered them a small jungle to build shelters. Children came from different directions, converging in this one location. The 27,000 displaced boys soon became known as the “Lost Boys of Sudan,” all aged from 5 to 15.

“We didn’t have families so we made our own,” Dau said.

For four years the boys were safe in Ethiopia. Then something sudden happened, the Ethiopian government was overthrown and the 27,000 boys had one week to return to South Sudan.

Fighting starvation, dehydration, disease and bombings from the Northern Arab government, the boys sought shelter in Kenya. It was a six- month journey. In 1992, Dau and the other 12,000 surviving boys found shelter at the Kakuma Refugee camp in Kenya and it was where Dau began his education at 17. With the lack of supplies at camp, Dau learned the alphabet by writing letters in the dirt with his fingers. Though his education system was not as traditional, it’s still something he cherishes to this day, he said.

“Education is my mother and father,” Dau said. “It will give you food like a mother and protection like a father.”
Working with the International Organization for Migration and the U.S. government, Dau and other young men of the camp were chosen to be resettled in the United States to see what better opportunities they could find. Dau was placed in Syracuse, New York.

The early part of Dau’s journey is featured in the 2006 Sundance Film Festival “God Grew Tired of Us,” which is a Grand Jury awarded documentary. The film documents his adaptation to American culture and his continued search for his family. A local church took Dau under its wing upon his arrival in the United States and he worked multiple jobs to stay on his feet.

“Now I have been helped. How am I going to give back?” Dau said.

While he furthered his education at Onondaga Community College and completed a bachelor degree from Syracuse University,
Dau focused on how he
could find his family and also how to give back to his people.

“Once you come to the United States, that
is 50 percent of the work. The rest is up to you,” Dau said.

After tirelessly searching, Dau was able to locate his mother in 2002 when his brother sent a letter to him assuring they were still alive. In 2004, the two were reunited for the first time in 17 years. One year later, Dau and the John Dau Foundation were able to go to South Sudan where he began to work in a clinic in his home village of Duk Payuel.

Thirteen buildings were constructed in the village. The first was named the Duk Lost Boys Clinic, and at one time provided aid to 190,000 patients. However, the clinic was destroyed due to violent uprisings in 2011.

With the weight of the topic, Dau was quick to explain that sharing such an experience was therapeutic for him and he encourages others to do the same. By sharing his extraordinary story, Dau hopes that people are able to make a connection to their own lives.

“Success and struggle is a package you must accept. Please don’t let yourself be held hostage by what happened in your life,” he said. “What is your story? Are you using your story to help others?”
In terms of his return as a guest of the UNITED conference, Dau
said that the audience was unfamiliar with his narrative.

“There is an entire generation that hasn’t heard me or my story,” Dau said.

“It was really important for us to bring in someone that is current and we really liked him on a personal level,” Head said. “He’s a very well-attended speaker.”

Dau now teaches in Richmond, Virginia, where he lives with his wife and five children.

“Right now I would say I am living the American Dream because of the work I’ve done,” Dau said. “I didn’t give up.”