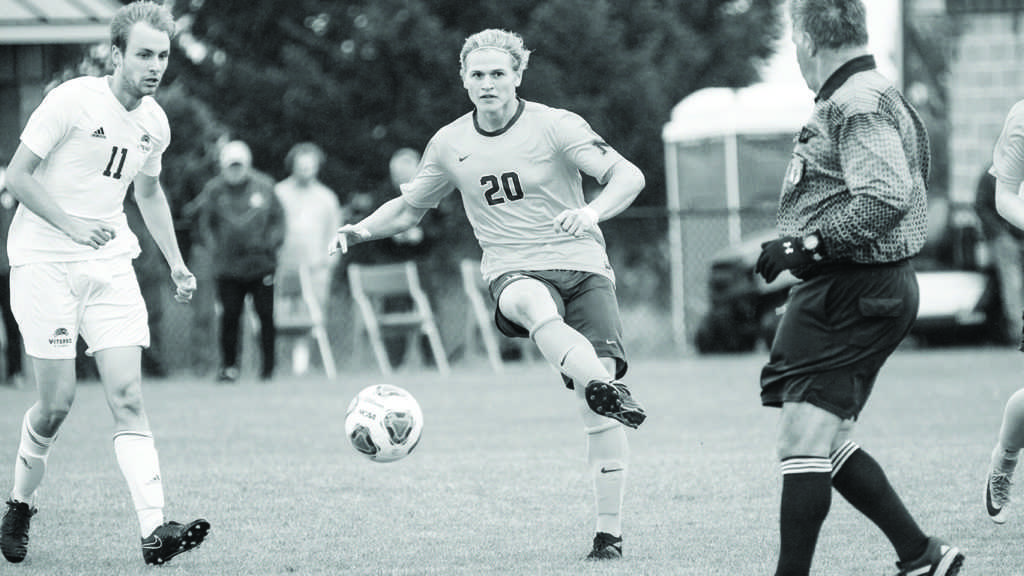 Momentum was in the Northern Michigan University Men’s Soccer team’s favor this past homecoming weekend as they routed the Viterbo University V-Hawks by a score of 10-0 at home, and fought to 0-0 draw with the University of Wisconsin-Parkside Rangers.

Friday’s victory helped bolster NMU’s record of five straight wins, their longest as a varsity program while Sunday’s draw helped push the Wildcat’s unbeaten streak to six games. The Wildcats continue their ascend in the United Soccer Coaches NCAA Division II polls, as the team climbed one spot in the rankings, moving from No. 22 to No. 21.

“It’s been a work in progress,” head coach David Poggi said. “We wanted to come out strong, and I think it’s reflecting in the rankings. We played some good opponents and it’s put us in a good place for us to get recognized.”
With the last four games played at home, senior forward Sam Popp said that the team, especially the seniors, have taken advantage of playing in front of a raucous home crowd.

“Being that some of us are seniors, we have nothing to lose. We just have to go out there, do our best and win a lot of games,” Popp said. “It was great having elementary school kids out there (Friday) and we provided a good show out there for the fans to show them that it is fun to watch soccer games here.”

An offensive explosion was on display last Friday as junior midfielder Callum Olpin and Popp kicked in three goals in an eight-minute span for an early 3-0 for NMU, highlighted by Olpin’s 20-yard blast that beat the Viterbo goalkeeper high to the right. A pair of Wildcats collected their first career goals, as senior midfielder Carson Burmeister and sophomore forward Brady Koenenburg contributed to the score sheet.

Offense aside, NMU was staunch on defense as they cut off nearly every Viterbo pass scoring opportunity. It wasn’t until the 35th minute of the first half that Viterbo took a shot on goal, a blast that soared far north of the crossbar. The Wildcat’s ended the first half with a 5-0 lead over the V-Hawks.

The record-breaking scoring frenzy continued into the second half with junior forward David Kromah’s first goal of the season to put NMU up 6-0. Sophomore Ben Hoffman, who missed last season due to injury, added two goals to make it 8-0.

Freshman midfielder Alexander Gailbrath registered his first goal as a Wildcat in the 75th minute. A foul by a Viterbo defender in the penalty area led to an NMU penalty kick taken by senior forward Nic Harenda, who buried the shot and secured the team’s first double-digit win in program history.

Senior defenseman Kevin Hoof said with the rout, it was an opportunity for those players who haven’t been in a game to take advantage.

“I thought that it was good for us to get those players in, to get them some playing time and experience on the field,” Hoof said.

Unlike Friday’s game, Sunday’s game at Parkside had very little scoring. Both sides struggled offensively to set up shots throughout the first half, with the only shot on-goal coming from the Rangers early at the six-minute mark.

Only four more shots total were recorded in the first half as NMU took a 3-2 shot lead into the intermission.
Parkside woke up in the second half with their offense, attacking Wildcat defenders while outshooting NMU 13-5, with seven shots going on-goal. Parkside’s thirteen shots are the most the NMU defense has faced all season in a single half. Both teams were unable to find the back of the net, however, and the game would go into overtime with the score even at 0-0.

In both overtime frames, neither team could break the scoreless drought, with the Rangers again outshooting NMU. The game would finish in a 0-0 draw.

“It was a tough game [in Parkside],” Hoof said. “They were very disciplined defensively so there wasn’t a lot of opportunities going forward for our attack.”

Kliebe stopped nine shots with seven of them coming in the second half. The Wildcats have not allowed a goal in three consecutive games.

NMU is on the road this weekend as they travel to Ohio to take on the Ashland University Eagles at 7 p.m. on Friday, Sept. 28, for the teams first night game of the season. From there the Wildcat’s continue their roadtrip to play the Saginaw Valley State University Cardinals for a Sunday matinee matchup beginning at 2:30 p.m.

“I think that we have a team that should win both games this weekend, and if we win both games, we should be number one in the GLIAC,” Popp said.

NMU finishes up next week’s schedule at 3:30 p.m. on Wednesday, Oct. 3, as the Wildcat’s play host to the Northwood University Timberwolves for a mid-week GLIAC conference matchup.

Northwood (4-3, 2-1 GLIAC) is tied for third place in the GLIAC conference with Saginaw Valley State. NMU sits alone in second.