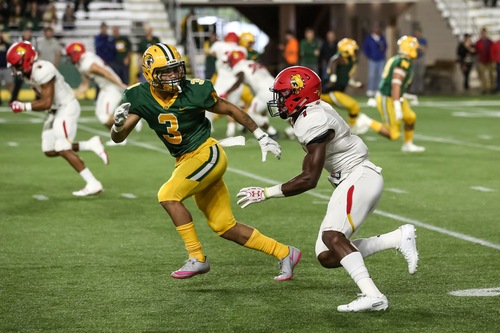 After facing two top-10 opponents the last two weeks, things still don’t get any easier for the Northern Michigan University Football team this week as the team takes its first GLIAC road trip of the season visiting the Davenport University Panthers.

The Wildcats were defeated by a top-10 opponent for the second straight week, this time at the hands of the No. 6 Ferris State Bulldogs (FSU) 35-19 at the Superior Dome Saturday afternoon.

The Wildcats fell to 1-3 (0-2 GLIAC) on the season while the Bulldogs improved to 4-0 (2-0 GLIAC).
NMU found itself down 14-0 early after two first quarter touchdown passes from FSU junior quarterback Jayru Campbell, the first to freshman receiver Sy Barnett and the second to junior receiver Jevon Shaw.

The Wildcats got on the board at 12:06 of the second quarter on a 40-yard field goal from freshman kicker Daniel Riser. Later in the quarter, Campbell found Barnett again later in the quarter on a 28-yard touchdown pass.
With 1:24 left in the first half, NMU got its first touchdown of the game on a two-yard rush on 2nd and goal from senior running back Jake Mayon. The score was 21-10 at the half.

Ferris scored two more touchdowns early in the third quarter to go up 35-10, while Mayon added another touchdown late in the quarter and Riser added another field goal in the fourth.

Down 16 points with roughly four minutes left, Ferris State junior kicker Jackson Dieterle missed a field goal, giving the Wildcats the ball back. NMU couldn’t capitalize however, and Ferris ran the clock down to 0:00.

NMU sophomore quarterback Latrell Giles was 10-of-23 for 177 yards while Mayon led on the ground with 97 yards rushing. Sophomore wide receiver Ravon Johnson led the team with four catches for 61 yards.

Now the Wildcats will turn their heads to the Panthers this weekend. A much improved squad from last season, Davenport (DU) is 4-0 on the season with a 1-0 GLIAC mark after posting a 1-10 record in 2017.

To go with the Panthers’ 4-0 record is the nation’s best defense. The Wildcats will be up against that defense which has given up just 708 yards of offense this season.

NMU offensive coordinator Marty Higgins said the key to breaking down the DU defense is to be better on offense.

“They’re another tough opponent with one of the top-ranked defenses in the country,” Higgins said. “They’ve got some good athletes, they run well and we try to prepare for every opponent the same way each week. We want our guys to have a lot of effort, toughness and physicality. Our job on offense is to be more physical than they are.”

As for the Wildcats’ own defense, they rank 148 out of 167 teams in yards allowed per game and will look to keep a Davenport offense, ranked 81st in efficiency, at bay.

NMU defensive coordinator Kirby Cannon is preaching to his team to stay focused on their tasks and to take things slow.

“The old cliché of one game at a time really holds true,” Cannon said. “We’ve told our team all along that we had a great opportunity to win the first two and then we were going to have to improve to compete in the next two. We gave it our best shot and I thought we competed really well against Ferris.

“This week is kind of like a new season. We know that six out of the next seven teams that we play are in the same skill set as we are. We’re preparing to cut down on our mental mistakes, make sure we don’t give up anything big in the air or on the ground, and we’ll be ready to play.”

Kickoff from Grand Rapids is set on Saturday, Sept. 29 at noon.