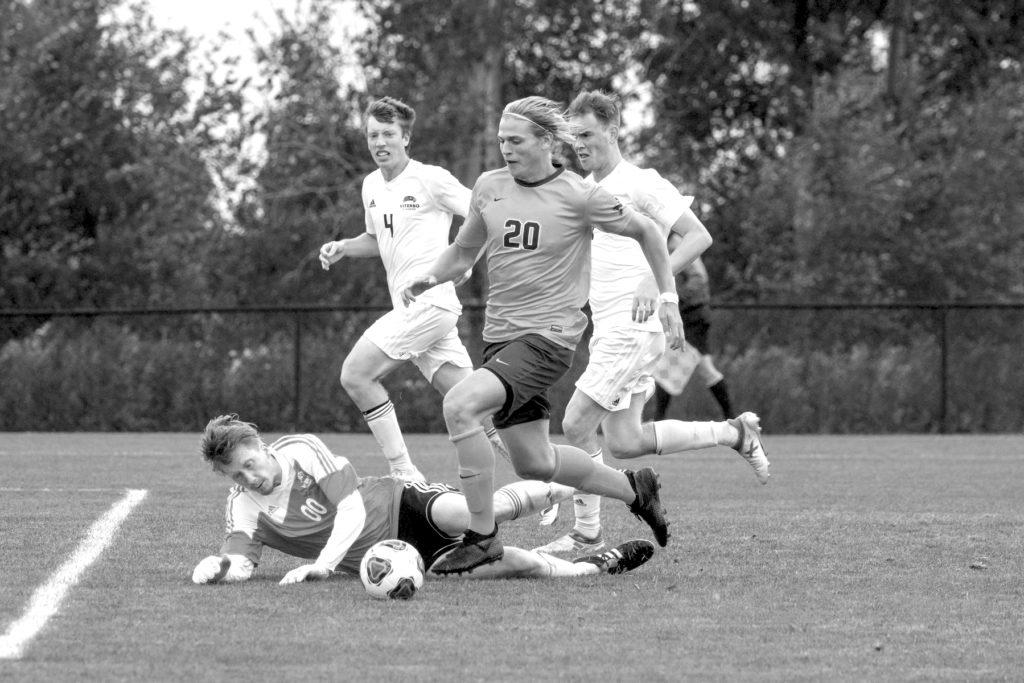 Photo courtesy of NMU athletics NMU redshirt sophomore Ben Hoffman corrals a loose ball past a sprawling Viterbo University goalie and scored in a previous matchup this season. Hoffman continued his hot scoring streak by recording a goal against Ashland University in what proved to be the deciding goal in a 1-0 contest.

Over the weekend, NMU defeated the Ashland University Eagles 1-0 and fought to a 0-0 draw with the Saginaw Valley State Cardinals.

Now sitting in second place in the conference standings, the team is looking ahead to perhaps eclipsing the first-place University of Wisconsin-Parkside.

Head coach David Poggi said the defense provided a spark against two of the top teams in the conference.
“Playing defensively has been key for us in the big games,” Poggi said. “We concentrated on that for the first half of the season and it has paid off.”

Sophomore forward Ben Hoffman said both of last week’s opponents provided a good gameplan to match up against the team.

“We came thinking we were gonna get six points,” Hoffman said. “Ashland played really aggressive but we snuck one [goal] away.

“For Saginaw, we played tough. I mean, we were okay with the draw because they were a very solid team,” Hoffman said.

Against Ashland, both teams struggled early to find opportunities on offense. However, it did not take long for the Wildcats to score as a header from Hoffman found the back of the net at the 28-minute mark. For Hoffman, it was his third goal in as many games. Fellow sophomore Luca Lippert and junior midfielder Callum Olpin provided the assist on the goal. NMU and Ashland each tied with five shots on goal at halftime.

The second half also saw neither side record any key shots on goal. Ashland led with more corner kicks with a 3-2 margin, but they were kept out of the net. NMU’s defense stopped the Eagles’ late rally and the Wildcats would walk away with a 1-0 victory.

After scoring his third goal of the year, Hoffman was ecstatic to be back and playing with the team after missing nearly all of last season due to an injury.

“The year off took a toll on me personally because I couldn’t do much,” Hoffman said. “It was boring to watch from the sidelines, it really motivated me throughout the summer to get in the best shape I can be and be with the team.”

Sunday’s matchup against Saginaw Valley started with the Cardinal’s offense attacking the Wildcat defense throughout the first half, bombarding Kliebe with 10 shots before halftime. NMU managed to turn away all six off SVSU’s shots-on-goal and six corner kicks, as both teams went into the intermission scoreless.

The Cardinals continued to create an advantage in shots in the second half (8-1), but the Wildcats defense kept SVSU without a goal going into the first half of overtime.

Throughout both overtime frames, NMU’s defense held off SVSU’s eight shots, saving four from going in the goal. The Wildcats’ stingy defense and goalkeeping, matched against the Cardinals’ relentless offense, would end in NMU’s second scoreless draw in three games.

Kliebe’s sixth start in goal featured 11 saves from 27 shots, furthering his record to 4-0-2. After earning the starting nod, he has allowed only a GLIAC-low one goal, salvaging a .971 save percentage. His efforts also earned him the GLIAC Defensive Player of the Week honors.

“It’s been a great month for me,” Kliebe said. “Clean sheets are very important for us and I’m happy about that.”

Kliebe praises the team for sticking with him in goal.

“It’s not all about me, it’s about the team,” Kliebe said. “Especially the back line, they are doing a great job.”

After the Wildcats host the Northwood University Timberwolves on Wednesday, Oct. 3, the team only has one game on the schedule this weekend as they face off with the first-place University of Wisconsin-Parkside Rangers at 3:30 p.m. on Friday, Oct. 5, at the NMU Soccer Field.

Poggi said these next conference games will decide the season.

“In the GLIAC, anybody can beat anybody on a given day,” Poggi said. We just have to keep reminding that going forward.”

Despite earning four points last weekend, the Wildcats’ dropped one spot to No. 22 in the NCAA Division II polls.