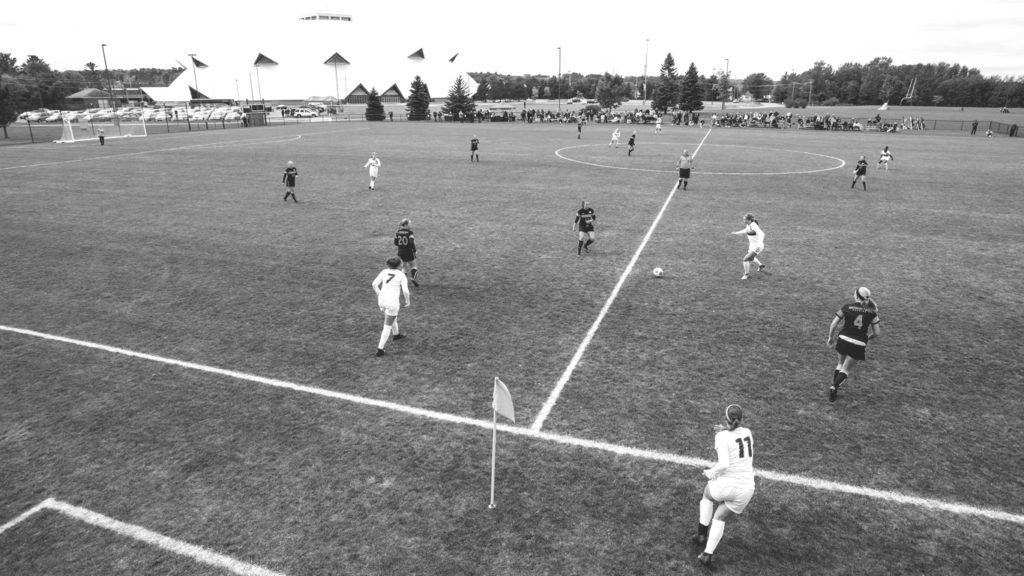 Photo courtesy of NMU Athletics An aerial photo of the women’s soccer team captures a throw in from NMU’s senior defenseman Anna Worman.

Tech started with a strong offensive attack forcing senior goalkeeper Emma Vermette to make two stops in the first ten minutes. Northern responded with two shots of their own, however, each attempt sailed wide of the Husky goal. The Wildcats survived MTU’s 13 first-half shots backed by a strong performance from Vermette. The NMU netminder kept Michigan Tech off the score sheet, making saves on the six MTU strikes on target. The Cats‘ launched seven balls toward the Husky goal in the first half with each shot missing the mark.

The momentum for the Huskies continued through into the second half, overwhelming the struggling NMU squad. MTU’s tenacious offense created multiple opportunities and kept the Wildcats on their heels.

Tech’s persistence paid off in the 73rd minute when the Huskies finally broke the scoreless drought. Michigan Tech’s Grace Shaw delivered a long cross to the near post where Jesse Jacobusse was making her weak side run. Jacobusse connected with the cross, putting her foot through the ball to send it to the back of the net. Jacobusse’s goal gave the Huskies a 1-0 lead with 17 minutes left to play.

The Wildcats let fly a couple shots following the goal but were unable to even the score. The Cats‘ were outshot 27-12 in the match and dropped their second game in a row with the 1-0 loss.

Despite the loss NMU senior capitan Aimee Colla sees this game as a lesson moving forward.

“Every single player on our team continues to work hard every practice in order to be prepared for our next match,” Colla said. “We are one big family. We win together, we lose together.”

Northern travels to Davenport University for a game at 5 p.m. on Friday, Oct. 5. Then at 1 p.m. Sunday, Oct. 7, NMU continues their roadtrip to play the top team in the conference, the Grand Valley State University Lakers.