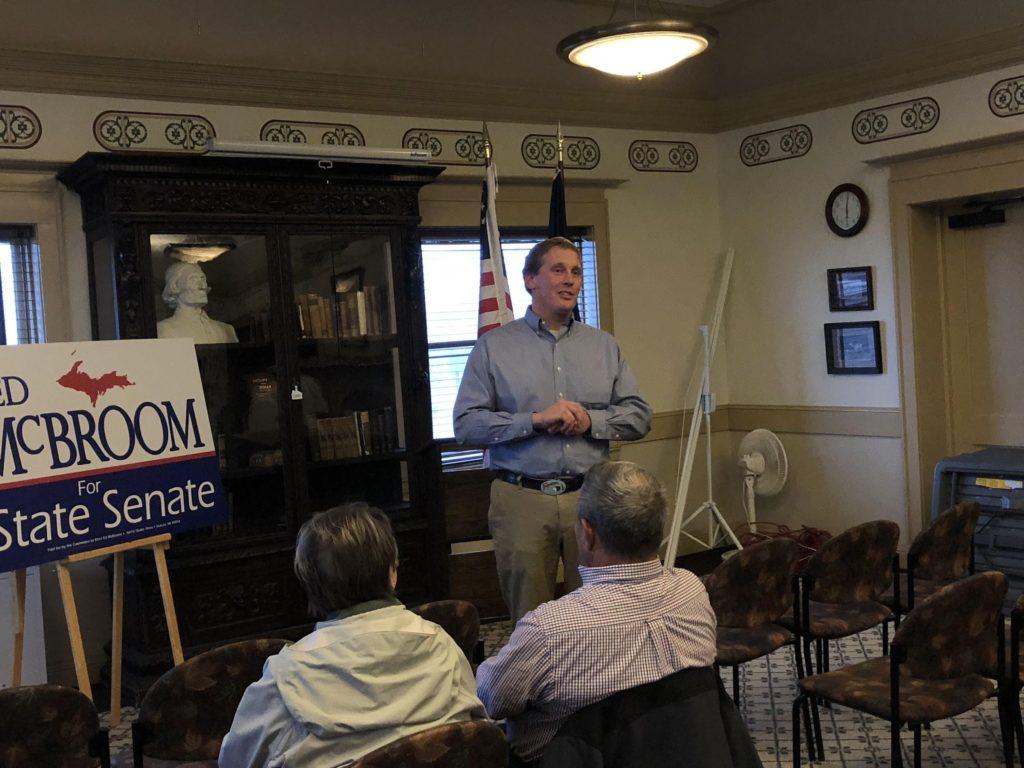 “We need auto-insurance reform desperately, and it is one of the quickest ways we can get money back in the pockets of everyday people,” Republican state senate candidate Ed McBroom told his supporters Tuesday evening. “The system is a burden on poor people and a real burden on families up here.”

McBroom talked to a small group of community members in the Shiras Room at the Peter White Public Library and discussed his plans for Michigan. Car insurance, education curriculum reform and governmental accountability were some of the topics discussed by the candidate, who was joined by Michigan Republican Speaker of the House Tom Leonard. Running for the 38th district, McBroom will face Rep. Scott Dianda (D-Calumet) and Green Party candidate Wade Roberts in the Nov. 6 election.

In 2010, McBroom ran for the Michigan House of Representatives where he served until the end of 2016, but there’s still so many problems that need to be fixed, McBroom said, adding, number one being auto insurance, where Michigan has the highest auto insurance rates in the entire nation.

While other legislators were opposed to reforming auto insurance, McBroom knew something had to be done and he’s one of the few who spoke up at the auto insurance hearing as a “concerned citizen” and its that U.P. voice that Lansing desperately needs, Leonard said.

Education is also a huge concern for McBroom, who graduated from NMU in 2005 with bachelor degrees in music education and social studies secondary education. When students are refrained from learning about different trades such as welding or limited in participating in the arts, that’s an issue, he said. Legislators shouldn’t be the ones to decide how students learn, it should be the local school boards who have more authority to make these decisions, he said, adding, schools shouldn’t look “cookie-cutter” to the next.

The 35-year-old U.P. resident of Norway got involved with politics after being put to the test as a fourth generation dairy farmer, who milked 110 registered Holstein cows. McBroom, who farms with his wife, his parents and his brother on a 600-acre farm, was bothered by the legislation and regulation that was “attacking” the farming life, he said. For small family farms, in particular, the rules were becoming more unreasonable and discouraging people’s choice of livelihood, McBroom noted.

“The way of life that my family has and other families across the U.P. have should be protected and preserved. Whether it’s my farm or someone’s hunting camp or their job at the mine, [they] shouldn’t be endangered by bad government,” McBroom said.

With a little more than three weeks away from the election, it’s vital to meet with communities to gain their perspective, McBroom said. People want someone who has a “record of success” in working with others. And someone who knows how to build coalitions while reeling in the results for the U.P., he added.

“I enjoy meeting people and learning about what interests and excites them, and where they came from in life. People in the U.P. have great stories to share, and [it’s] so important to make these connections with people because either they have an issue right now or they might have an issue down the road that they need help with,” he said. “That’s why these kinds of meetings are so valuable and important.”