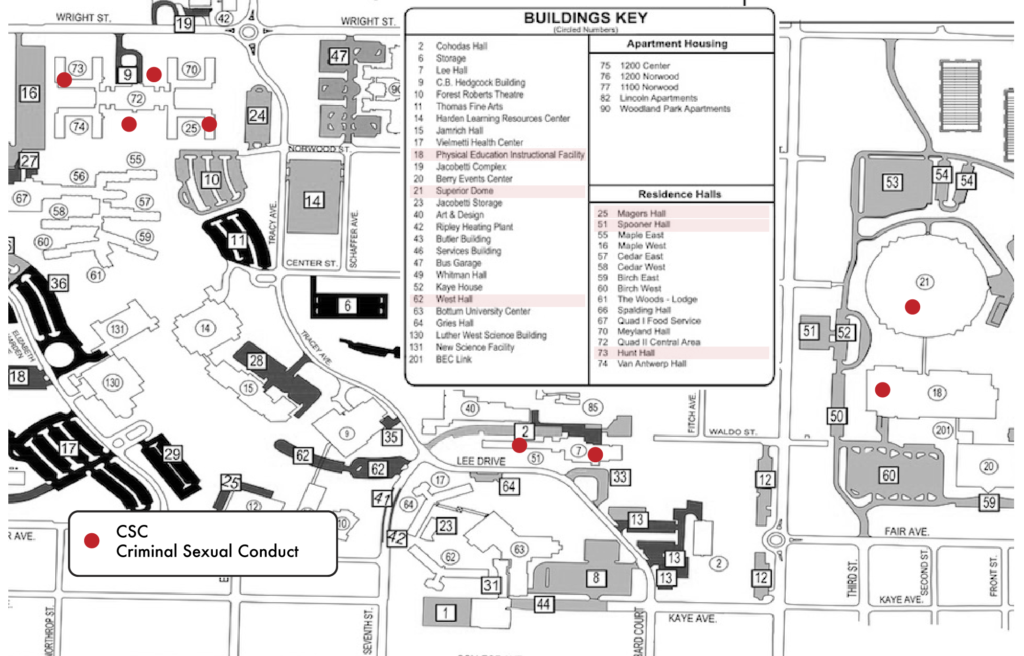 This map identifies where on campus specific cases took place. All 21 instances occurred on university property, but nine did not have locations listed in victims’ initial reports. Photo by Chloe Anderson

According to NMU’s annual security report, 10 more instances of criminal sexual conduct (CSC) were reported to the NMU Police Department (NMUPD) in 2017 than in the previous year.

A federal crime transparency statue—The Jeanne Clery Disclosure of Campus Security Policy and Campus Crime Statistics Act—requires NMUPD to collect and publish crime statistics for the previous three calendar years. Twenty-one reports of CSC were documented in 2017, whereas 11 were recorded in both 2016 and in 2015.

Of the 21 reports documented in 2017, 13 were investigated by NMUPD and two were unfounded, NMUPD Director Mike
Bath said.

The total count represents all four degrees of CSC defined by the Michigan Penal Code. All four degrees involve non-consent and age-classifications. The first and third degrees regard penetration and the second and fourth include variations of body and genital touching.

Three reported cases were classified as fourth degree CSC, two reported instances were identified as first degree CSC and one CSC was reported as all degrees, according to daily crime logs.

“Clery Act is not specific to student-to-student related sexual assault,” Bath said. “If somebody came onto campus, not affiliated with the university, and reported a sexual assault, those numbers are reported here.”

The total represents any CSC that reportedly occurred on university affiliated property, including campus, off-campus buildings owned or controlled by NMU and public property that borders campus. Also considered are international travels and athletics trips.

Ten reported acts of CSC occurred in residence halls whereas two took place at non-residence hall campus locations, according to daily crime logs. The remaining nine transpired on campus, but the specific locations were not identified in initial victim reports.

Both Bath and Mincheff attributed the rise in reporting to university initiatives to educate on and bring awareness to sexual assault, as well as national movements.

“We figured we would see an uptick in this time period because of all the education programs on campus like ‘It’s On Us’ and national movements like ‘MeToo,’” Bath said.

Mincheff added that NMUPD trains student-group advisors and over 350 campus security authorities, or “individuals that would have any direct influence or supervisory roles over a student” on reporting procedures.

“We’ll continue to see these numbers rise because more people are comfortable enough to report,” Bath said. “We do a really good job of accomodating and meeting the needs of the individual.”