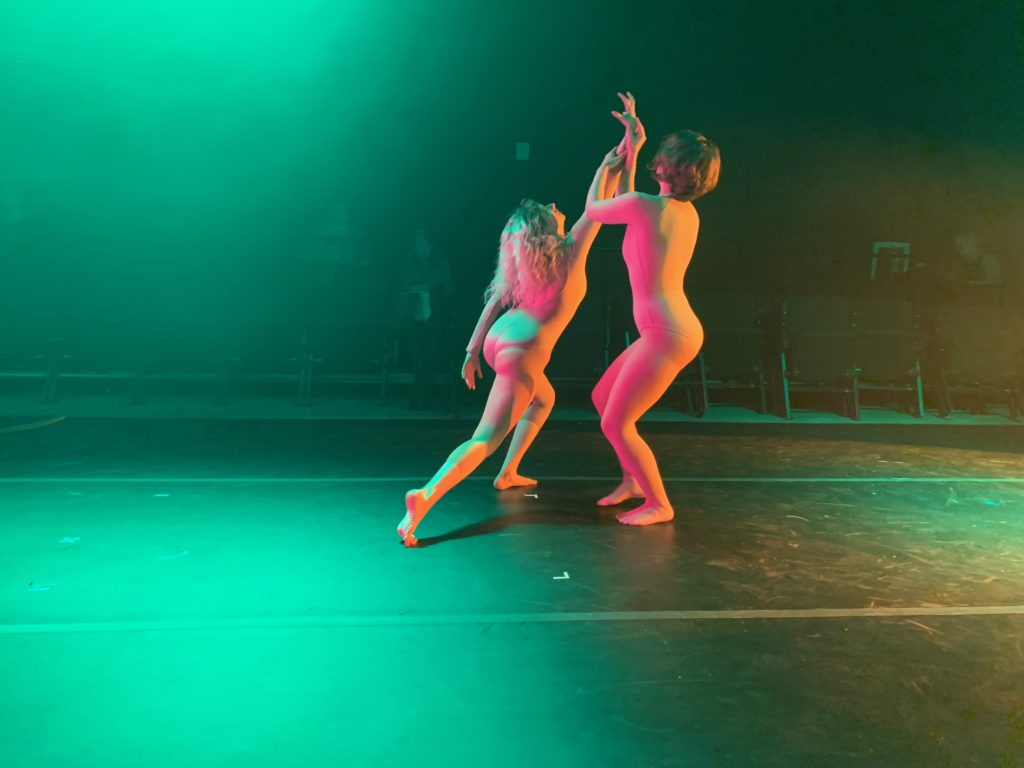 A fight bell rings. Drum sticks pound on a garbage can as the actors chant for the arts. From Brazilian instruments to Middle-Eastern, exotic sounds, the music echoes in the intimate Black Box Theatre. In 1920s suspenders and bowties, men talk in a Shakespearean tongue. Meanwhile in another setting, women strike each other with poetic lines while being strapped in Renaissance corsets and padded down in puffy gowns. Maracas shake and colored feather scarves string through the audience. A rhythmic beat dramatizes the air as each scene carries a message: if music be the food of love, play on.

The NMU Theatre and Dance Department kicked off Fringe Festival on Thursday, Oct. 4, at the James A. Panowski Black Box Theatre with this year’s theme titled “Fighting for the Arts.” The show continues at 7:30 p.m. on Wednesday and will play through Saturday.

Unlike other productions, Fringe Fest comes from a place of unique and unstructured theatre. It arose in Edinburgh, Scotland, when eight theatre groups were shunned from performing in the 1947 Edinburgh International Festival. Thus, they decided to arrange their own productions that led to the birth of the “fringe” concept. Though the NMU theatre and dance department is taking this idea on a smaller scale, the meaning still carries throughout the 12 scenes.

“[Fringe Fest] is a way for people to express themselves and get away from studying. It allows for their humanity side to come out,” fifth year, music education major Kyle Mol said.

The 12-part saga mysteriously connects audiences through the accompaniment of OM (Open Mind), which is a group of students under the direction of NMU professor Carrie Biolo that incorporates a variety of different sounds. Being a part of OM (Open Mind) for Mol has
broadened his definition of what is considered music and how it can perceived, noting, even silence can be music.

Mol plays several roles in this production such as playing the trumpet, vocalizing on different songs and performing a samba where he clanks two Brazilian repinique sticks together. There’s one scene where he jumps into one of the scenes, he said. With this production, there are no rules as to what dictates what is art, Mol said, explaining, the music for Fringe Fest is like “mass chaos” where there’s tons of improvisation in how all of the music is layered together.

One of the dance scenes called “Doubt,” choreographed by junior, theater major and dance minor Stilwell, appears almost frightening with a serious tone and look in each of the dancers’ faces, but for actors like Cara Green—senior earth science major and environmental studies minor—this dance piece was one of the reasons she got on board with Fringe Fest.

“From bouncing around ideas to helping with occasional choreography, it’s been my pleasure to be so involved with the creative process,” Green said. “I’m most excited for my friends at NMU to see the dancer and artist within me that is often forgotten. I’m also very excited to see what the community has to say about this avant-garde production.”

Though this is Green’s first NMU production, it was her friend Stilwell who convinced her to be a part of it. With their special bond and “passion for dance,” it was a no-brainer to collaborate with her friend on this dance piece. Green’s scene, specifically, revolves around a theme of self doubt and how challenging it can be for an artist when this emotion takes over, Green said.

The “Doubt” dance scene was “electrifying” to witness for junior psychology major Liam Deephouse who attended Saturday’s performance. The emotion it entailed was not only “off the chain” but Deephouse said it had him questioning a lot of things.

“It was out of hand but it was interesting to see the concept revealed in a variety of ways,” Deephouse said.

With childhood experience in dance, it’s been “exciting” to tap back into the creativity of an artist by studying other dancers and pieces, Green continued. But with the short amount of time this production allowed, Green said she had to rely on adding her own “creative flare” by adding that into her movements to make each performance “unique” and “raw.”

The cast only had three weeks from the time of auditioning to the first performance to nail each piece flawlessly. Juggling school and work on top of a theatre production is not easy but with a “great support system,” it’s made the long hours pay off, Green said.

This year’s theme is all about fighting for creativity and it incorporates music, acting and dance all into one production, Green noted. Some scenes are more light and heartfelt whereas others are more dramatic and intense that make some political statements such as how the government regards art funding. Fringe Fest is not your typical play because it’s “very diverse” and open to anything, she said. And this year, the boundaries are nudged to their limits and people can expect to be surprised by the unexpected, Green said.

“Come with an open mind and explore what it means to fight for the arts. I recommend all NMU students and the Marquette community to attend Fringe Festival. Not only will you support the arts, but you will be connected to the art community in new ways…to get a taste of the diversity that NMU’s performing arts department has to offer,” she added.