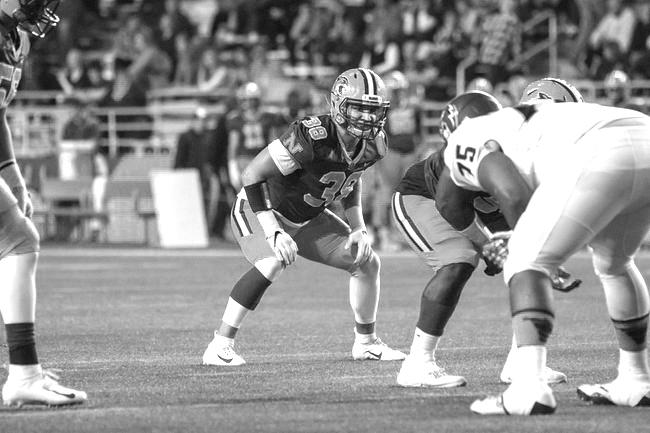 Freshman linebacker Isaac Darkangelo sets up before a play as he stares down a Northwood lineman. Photo courtesy of NMU athletics

That’s about all you can say about last weekend’s game at the Superior Dome, where the Northern Michigan University Football team won on the stat sheet, but ultimately fell on the scoreboard, 27-24 to then-winless Northwood University (NU).

The Wildcats are now 1-5 on the season with a 0-4 mark in GLIAC play, while the Timberwolves picked up their first win to improve to 1-5 and 1-3 in conference play.

NMU head coach Kyle Nystrom said after Saturday’s game that despite topping the Timberwolves in offensive yardage and time of possession, things just didn’t fall in his team’s favor in the end.

“I’m crushed for our kids right now because they battled, man,” he said. “They battled, they fought. Things don’t go right, they keep fighting through and we just ran out of time. We had them on their heels.”

One of the biggest game-changers occurred with the Wildcats down 20-17 early in the fourth quarter. With the NMU defense forcing a 3rd and 8 on the Northwood 17, pass rushers went after Timberwolves’ QB Christian Martinez. The pressure nearly got to Martinez as he was halfway brought down to the ground, but he somehow managed to throw to a wide open Alex Spicuzzi for a 75-yard completion on a blown coverage.

NMU junior safety Troy Mayon chased down Spicuzzi to save the touchdown, but the play setup 1st and goal from the NMU four-yard line.

The Wildcats forced another third down after that, and the ball was picked off in the end zone but was called back against the Wildcats for pass interference, giving NU a fresh set of downs as a result of the penalty. The Timberwolves capitalized as running back Corey Burdgick made a two-yard touchdown run to make it a 10-point lead.

NMU redshirt freshman quarterback Kole Stealy found sophomore wide receiver Ravon Johnson for a five-yard touchdown pass to pull the Wildcats back within three points with 7:38 remaining in the game.

The Wildcats forced a quick Northwood punt during their next possession. With a chance to take the lead, Stealy threw a deep ball from the Northwood 40-yard line looking for junior receiver Ryan Knight in the end zone. Knight initially had it, but it was bobbled and softly fell into the hands of Northwood cornerback Keenan Williamson for an interception.
NMU had one final drive after that but were forced to punt as Northwood ran the clock down to zero to end the game.

Senior running back Jake Mayon finished with 256 yards rushing on 32 carries, while the two NMU quarterbacks, Stealy and sophomore Latrell Giles completed a combined 10 of 24 passes for 187 yards, two interceptions and one touchdown. Johnson led the receiving corps with four catches for 106 yards.

NMU now looks to its third road trip of the season to face 5-1 Saginaw Valley State. The Cardinals also hold a 2-1 GLIAC mark after falling to Ashland 21-17 on the road last week.
NMU defensive coordinator Kirby Cannon said it’ll be a challenging feat to stop the SVSU offense this weekend.

“Saginaw is a good, solid football team,” Cannon said. “We’re looking at them as having one of the better quarterbacks in the conference. They don’t make a lot of mistakes, they don’t put the ball on the ground, they’ve had a couple of interceptions but a couple of those have been tips. There are not many cracks in their armor, they’re nice and solid.”

Darkangelo said he hopes the bad bounces are behind them going into this weekend.

“We’ve just got to fix the small things,” he said. “We had some good three-and-outs all game, we just need to pick up on the little things, figure out what we need to do to pull out some turnovers on defense. We need to keep rolling, keep the energy up and hopefully, we can get at it this week.”

Kickoff from University Center, Mich. is set for 1 p.m. on Saturday, Oct. 13.