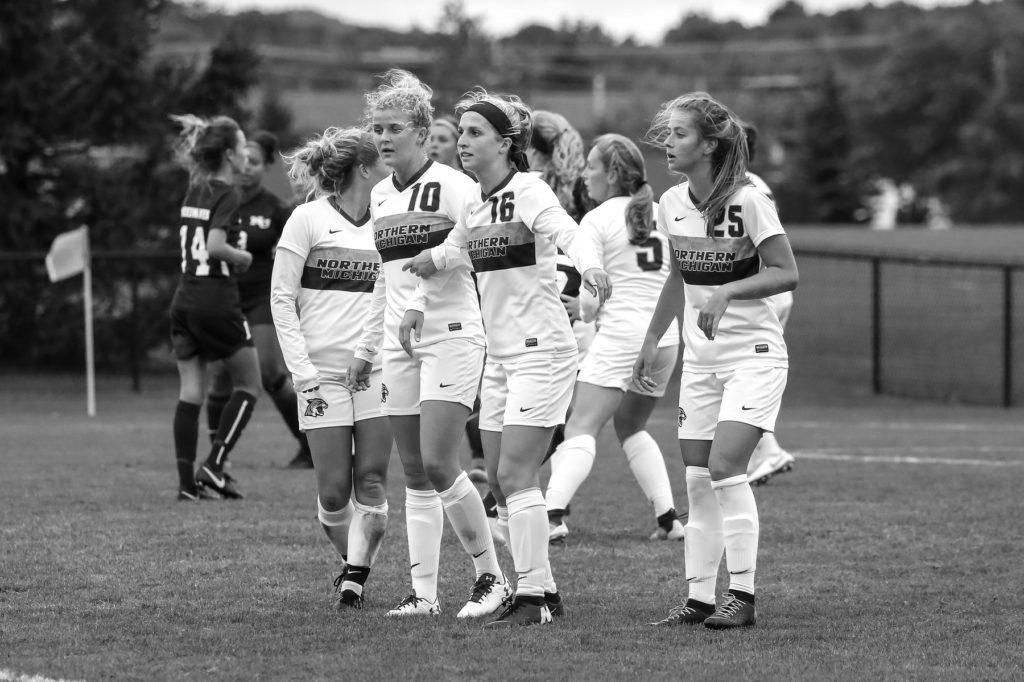 Team senior captain Aimee Colla (no. 16) stares downfield with teammates during a break in play.

The Northern Michigan University Women’s Soccer team hit the road this past weekend for two conference matchups. Northern entered the weekend on a two-game losing skid.

On Friday, Oct. 5, the Wildcats visited the Davenport University (DU) Panthers, then traveled to Allendale for a date with the Grand Valley State University (GVSU) Lakers Sunday, Oct. 7. NMU dropped both games by a score of 1-0, extending their losing streak to four games.

Despite the four-game skid, senior captain Aimee Colla has seen good things from the team.
“It has been unfortunate these past games because our team has been playing very well,” Colla said.

The Wildcats started strong Friday. NMU used excellent ball control and a high tempo attack, giving them a 6-2 shot advantage 30 minutes into the first half. The final 15 minutes of the first half belonged to the Panthers. Davenport turned up their offensive pressure and recorded five shots before the half was over. Heading into the break, the two teams were deadlocked at zero. The DU defense held NMU without a shot on target, however, Davenport put four shots on net.

Davenport started the second half the same way they ended the first, with constant pressure on the NMU goal. Panther forward Madeleine Zayan beat Wildcat senior goalkeeper Emma Vermette to take a 1-0 lead in the 67th minute. Davenport midfielder Ashlyn Skidmore sent a ball between two defenders, while Zayan timed the run perfectly and got in behind the Northern defenders. Zayan and Vermette were in a race for the ball at the top of the box, but it was Zayan who would get a touch on the ball first, as the ball rolled into the right side of the net. The final shots in the game were 17-16 in favor of Davenport, with DU putting five shots on goal while the Wildcats had two.

Sunday’s game would be a test for the Northern Michigan defense. The Lakers came into the match with the second-best offense in the country, averaging more than four goals per game.

GVSU’s high powered offense showed itself early in the contest as the Lakers took the lead in the 3rd minute. GVSU forward Madeline Becker found the loose ball at the top of the box after bouncing around off of a couple of deflections. Becker sent the ball into the net, giving a 1-0 lead to the Lakers. The rest of the first half was dominated by GVSU, with the shots at halftime standing at 15-1 in favor of the Lakers.

The second half was more of the same, with GVSU’s offense overpowering the Wildcats. The Lakers were unable to extend their lead before the match was over, however, Northern failed to record a shot on net during the remainder of the game, resulting in another 1-0 loss. The game’s final shot count was GVSU 32 compared to NMU’s two.

“Our defense is outstanding and I am proud of all those girls who never let up in our defending third,” Colla said. “They are so great.”

After a scoreless weekend, Colla believes hard work on the training ground will improve the team’s offense and break the Wildcat’s three-game goalless drought in the upcoming matches.

“We know we are a great team,” Colla said. “We will be focusing on one game at a time and working hard on our offense to create more opportunities to put the ball in the back of the net.”

The Wildcats return to the NMU Soccer Field for their final home contests of the season when they host the University of Wisconsin-Parkside at 1 p.m. on Friday, Oct. 12, and against Purdue University-Northwest at noon on Sunday, Oct. 14.