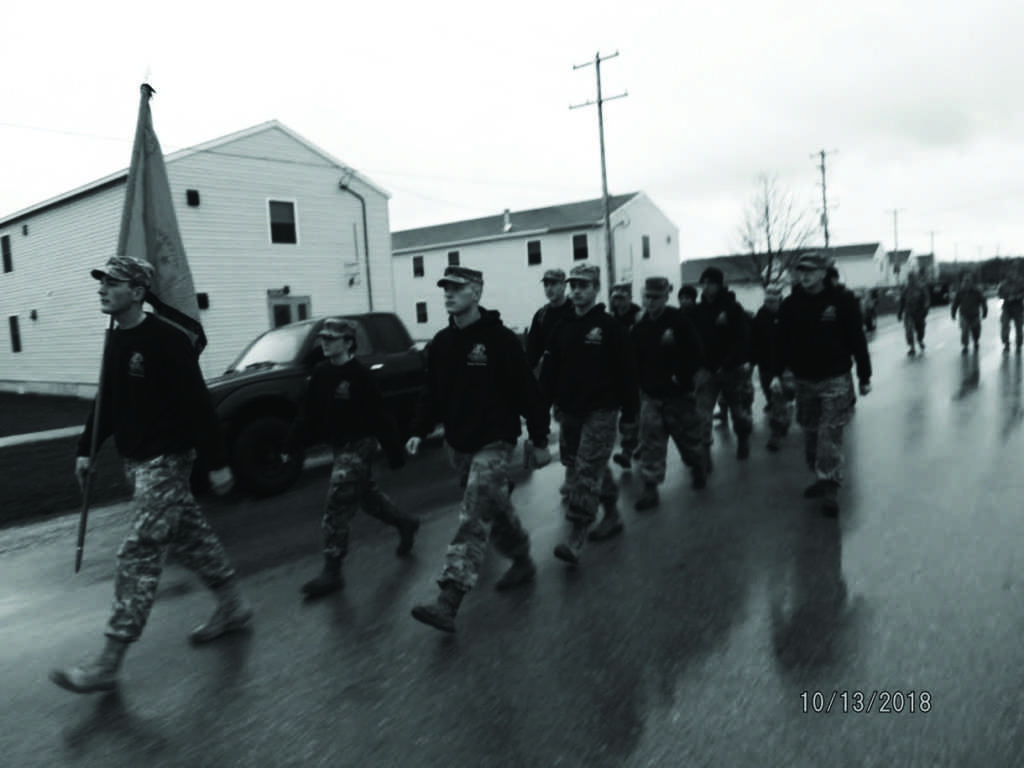 Elite cadets of Northern Michigan University’s ROTC program march in line down a street in Fort McCoy during a Ranger Challenge competition, which is the ROTC’s varsity sport. Photo courtesy of NMU ROTC

Elite cadets from NMU’s ROTC program traveled to Fort McCoy last Friday to endure mental and physical challenges as they competed in the Ranger Challenge competition, the ROTC’s varsity sport. The Ranger Challenge takes place every October in different regions across the country. The first-place winners from each region then go on to compete in a national level.

The competition helps cadets to prepare for a future career as an officer in the U.S. Army. Through the mental and physical demands of the competition, cadets gain an invaluable experience that reinforces the leadership skills that they learn through the ROTC program.
The competition included two divisions: a nine-man team and a five-person co-ed team, led by junior criminal justice major Kendra Curtice. Both teams took second place in their respected divisions. The competition pushed Curtice to be a better leader and plans to return as captain next year, she said.

“Being captain had its challenges, but I had a great team and they were there to support me the whole way,” Curtice said. “After five weeks of training we became a family to each other.”

During the grueling 48 hours, cadets had to successfully complete various events: grenades, a one-rope bridge, tactical combat casualty care, which teaches life-saving techniques and strategies for providing trauma care on the battlefield; a call for fire, which is a concise message prepared by the observer that contains all information needed by to determine the method of target attack; a written exam, an assault lane, weapons assembly and disassembly, land navigation, obstacle courses and a forced road march. Cadets also slept outside in tents during the frigid October night.

“The competition was ran in a different way than it had been in previous years. We were thrown a curve ball and pushed ourselves as much as we could,” Curtice said. “I am extremely proud of my team for the motivation that they brought and the encouragement that they gave to other teams.”

The nine-man team was led by Mackenzie Harris, senior construction management major. Nine-man team member and junior criminal justice major Zachary Truxton, competed in the competition for the second
year in a row.

The team dynamic was exceptional, and Harris was a great captain and did a great job in preparing the team for preparation, Truxton said. Because they were the smallest task force of all of the schools at the competition, taking second was a big accomplishment, he added.
“We really worked as a team, we knew each other’s weaknesses and strengths. We motivated and pushed each other,” Truxton said.