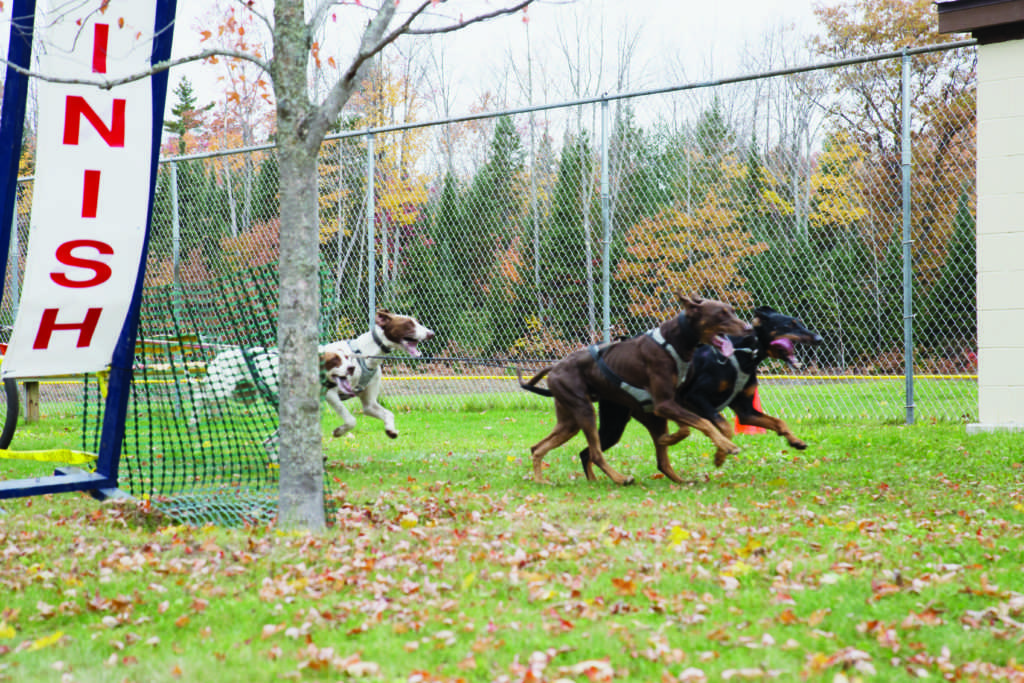 Dozens of howling huskies and chinooks huddled in trailers for warmth while others sprinted in circles, waiting for the race to start. After the teams of dogs were fully harnessed, the excitement glistened in their eyes. They’ve been preparing months for this moment. When the racers shouted to their huskies and chinooks, the dogs began to bark in the brisk October breeze. As they lunged through the fluorescent orange chute, hooked to bikes and scooters, the crowd cheered. The jingle of their harnesses and the applause from children to the elderly sent the teams dashing into the forest to claim the top prize in the U.P. 200 Dryland Dash (UPDD).

Before the Iditarod qualifying event in February, sled dog racers had the opportunity to warm up in the UPDD in Negaunee this past weekend. Co-sponsored by the Upper Peninsula Sled Dog Association and the Wisconsin Trailblazers Sled Dog Club, 15 teams from the U.P., Maryland, Milwaukee and Quebec participated.

Though the UPDD is much shorter than February’s U.P. 200, the two trails offered the teams a tuneup before the snow hits. The race distances included 1 mile and 2.25 miles instead of the strenuous 230 miles through deep snow, creek crossings, hills and isolated trail. Race winners were awarded with a $2,000 prize.

The U.P. has a long history of sled dog racing. Tails of the trails began in Marquette in 1988 when two families discovered their mutual passion for sled dog racing. The families dreamed of having a race in the Upper Peninsula, with the trail running through Marquette, Delta and Alger counties. Financial and community support snowballed throughout the region as local businesses and community members volunteered their time to make the dream a reality. The U.P. 200 website recalled on a snowy February evening that in 1990, the first 10-dog sled team raced through the chute.

For Negaunee local Kaitlyn Dehlin, a French cartoon about sled dog racing is what sparked young Dehlin’s passion for the activity.

“I started hooking my animals up to bins that we had in the garage and had them pull me down the carpet hall- ways,” Dehlin said. “And then I came up here for college and volunteered for a couple U.P. 200’s and I was hooked.”

The earth-toned poster for the event mimicked the bursting fall colors over the peak weekend for the changing scenery.

“The trail was a bit soft in spots but it was actually quite lovely. The leaves were falling and it looked like a forest on fire,” Maryland native and racer Emily Chamelin said.

“I love the U.P. The people are lovely and the terrain is always so beautiful.”
Despite the technicality of the trail, several racers commented on the well-maintained trail, saying it was easy for their young dogs to navigate. For sprint racer Jennifer Lyons, sled dog racing is more than just a well-maintained trail.

“[Sled dog] racing is a lot of work. You don’t just go in to win ribbons. It’s all about the love of your dogs,” Lyons said. “It’s the number one priority. These dogs are my best friends, they work for me [and] I work for them. It’s a partnership.”

The race was an opportunity for dogs and their owners to deepen their bonds, Lyons added.
“As mus,=hers and performers, we do everything we can to make sure the dogs are hydrated, nourished, gone potty enough, get enough sleep and stay warm,” Lyons said. “These dogs are athletes, just like Michael Jordan. The most important part of being a musher is taking care of the dogs.”

The UPDD is a way for racers and dogs to race when there is no snow, some racers even hook their dogs up to ATV’s, a racer said.

“You sit around all summer waiting and waiting for cool temperatures, and all a sudden it cools down and then you
get to race again,” Lyons said. “It was a long drive, I had to drive eight hours to get here — but it was worth it. It’s beautiful up here, the course is challenging but fun.”

Kathleen Vincent, from the Milwaukee Mushers, raced in the one and two dog bikejour with an unsuspecting trio: a three-year-old Siberian husky named “Siberia,” a blind four-year-old pup named “Kena” and a nine-year- old therapy dog named “Anook.” Vincent returned to the UPDD after two years of running in the event when it first started in Marquette, she said.
The team finished last due to the senior dog, but Vincent said she runs regardless of placing, and lets her dogs do what they like best: running.

“This event is my passion. I get to go back to the next week motivated to do more things because I spent time with my best friends all weekend,” Vincent said. “This race is a really fun one and I’m so glad the U.P. puts it on.”

U.P. 200 Dryland Dash Race Chairman Tim Trowbridge said he is surprised every year by the distance racers are willing to travel for the Dryland Dash. He noted that the racers were happy to be able to compete.

“I’m happy to see the community come together, and to see the faces of the mushers when they finish. Some had a little mud on their faces and they still were able to smile,” Trowbridge said. “Everybody is happy to be together again because this is the first race of dryland season.”