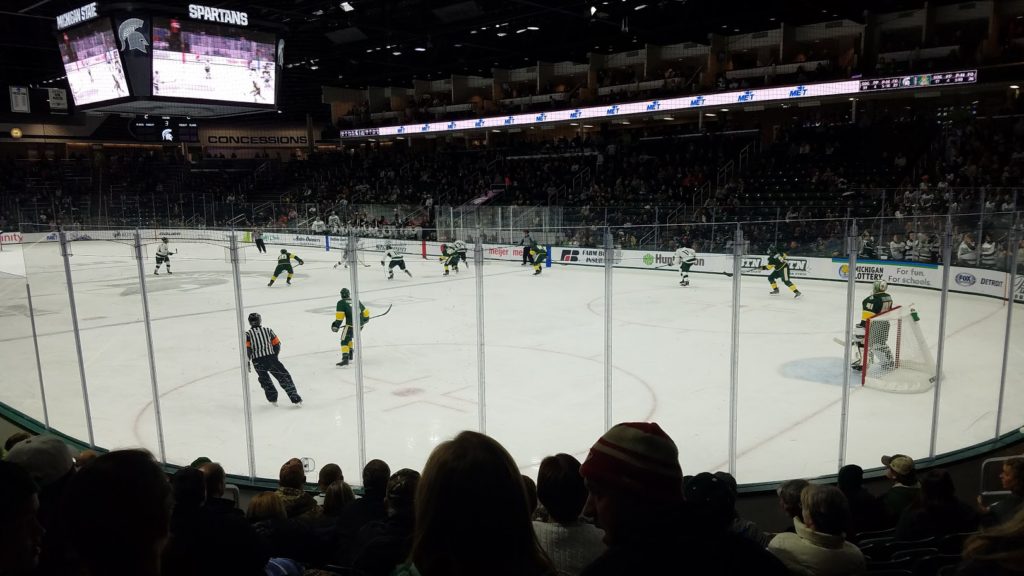 Northern Michigan University Men’s Hockey returned to the campus of Michigan State University for the first time since the disbandment of the CCHA conference.

The Northern Michigan University Men’s Hockey team opened their season last weekend with their loftiest expectations in recent memory. The team struggled out of the gate, dropping a 4-2 matchup against the Michigan State University (MSU) Spartans on Friday night before bouncing back on Saturday and winning 4-3.

Without having a tune-up game before going up against their in-state rival, head coach Grant Potulny wasn’t sure what he was going to see from his squad.

“Number one, you haven’t played any games yet, so you don’t know where you stack up against your competition and I just thought we played, and they did too, so poorly that you don’t know how you even evaluate your team,” Potulny said. “It was just a weird game. Saturday looked more like us. We had much more energy, we were quicker, we were winning races, we had physicality.”

Michigan State scored the first goal of the game when senior defenseman Zach Osburn found an open lane during an NMU penalty kill and launched a wrist shot that beat Tolvanen clear over the right blocker pad.

The Wildcats responded just three minutes later when senior defenseman Tony Bretzman launched a puck toward the MSU goal. The shot went wide of the net but ricocheted off of the boards, hitting the MSU goaltender’s foot and bouncing into the net. The score remained 1-1 heading into the first intermission.

Junior forward Darien Craighead evened the score midway through the second period to tie the game after converting on a two-on-one breakaway with senior forward Adam Rockwood.
The Spartans again outshot the Wildcats in the period, this time by an 18-9 mark.

The game would remain tied until the 18:46 mark of the third period on a goal by MSU sophomore forward Mitchell Lewandowski. The Spartans would add an empty net goal to seal a 4-2 victory.

Potulny saw good things in the loss but knew the team needed to adjust their game plan for Saturday’s game.

“For us to find out where we really are, we’ve got to make sure we have two good performances,” Potulny said.

The Wildcats got on the board first Saturday night when sophomore forward Joseph Nardi took an outlet pass and skated down the left wing, firing a wrist shot that beat the MSU goaltender Drew DeRidder.

Rockwood helped recapture the lead for NMU on a shorthanded goal just a few minutes later. NMU’s penalty kill led all of NCAA Division I a season ago with nine shorthanded goals. The Wildcats weren’t satisfied yet and added another goal from senior forward Denver Pierce, who banged home a loose puck in front of the Spartan net. NMU lead 3-1 after two periods of play.

Michigan State came out firing to start the final period, scoring two goals in the first 1:46 to even the game at three-a-piece.

Craighead came up large shortly after, scoring a power-play goal that would stand as the eventual game-winner. Craighead led the team a season ago and all of college hockey with six game-winning goals.

After the hard-fought win on Saturday, Potulny was pleased to see the resiliency the team displayed.

“We had controlled the whole game,” Potulny said. “The goals that they scored in the third period, one was like kind of a seeing-eye shot from the blue line and the other one, you win a draw and the ice was rough in a couple places and we go to clear it and it kind of rolls over our stick and it’s a slam dunk. We had played so well and it wasn’t like we had got seamed or we had a breakdown, it was just two quick goals.”

Northern continues their opening road schedule against the No. 4 ranked St. Cloud State Huskies this weekend. Puck drop is set for 7 p.m. on both Friday, Oct. 19 and Saturday, Oct. 20.