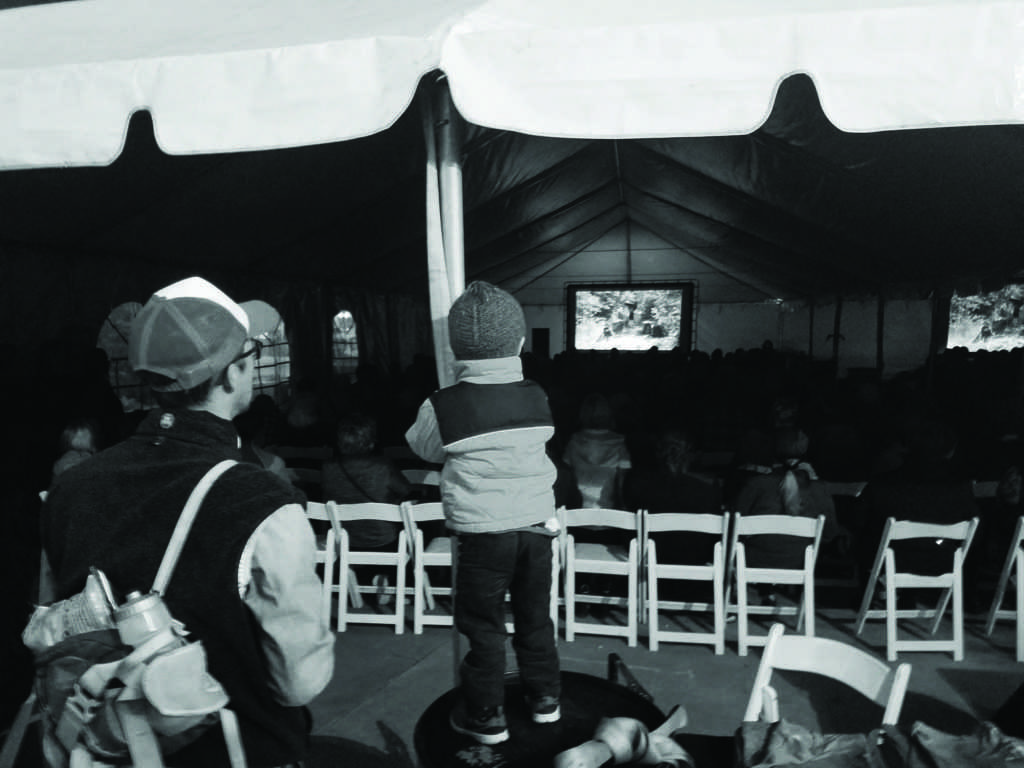 A Marquette boy watches intently as the first film of the festival begins. Photo by: Cole Stefl

A crescent moon nested in a velvet blue sky. It hung over the Thursday night crowd of over 100 people sitting, standing or huddling under an insulated white tent, while their faces lit up from the blue hues of the screen at the third annual Fresh Coast Film Festival (FCFF). The warm smell of stone-fired pizza billowed through the chilly air. Festival-goers wore marshmallow-like puffy jackets, and babies donned North Face expedition onesies. There was a sprinkle of NMU students. A woman’s voice directed the attention of attendees, “alright everyone, it’s film time,” and herded the rosy-cheeked crowd of hundreds into the main film area.

The idea of Michigan as fly-over territory to travel to the “big mountains out West” sparked the FCFF. Board member and one of the festivals co-founders, Bugsy Sailor, said they thought that was ridiculous because of world-class ice climbing in Munising.
“Everyone in the world should know that any single outdoor activity you want to do [in Marquette] is within a 5- to 10 -mile range, and you can be out in the middle of nowhere,” Sailor said. “We just wanted to showcase what the Great Lakes has to offer,
as well as create conversation
and storytelling as to why it’s
important to them.”

The FCFF is the first of its kind: a documentary film festival celebrating the outdoor lifestyle, water-rich environment and resilient spirit of the Great Lakes and Upper Midwest. The festival gathered the best in environmental and cultural filmmaking from around the world, creating a venue for 130 films, fifty percent of the films were about the culture of Great Lakes storytelling.

“There’s very inspirational, adventure, hardcore content— but it really comes back to storytelling and inspiring. We really want
to engage the community. It doesn’t matter if it’s children or elders,” Sailor said.

J.J. Kelley, a correspondent for National Geographic and keynote speaker said, “This type of film festival is a chance to create a community. You have different venues where you can travel to, you can run into people in the streets, where everything is not under one roof but it is not so spread out.”

Kelley said the FCFF is his
favorite type of film festival, as he went to school in Duluth, so this
is like coming home to his “neck-of-the-woods.”

“While we’re still young and small, [the festival] is pretty easy
to [enter]. Especially when it comes to local filmmakers, I would say that we have a very low barrier to entry,” Sailor said. “Even if
it’s someone’s first film, that’s
fantastic.”

NMU has partnered with
Fresh Coast for all three years to get NMU students engaged in
the events, whether that’s inspiring them to create a film or to take a
trip around Lake Superior,
Sailor said.

The FCFF creates a community for filmmakers to try different things and new techniques, Kelley said.
“These people that are trying things, that are pushing boundaries and the craft forward [is not] the kind of stuff you are not going to see on TV,” Kelley said.

FCFF has one film that was made by a nine-year-old who attended the film last year and wanted to make something, Sailor said.
“Documentaries have changed so much in 15 years because of these little experimental grounds,” Kelley said. “We can try new things, create new teams of filmmakers and go out and tell bigger stories next year.”
The majority of the festival goers lived a stone’s throw from the event, but Colleen Dempz traveled from the Big Rapids area to visit with her grandchildren who were attending the festival. The festival transformed boundaries and created a space for environmental storytelling, as well.

Nine-year-old Nina Fassbender volunteered at the event and was inspired by the film, Lilliana Libecki: The Joyineer, where a father-daughter duo hiked in animal masks and conducted humanitarian work Peru as a part of the Human Outreach Project.
“I liked it because they were doing humanitarian work, it was about kids helping each other. They added solar panels to roofs and brought them computers,” Fassbender said. “It’s called the Joyineering fund.

I would recommend doing it if you like helping others in need.”

Fassbender said she now wants to hike Hogback Mountain donning her red dragon mask. Another NMU student in the crowd said “It was really beautiful. I cried,” in regards to Libecki’s movie.

After attending the festival for a few years, senior marketing major Carter Olson said he’s lucky to be working for it. He created a recap video for the promotion of next year’s festival, which he said makes the content a little better each year.

“This festival gives a sense of how strong the community is here,” Olson said. “The support everyone has for each other helps not only Marquette grow, but the creative industry inside of it.”