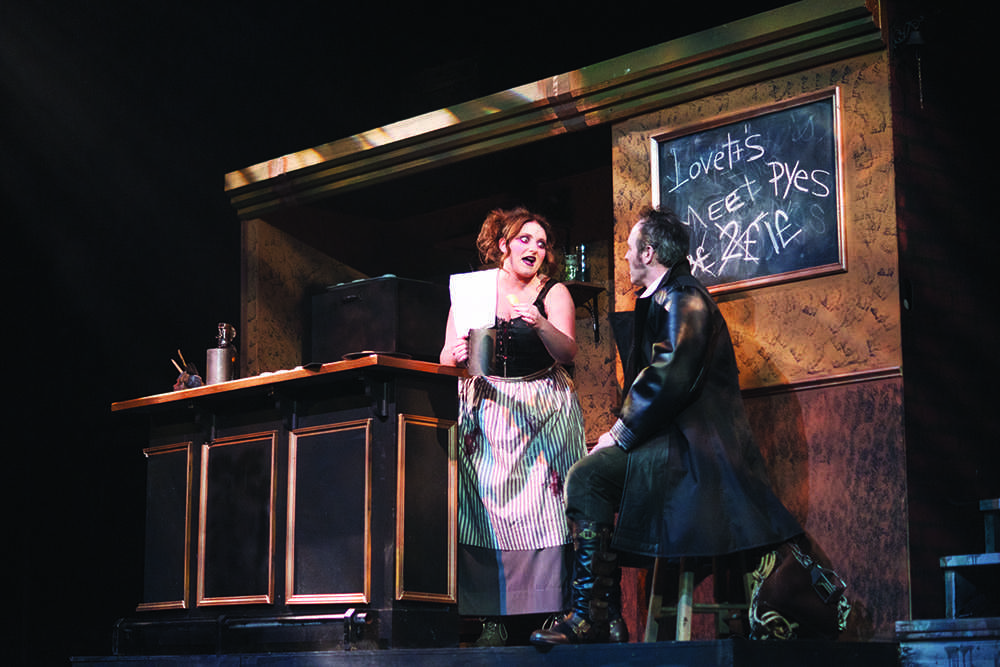 The room was dark. Very dark. An actor from the ensemble walked along the side aisles in the Forest Roberts Theatre (FRT) and rose a large torch prop to light the theatre. An eerie orange glow dimly lit the room, enough to make out the silhouette of the actors. They sat on stage waiting for their opening song, like wolves awaiting their hunt. Once the music began, the cast came to life and sang to the audience, “Attend the tale of Sweeney Todd, the demon barber of Fleet Street.”

They sang with a multitude of emotions and expressions; some actors looked distressed while others wore gleefully sadistic grins. There was a tension of evil that bled from the stage that invited the audience to embrace the insanity. What sealed the invitation was when Sweeney Todd, played by Professor Paul Truckey, walked onstage through a blanket of fog to end the song and begin the story with an evil smile and piercing eyes. The audience erupted into applause with shouts of praise singing from its front seats, and thus the production began.

“The talent is amazing,” NMU theatre alumnus Laura Thompson said. Thompson performed alongside Truckey
in NMU’s production of Les Miserables in 2013. She said seeing Truckey gave her a sense of nostalgia from her time at NMU.
“It’s really amazing to see them putting on something so amazing at a school I was able to go to,” Thompson said.

The famous musical is a horror tragedy laced with dark humor that tells the story of revenge, manipulation and heartbreak. Sweeney Todd was once a well-known barber in the city of London, known as Benjamin Barker. He had a wife and daughter whom he kept close and were a happy family. A corrupt man of the law, Judge Turpin, wanted to covet Todd’s wife and falsely charged him.

Todd was sent to exile in Australia for 15 years. He then returned to London with his family nowhere to be found, and swore vengeance upon the judge who had broken up his once happy life and family.

Todd’s bloodlust extends outside of his focus on the judge with the trusty work of his silver razors, and bodies begin to pile up.To dispose of the bodies, Todd fashions the barberchair to drop the bodies into the cellar in which the conniving Mrs. Lovett bakes their flesh into meatpies. As the murder and mayhem continue, Todd dives deeper into his insanity, leaving the audience to question if
he is throwing away his humanity, or perhaps embracing it.

The audience reacted to every moment of the play, applauding thunderously after each song. There was such prolonged laughter after every joke that the cast waited to continue the show. When a morbid event occurred, the audience would shift in their seats. An audience member whispered to another, “That is just insane.” Among audience members were NMU students and alumni who carried a long love for the FRT.

Freshman theatre major Toni Danz was incredibly impressed by the stage production and said the performance was powerful.
“It’s very professional,” Danz said. “It looks like a show you could see anywhere and not just at college.”

Danz said she was happy that she saw this during the Halloween season, and said it was spooky yet not overdrawn.
The FRT will show Sweeney Todd again at7:30p.m.from Nov.1-3 with a1:00p.m. showing on Nov.3. Tickets are $15 for the general public, $10 for students, and $5 for NMU students. The tickets can be purchased at the FRT, the Berry Events Center or online. The cast invites you to come for a shave in this gothic malicious musical and attend the tale of Sweeney Todd.

Outside the entrance to the theatre featuring “Sweeney Todd: The Demon Barber of Fleet Street,” is an art display of paintings and a few crafted models. All are horror themed, dripping with a dreading tone of expressionism. A painting of a man holding an empty leash while standing before the mythological monster, Cerberus, is at the center of the paintings. This intriguing artwork was made by Mitch Crawford, the brother of the Forest Roberts Theatre (FRT) guest director of Sweeney Todd, Keli Crawford-Truckey.

The entirety of this production was done in honor and remembrance of Crawford, who took his life a year and a half ago. Crawford suffered from OCD and many other forms of mental illnesses. After taking medicine for a surgery, the medication aggravated his mental illness. Crawford lost his relationship with his wife and children, his job and his sense of self. He was checked into a hospital, but Crawford-Truckey believes her brother was released too soon. The plan was for them was to live together so Crawford-Truckey could help him, until Crawford ended his life.

“Even though I knew it was coming, part of me feels the guilt of knowing that I could have at least prolonged his life,” Crawford-Truckey said. “I’m now strongly compelled to reach out to other people to get the topic of suicide more mainstream spoken versus stigmatized.”

She said she doesn’t want people to see suicide as cowardly, but does not wish to see it glorified or romanticized.

“It sucks, it just fricken sucks everywhere that I am,” Crawford-Truckey said. “Losing him was like part of me is gone, so I’m constantly trying to bring him back and that’s what this is for me. Introducing people to him and letting people see his art makes me feel like he’s alive again for a moment.”

Crawford-Truckey said that this is where the inspiration to put on Sweeney Todd came from. She said the cages trapped Crawford and he couldn’t find his way out. In Sweeney Todd, there are countless metaphors and allusions to birds and cages. In the play there is literal confinement where the judge incarcerates Todd’s daughter, Johanna. Crawford-Truckey incorporated cages to the architecture and costumes wherever possible, and gave each character birdlike characteristics.

Each character embodies a bird fighting his or her way out of the cages they have been trapped in or put themselves in. Crawford-Truckey used this idea to twist Todd to fit her brother into the character as a bird who has been trapped by others and also himself. Crawford found artistic influence from the crow, as Crawford translates to “crow from the fjord.” He felt attached to his family name of Scottish heritage. His series of works titled “Brother Beast,” particularly the painting of Cerberus, inspired Crawford-Truckey to ask herself what madness was, and came to realize that the musical Sweeney Todd was the play that would truthfully ask and answer that question.

Some of the artwork Crawford made was found in his backyard, covered in weeds and dirt. Crawford-Truckey said it shows the state of mind her brother was in by tossing a piece that he put so much care and effort into.

“He thought he had lost everything in his life and didn’t know how to get it back,” she said.

The art is no longer covered in filth, and is now cleaned and proudly displayed.

“Here is two hours of entertainment,” she said. “Let’s walk back into your actual life, leave the story behind and walk into reality. What’s your reality? Are you at a point where you are in such pain that you would welcome help?”

Crawford-Truckey incorporated this question into her tweaking of the ending with Todd. She made sure that Todd’s final act in the play was of his own decision instead of it being done to him without his consent.

Crawford-Truckey does not want to see people walk out of life and has provided a list of suggestions to those considering harming themselves which are available outside of the production.

Alongside the imagery of grim, despair and horror, Crawford-Truckey hopes to offer help.