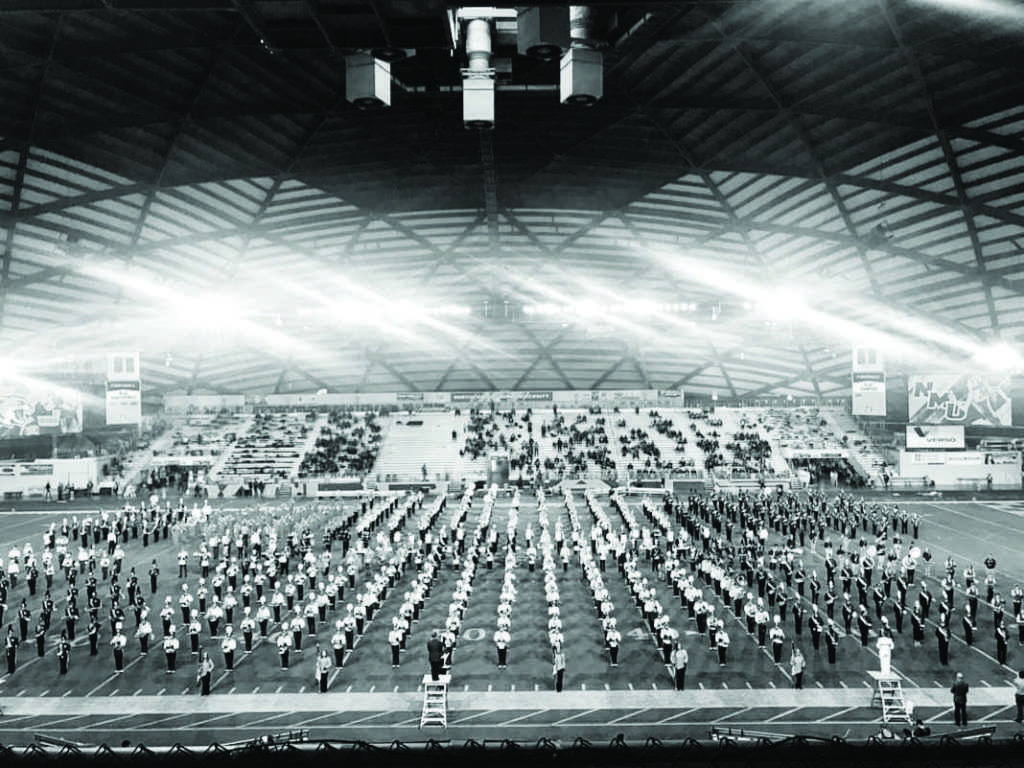 Members of the NMU Marching Band perform during a football halftime show, displaying their dedication to perfection. The band has a record of 122 members this year, beating the 1970s marching band number of 120. The football halftime season has ended and the band now focuses on hockey prep and winter commencement. Photo courtesy of Teressa Savastano

With great discipline and an overwhelming passion for music, the Northern Michigan University Marching Band, often called The Pride of the North, worked this season with a record number of 122 members.

In perfect uniform, sporting NMU colors, the band rushes out onto the field at the
beginning of every home football game and never cease to impress with their music and difficult formations at each halftime.
The Wildcat Marching Band Director Stephen Grugin Ph.D. has been directing for 22 years. He feels that breaking the record size for the first time since the 1970s added a great amount of energy to the season.

“I remember getting here and everybody telling me about the glory days. So my goal was to always have 120 people, now we’re at 122,” Grugin said. “It got us excited right off the bat.”

Learning a new halftime show every week, the season takes off with rehearsals every day of the week before classes start. The band focuses on fundamentals and ensures that the final product is polished for audiences of the first home football game. This year, the Pride of the North kicked off their season of six home football games with a
tribute to the famous 70s
band Chicago.

The student leadership of the band, along with Grugin, meet the spring before every season to discuss music selection with the exception of the final show, where senior band members choose their favorite songs from previous seasons to end their
marching.

For the class of 2019, they ended this year with “Phantom of the Opera,” Rocky Horror Picture Show’s classic song “Time Warp” and Michael Jackson’s “Thriller,” where the entire band performed the iconic dance.

First-year Co-Drum major
senior biology and zoology major Teressa Savastano is still in awe about the success and growth that has happened over this year’s
season.

“It’s been phenomenal, still something I can’t believe,”
Savastano said.

Watching the band is something current Co-Drum major junior multimedia productions major Nate Miron has grown up with. The fact that Miron now holds a
leadership position is still baffling,
he said.

“I came here, went through the ranks and now I’m in charge of it,” Miron said. “It’s great, terrifying, but amazing.”
When it comes to the process of halftime shows, Savastano sees it as a type of organized chaos.

“Putting it together is a lot: There’s on-the-fly thinking, frazzled eye contact across the field, arm flailing, hand motions and screaming,” Savastano said. “It’s so cool to watch it all come
together piece by piece.”

On game day, there is no time for nerves when performing
for a crowd, Miron explained that
everything from practice
becomes autopilot.

The marching season finished last Friday and the focus shifted to hockey prep, then to winter commencement. Grugin appreciates the determination of the band.

“I think what I get the most out of it is the students,” Grugin said. “They’re the hardest working students on campus.”
What it means to be a part of the band holds an incredible amount of
emotion for both drum majors. But when everything is said and done, Miron and Savastano believe that there is so much more than the music.

“The friendships that we make will probably last all of our lifetimes,” Miron said. “The marching band is one giant family.”