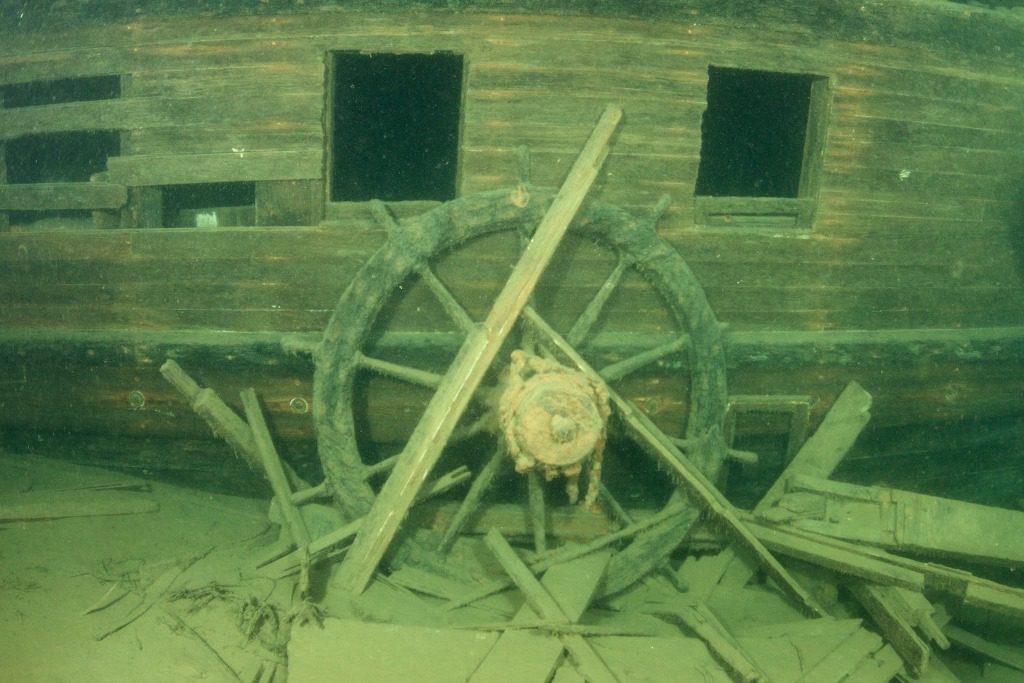 One clear night in May 1884, the J.S. Seaverns was unloading supplies at Michipicoten, Ontario. The tiny port on the northeast coast of Lake Superior needed provisions for the Canadian Pacific Railroad workers. While deporting from the dock, a rock struck the vessel, sending gushes of water into the ship and casting it beneath the surface. For over 130 years, the J.S. Seaverns has been vacant on the bottom of Superior undiscovered, untouched. It wasn’t until 2016 when a local maritime historian and his team gathered the coordinates to locate this missing vessel to find it in near “perfect” condition.

Dan Fountain presented his discoveries in “A Most Outlandish Place: the Wreck of the J.S. Seaverns” last night at the Marquette Regional History Center (MRHC).

“I was looking at some old maps from 1914 that had little [shipwreck] symbols. I saw this wreck called the Str. Safferin,” Fountain said. “I put two and two together and said that must be the J.S. Seaverns.”

With an overhead presentation, Fountain described the history of the railroad company, the history and wreck of the ship and how most of it remains untouched.

“We got the ‘X’ on the map and we thought we’d drive out there and she’d be right there,” Fountain said.

Though the 1914 map coordinates were not exact in locating the ship, it didn’t take long before a shape of a long boat appeared on Fountain’s radar. That’s when Fountain and his team knew there was a shipwreck 160 feet below. The crew then sent a few divers where they were able to capture underwater video footage. By the ship’s layout and cargo onboard, it was confirmed that the sunken ship was the J.S. Seaverns. Stacks of dishes still remained organized on shelves and piles of coffee mugs lay intact. Due to Canadian water regulation and laws, the team wasn’t allowed to remove anything from the scene, leaving Fountain a bit curious to what laid inside the ship’s cargo.

“That looks like a trunk,” Fountain said, pointing out a large box in one of the underwater photos. “I wonder if that’s a treasure chest.”

As to when Fountain will search for his next shipwreck, he replied by saying, “I can’t tell you. Or else someone else might get to it first.”

Carrying a full load of coal headed for Houghton, the Plymouth ran aground by Presque Isle. No one was injured and after the water froze, the coal was recovered and the the ship was restored the following spring. This was one
of three ships wrecked during that storm near Marquette.

Another November storm brought this wooden vessel to the beach near Founders Landing in Marquette in 1886. This two-masted schooner was built in Oswego, New York, in 1868, and met her fate in a blizzard after it crushed against the Marquette docks, where one fatality was recorded. The ship’s remains lay scattered in shallow water where on really clear days, you can spot the wooden bones of the ship.

Owned by Bethlehem Steel Corp., the Maryland was an ore carrier that had 27 men on board. With high winds gusting up to 59 knots, the ship was blown to shore near Chocolay. Twenty-one of the men were removed by the Coast Guard using a breeches-buoy system, while the rest were rescued by helicopter. This event marked the first time a helicopter was used on the Great Lakes. No fatalities were reported.

Lake Superior’s first commercial shipwreck happened 2 miles south of Whitefish Point with the schooner Invincible. It was built in 1802 by the British in Sault Ste. Marie and was owned by the Northwest Company. It mainly served as a fur-trading and general merchandise vessel during the War of 1812, but its final voyage entailed transporting an army force that was sent to deal with an uprising at Fort William. A violent gale overtook the ship sailing toward the middle of Whitefish Bay, sending the crew struggling for the shore. Though no lives were lost, the title of Invincible was no longer adequate.

“Superior, they said, never gives up her dead, when the gales of November come early.” The famous lyrics by Gordon Lightfoot devoted to the 29 men
who lost their lives on the Edmund Fitzgerald resonate the wrath of the dark, powerful waters of Lake Superior that blew on the turbulent November night
in 1975. Carrying a full cargo of over 26,000 ore pellets, the ship departed on Nov. 9, 1975, from Superior, Wisconsin. The ship was destined for a steel mill near Detroit and it joined up with another freighter called the SS Arthur M. Anderson. The next day, however, turned sour.

With a storm approaching, Captain Ernest M. McSorley (Fitzgerald) and Captain Cooper (Anderson) decided to take course in the northern waters where the two ships would be protected by the Canadian highlands. This route would lead them between Isle Royale and the Keweenaw Peninsula, where they would make a southeast turn for Whitefish Point. But hurricane-like winds and over 35-foot waves were becoming so intense that it was interfering with the Anderson’s radar watch of the Fitzgerald. At 7:10 p.m., Morgan Clark— first mate of the Anderson— called out to the Fitzgerald. “Fitzgerald, we are about 10 miles behind you, and gaining about 1.5 miles per hour. Fitzgerald, there is a target 19 miles ahead of us. So the target would be 9 miles on ahead of you.” Captain Sorley responded by saying they were holding their ground. Clark signed off by saying he’ll check back later. He called again at 7:22 p.m. but there was no answer. At 8 p.m., Captain Cooper called the Coast Guard.

The legend of “gitche gumee” brought down the great freighter in one of the worst storms recorded on Lake Superior and the ship remains as the largest to have sunk in the Great Lakes. After several searches, the Fitzgerald was discovered 535 feet below the surface on May 20, 1976. To honor the lives of those lost, the bell of the ship is on display in the Great Lakes Shipwreck Museum