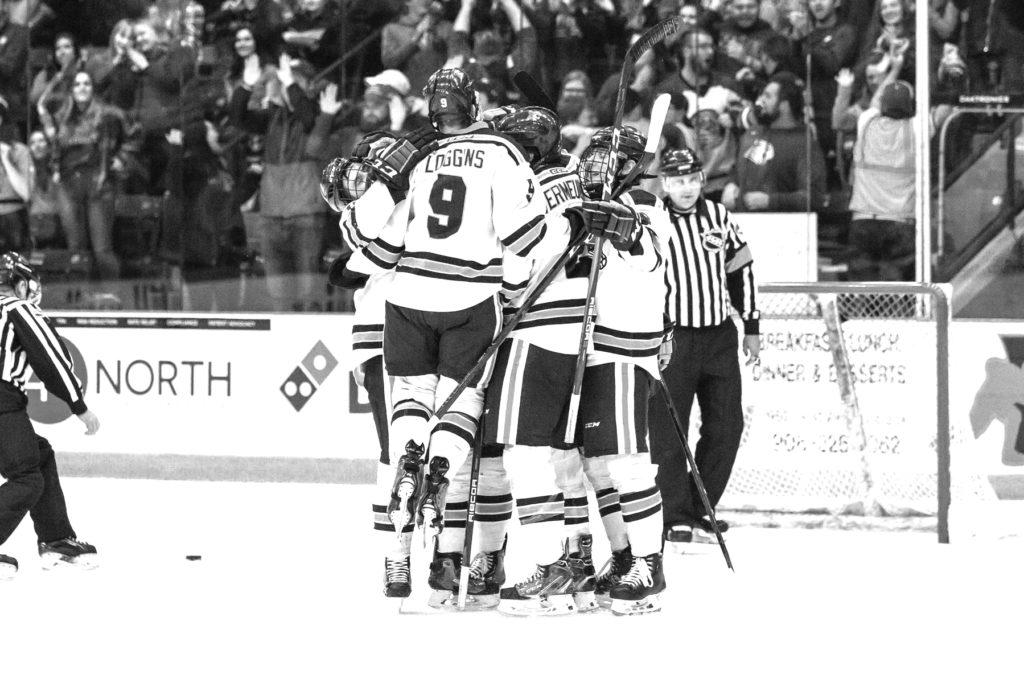 Members of the NMU Men’s Hockey team celebrate a goal from earlier in the season. Photo courtesy of NMU Athletics

It was a hard-fought battle for the Northern Michigan University Men’s Hockey team last weekend as they played their way to a 1-1 weekend record against the No. 8 ranked Bowling Green State University (BGSU)Falcons on the road.

BGSU came into the weekend series with the No. 1 ranked scoring offense, averaging 5.14 goals-per-game. The Falcons had demolished then-No. 6 ranked Ohio State University 8-2 in a game the weekend before the ’Cats arrived.

Friday night’s game was a heated competition between the two teams, amounting to 17 combined penalties.

BGSU got on the board first midway through the first period off the stick of Taylor Schneider, but the Wildcat defense held up for the rest of the period to keep the game within reach, only allowing the Falcons eight shots-on-goal.

The Falcons scored early in the second period to grow their lead to two. NMU senior forward Troy Loggins scored his first goal of the season halfway through the period while on the power play to cut BGSU’s lead to 2-1.

In the end, it was too much Falcons and another third-period goal would finish the score at 3-1 in favor of the home team.

Saturday night was a complete team effort for the ’Cats who skated away with a 2-0 victory. Senior defenseman Connor Frantti scored his first goal of the season and only the second goal of his career. In the third period, junior defenseman Philip Beaulieu blasted home his first goal of the season on a power-play chance 26 seconds into the period to help add some insurance for NMU.

Senior goaltender Atte Tolvanen was a brick wall throughout the game, stopping all 35 shots the Bowling Green offense threw at him as the Wildcats skated away with a 2-0 victory while earning two points in the WCHA conference. As a team, NMU only committed 11 turnovers in the game.

Head coach Grant Potulny sent waves of praise toward Frantti after the game had ended.

“Connor is for sure the most improved player that we have,” Potulny said. “He’s such a great person. He played himself into shape and really put himself out there to change the way he played the game.”

In holding the nations top offensive unit to three goals on the weekend, Tolvanen was honored with WCHA Goaltender of the Week honors. It was the first time this season a Wildcat has been recognized after the team had a combined 13 recipients during the 2017-18 season.

“Tolvanen has been spot on, given us a chance to win every night,” Potulny said. “It’s nice to see him get recognized.”

Another tough task lurks had this weekend as the ’Cats return home to face off against the No. 18 ranked Cornell University Big Red. Cornell struggled last weekend after getting swept by Michigan State on home ice, but Potulny knows this team is capable of bigger things.

“They’ve out-shot everybody,” Potulny said. “They outshot them [Michigan State] almost 2-1 both nights so they’re playing great. So as well as things were maybe going for Bowling Green, they’re [Cornell] just not scoring as much. We’ve got to make sure that continues. Games like this, you’ve got to get up there, you can’t chase them. We’ve got to score the puck.”

Puck drop from the Berry Events Center is scheduled for 7 p.m. on both Friday, Nov. 9, and Saturday, Nov. 10.