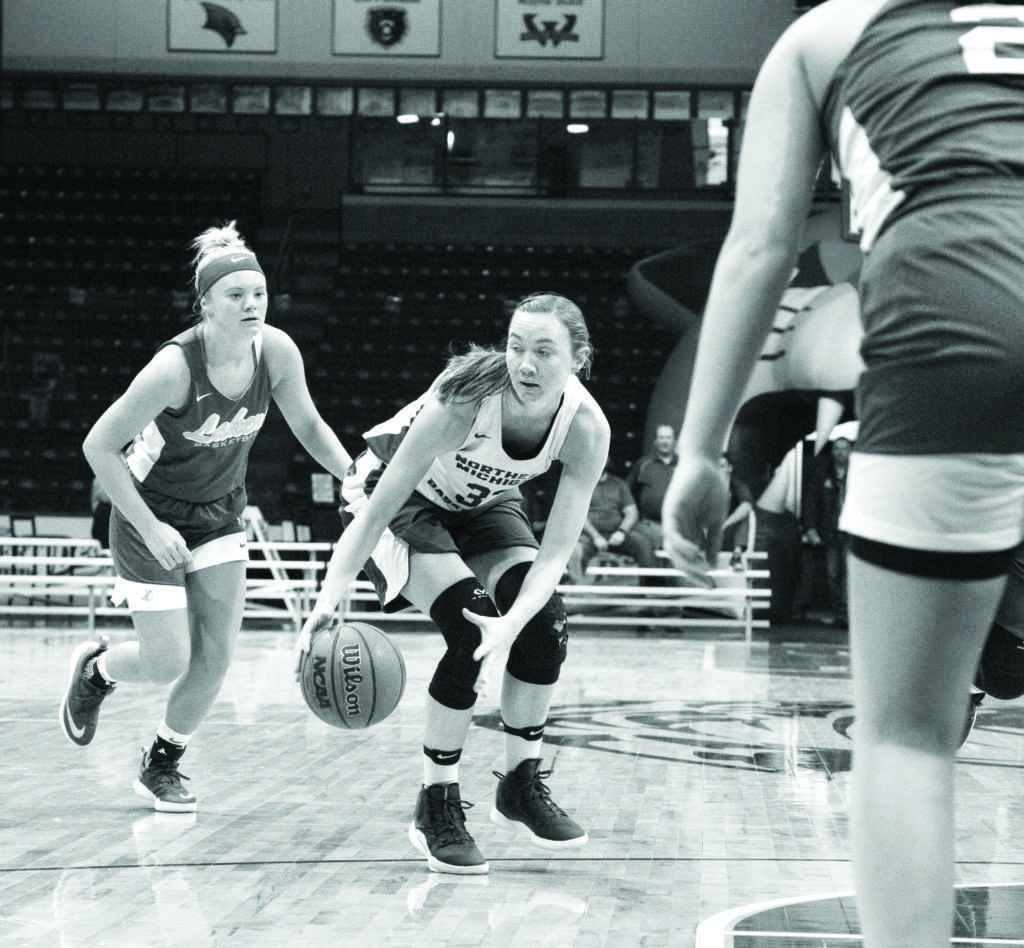 In a scrimmage against Lake Superior State University, senior guard Sydney Dillinger dribbles the ball through a fleet of Laker defenders in an attempt to make a play for the ’Cats. Photo by: Neil Flavin

The Northern Michigan University Women’s Basketball team began the year with a preseason match-up against the Finlandia University Lions. The game was not much of a contest wtih the ’Cats overpowering the Lions to the tune of 79-38.

In the 2018-2019 GLIAC preseason coaches’ poll, NMU was projected as the No. 1 team in the conference, edging out traditional powerhouse Grand Valley State University.

Despite the lofty expectations thrust upon the team, head coach Troy Mattson is well aware that things don’t always go according to script. Just a season ago, injuries ravaged the team leading to many key freshman such as guard/forward Lexi Smith.

“We are well aware of where our team was chosen,” senior guard Darby Youngstrom said. “We are concentrating on winning basketball games. Any team can be picked to finish first, but that means nothing when it comes to game time.”

NMU enters the season with valuable experience from five seniors and four juniors. The teams support for one another generates chemistry in the locker room. The strong leadership within the group has the players believing in the system.

“We really click as a team on and off the court. Every single person on our team has a role and understands what we are working towards,” Youngstrom explained.

The upperclassmens’ un-derstanding of what it takes to win will be a major advantage for the team.

“We are junior and senior-heavy and these people have been through the wars,” Mattson said.

Fortunately for the veteran-heavy lineup, young help is on the way in the form of freshman center Emily Mueller. Mueller has a big frame, standing at 6 feet, 3 inches and will make an impact on the wings down low.

Basketball was a way of life for Mueller growing up, as her mother, Emily Mueller, is a former Wisconsin Miss Basketball recipient and her father, Eric Mueller, is the all-time leading scorer at Virginia Tech University, Mattson mentioned during Tuesday’s conference.

Having a game-ready player such as Mueller already on the roster makes the line-up even deadlier, as the team looks to bring in numerous players off the bench this season.

“She’ll still come off the bench (Mueller),” Mattson said. “I’m going to try and play twelve people on Saturday. I legitimately think I can go twelve-deep right now, I feel comfortable. Obviously you don’t want to lose your one and two [best players] but I think I can play twelve who can play and help us win basketball games.”

NMU will start the regular season at noon on Saturday, Nov. 10 at the GLVC/GLIAC Challenge from Hillsdale College when they will face off against Lewis University and then against Indianapolis University at 1 p.m. on Sunday, Nov. 11.