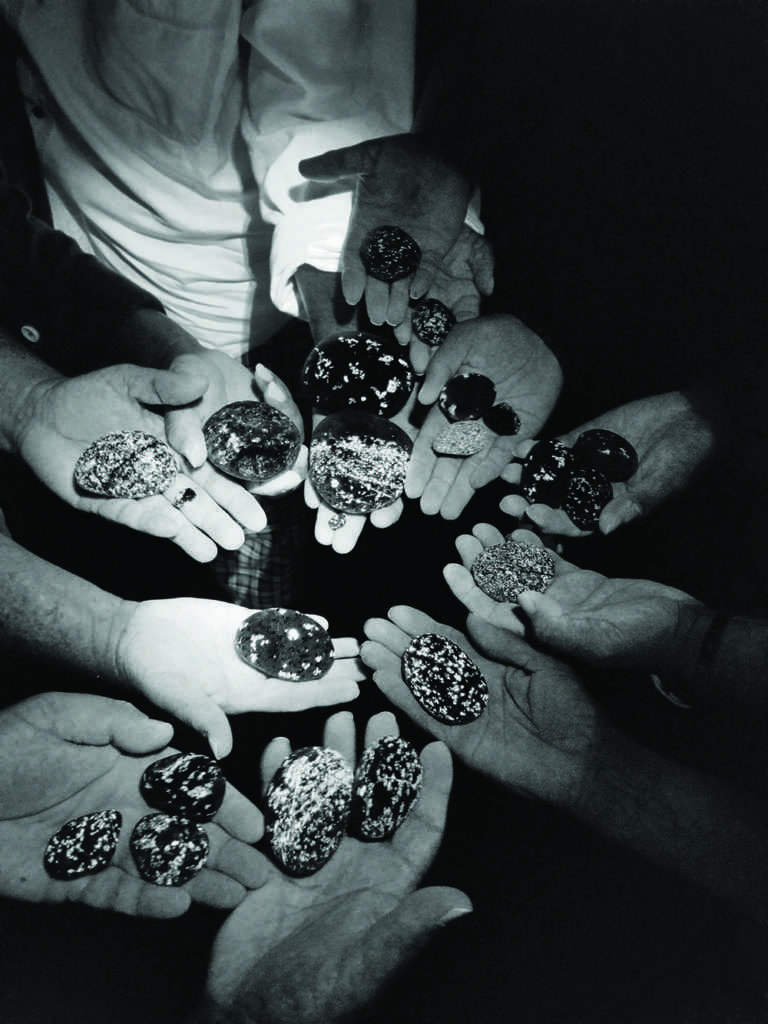 First discovered on a beach in Sault Ste. Marie in July of 2017, Erik Rintamaki coined the intrusive magmatic rock with the name “Yooperlites” after discovering the rock glows orange like molten lava through cracks in an egg, when shined with ultraviolet (UV) light. Photo courtesy of Erik Rintamaki

For the rockhound Erik Rintamaki, the U.P. has been the place to hunt rocks ever since his dad brought him to the beach, only
a few weeks old, to collect
his first rock.

Rintamaki watched the Lake Superior beaches crowd
with agate-hunting enthusiasts over the years.

“Sometimes there’s 30 other agate hunters on the beach. When you go out, you’re finding less and less of them,”
Rintamaki said.

Trying out a different technique to search for agates,
Rintamaki started shining an Ultraviolet (UV) light to see if it helped spot agates quicker at the beach. After finding zero agates with this method after three rounds of searches, Rintamaki on his fourth round, in July of 2017 at 4 a.m. at a beach in Sault Ste.

Marie, on his hands and knees spotted three “Yooperlites” in a circle, the first discovery of its kind in Michigan.

Using a UV light in the dark to shine the shore, Yooperlites light up brightly with orange lava-colored veins and spots, making them easy to locate. But to the naked eye, the rocks are a grey-blue color with white stripes.

After Rintamaki first discovered the rock, he went home and attempted an online search for “Fluorescent minerals in Michigan” to learn more. When
nothing came up in his search, Rintamaki posted pictures online and brought the rocks to shows, but still couldn’t find out anything about them, so he called them Yooperlites.

Kelley Laughlin, a geologist, stumbled upon Rintamaki pictures on Facebook and bought a Yooperlite to examine in January of 2018. Rintamaki explained to Laughlin that he believed sodalite was the fluorescent mineral in Yooperlites; so Laughlin brought in someone who could test that, Shawn Carlson, a geologist and mineralogist.

With a sample provided by Rintamaki, Carlson used
Michigan Technological University’s scanning electron
microscope (SEM), and determined that it is in fact sodalite that causes the fluorescent glow in Yooperlites.

With Carlson lab work, it was concluded that Rintamaki had discovered a new rock for Michigan. While sodalite has been found all around the world, it has never before been found in Michigan. The Yooperlite
belongs to the same family as granite—formed by the slow cooling of magma deep below the earth’s surface —they appear darker due to a higher content of certain minerals, including
pyroxenes and amphiboles.

“Yooperlites were brought down from the Canadian Shield by glaciers during the Ice Ages,” Laughlin said.

Once word got out of Rintamaki’s discovery, he started
receiving thousands of messages. Rintamaki bought an orb buffer for his Yooperlites and started making jewelry, knives and other crafts to sell online at
www.yooperlites.com.

Rintamaki now guides Yooperlite hunting tours along Lake Superior beaches, charging $50 per person. The hunting tours have now concluded for the winter season but will return in 2019 and are already filling up fast. Film crews from all around the world have visited Rintamaki, the most recent television crew, Topspin TV, from Japan.

“I’ve never had anyone not find stones,” Rintamaki said of his tour groups in a new documentary by Up North Media Company titled “Light Up
the North.”

Local Marquette agate hunter Ryan Ahearn first learned about the Yooperlite discovery in
September of 2018 and has been out hunting ever since.

“Usually I go out there for a couple hours,” Ahearn said. “There were some nights this fall where there were at least 20 people with UV flashlights at the dog beach. I’ve seen quite a few people out searching.”

Ahearn has found Yooperlites around Marquette beaches and also between Big Bay and Munising.