Lady ’Cats grind out two tough wins on the road 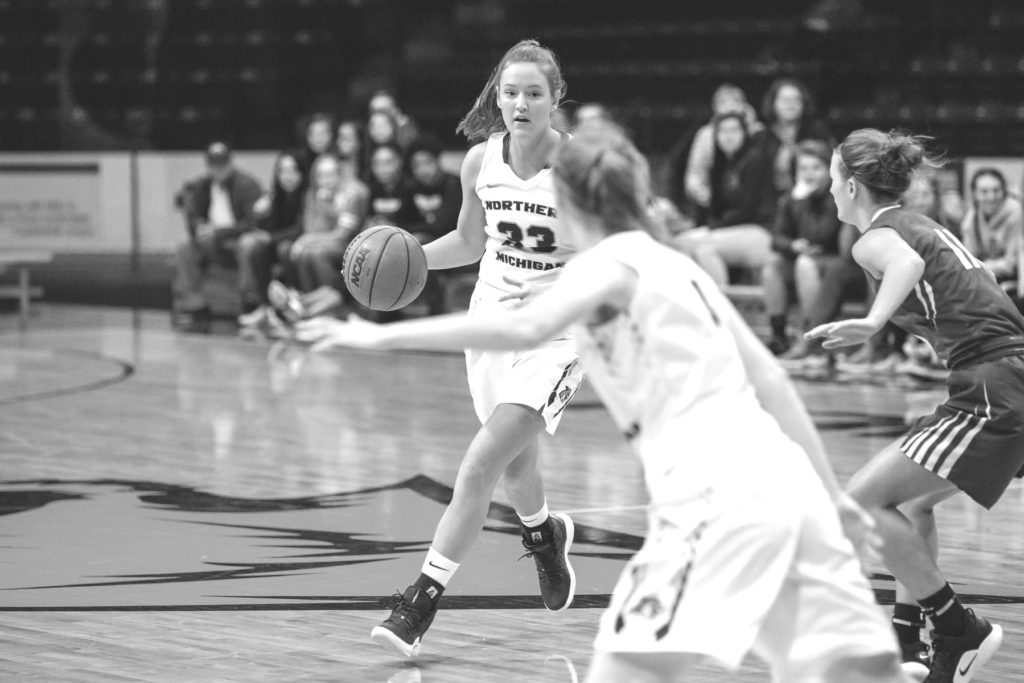 The Northern Michigan University Women’s Basketball team started the season 2-0 after a pair of victories at the GLIAC/GLVC challenge. The Wildcats took down the Lewis University (LU) Flyers 62-56 Saturday, and then Sunday, NMU beat the University of Indianapolis (UI) Greyhounds 64-61.

The 2-0 start to the season did not surprise head coach Troy Mattson.

“I think we have a really good basketball team,” Mattson said. “They were able to produce and that’s what I expect from this group.”

The Wildcat win over Lewis, the No. 25 ranked team, on Saturday was the first against a ranked opponent in five years.

“Lewis was bumping and grinding us for 94 feet and making it hard for us to get the ball up the court,” Mattson said. “I thought my point guards did an incred-ible job.”

Saturday’s game against Lewis went without a basket until the 2:30 mark. The Flyers hit a 3-pointer to end the first quarter and took a 15-14 lead over the Wildcats into the second quarter.

Lewis opened the second quarter with a 3-pointer but NMU responded with a 10-point run to take their largest lead of the game, 24-18. Lewis closed the half on a 5-0 run and the Wildcats went into halftime with a 27-25 lead.

NMU got the lead back to seven after a five-point run to start the second half. Lewis converted a 3-point play before two NMU free-throws extended the Wildcats lead to six, 37-31 with less than five minutes to play in the third quarter. NMU headed to the fourth quarter with a 42-39 lead.

The ’Cats started the final quarter with a 7-2 run, extending the lead to eight. Lewis made two free-throws but NMU responded with a pair layups to take a 57-48 lead with two minutes to go. The Flyers ended on an 8-5 run but the Wildcats held on to the lead and recorded a season-opening 62-56 victory.

In her first game since an injury cut short her junior year, senior guard Darby Youngstrom led the team with 18 points and contributed five rebounds. Senior guard Sydney Dillinger hit three 3-pointers and had 11 points to tie a career-high, and junior center Jessica Schultz chipped in with 10 points and six rebounds. Sophomore guard Lexi Smith added nine points. Off the bench, senior guard Tess Weatherly gave NMU eight points while junior forward Erin Honkala finished with a team-best seven rebounds.
Hot shooting propelled the Wildcats to a 15-5 advantage early in the first quarter in Sunday’s game against UI. With a minute left, the Greyhounds chipped away at the ’Cats lead and ended the quarter at 18-12.

UI opened the second frame with a three, but two Wildcat layups pushed the lead to 22-15. The Greyhounds scored five straight points in the final minutes of the second quarter cutting the lead to three, 30-27, but a Wildcat buzzer-beating layup sent NMU into the halftime with a 32-27 lead.

Northern opened the fourth quarter with a three-pointer but the Greyhounds responded and took a 55-52 lead. NMU regained the lead 62-60 off a 3-pointer with 1:22 to go. A Greyhound free throw cut the lead to three. With minimal time left on the clock, UI needed to foul NMU and hope for a miss on the free-throw line for a chance to win the game. The Wildcats sank both of their two free throws to and led 64-61 with just seconds remaining. A missed 3-point shot at the buzzer from the Greyhounds sent NMU home with a 64-61 victory.

UI’s Taylor Drury scored 25 points in Sunday’s contest, keeping the Greyhounds in the game and giving the Wildcats a tough contest for the second day in a row.

“I thought we got off to a really good start but they had a player that just went crazy,” Mattson said on Drury. “She made her first nine shots. My girls just hung though and executed properly down the end.”