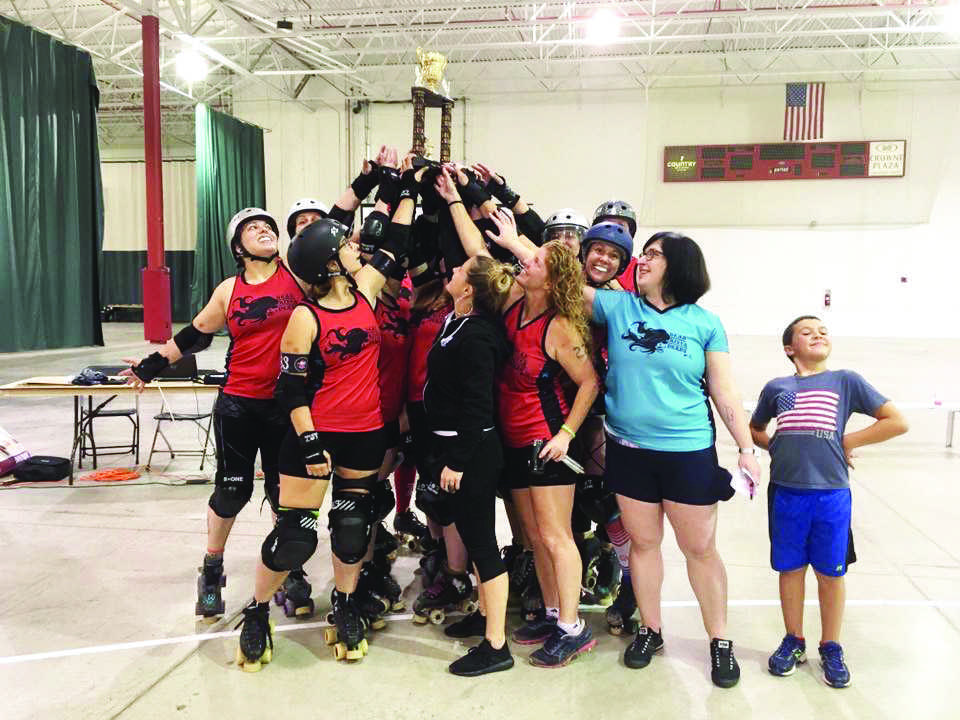 It’s the year 1935 and a Chicago man scribbles his invention on a tablecloth, conceptualizing the sport of roller derby. Over eight decades later, the sport rolled into its current fashion: women who redefine their roles in one of the world’s highest contact sports in an enthralling circular race.

In Marquette, a group of women who were interested in derby began practicing and learning the ropes. After literal blood, sweat and tears were shed, this group of women became known as Dead River Derby (DRD). Sonia Stucko, captain of the DRD team and owner of Stucko’s restaurant, is one of the founding members of the 2012-created team.

“I used to be a rink-rat kid, roller skating all the time. I walked through a corn field to get to the rink every Saturday. And now 25 years later, I moved back to Marquette and saw all these beautiful bike paths. I thought to myself, ‘I want to roller skate,’”
Stucko said.

A few years later, Stucko caught wind of women who wanted to start a team. Stucko was ready, skates in hand. The team runs by this model: for skaters, by skaters, and it operates without a coach with only a few training committee members. They
anticipate having a coach for the 2019 season.

“Because we’ve run this way so long, we have really strong skaters with strong opinions. Until they [the coach] know the game really well, it’s hard to pass the reins over,” Stucko
said.

In derby, the games are called “bouts” and they roll like this: two 14-skater teams play two 30-minute periods. Each period consists of multiple two-minute “jams,” where teams have the opportunity to score points. During a jam, each team fields four blockers, women who skate closely together in the front of the “pack” and one “jammer.” Jammers wear a large star on their helmet to differentiate themselves, much like a soccer goalie wears a different colored shirt. Once the jammer breaks free, she swings around the rink to score points. Legal actions include blocking a jammer with the hips, rear and shoulder. Players get penalized for illegal actions such as tripping, blocking the back of the pack or elbowing.

The season starts in early February and extends to October. The three months of “off season” is reserved for rest, recuperation, recruiting and training new skaters. Some members teach new skaters skills such as how to stop properly, basic pack work and basic skating. Before a skater can progress to playing, she must learn 40 skills to pass the minimum skill test. Stucko said some people take as little as three months or three years, depending on how much time and effort is exercised.

During season, the team practices for six hours a week, running drills, building endurance, discussing strategy, scrimmaging and “hitting each other a lot,” Stucko joked. Stucko organizes a season schedule a year in advance. She studies teams and their rankings to decide who would be a good matchup, statistically speaking. The team gears up all season long for the Michigan Mitten Kitten Tournament. This year’s tournament found an unlikely victor when the team defeated the Traverse City Roller Derby team by 20 points, earning them second place for the first division. Amber Kinonen, Bay College English professor and jammer for DRD, is part of the founding team and was a bit surprised of the win.

“We weren’t supposed to win. I was very nervous and knew that I had to work really hard. It came down to the last jam with only a minute left. [The opposing team] put their best jammer out and we were up by 20 points, which in derby, isn’t as much as you would think it would be,” Kinonen said. “I fought through the pack, got lead and we ended up winning by 20 points. It was the best we have ever done and it’s incredible to be a part of a jam that guaranteed our success.”
Stucko explained that DRD is composed of two teams: the A team called Rolling Riptide and the B team called Superior Sirens.

Members of the A team are a charter of the Women’s Flat Track Derby Association (WFTDA) and play competitively to move up in rankings. Newer skaters who want to play without the stresses of a competitive travel team play on the B team. Stucko explained that any skater who has passed their 40 skills is considered “cleared to bout.”

Up to 15 players come from scattered areas around the U.P. and all have different occupations from business owners, artists, medical field personnel, teachers, to real estate, Stucko said.

“I didn’t know my body can do the things I can do now. I’m almost 46 and I’m in the best shape of my life. Many of the women on our team can say that. Only two are under 40 years old. This is unusual because almost all are over 40 and one of our best jammers will be 50 this year,” Stucko said. “It really pushes you to the max, but it’s something you want to do because roller derby is highly addictive.”

The team was down to eight veteran skaters at the beginning of the 2018 season, and were unsure if they had enough people to play.

After six hours of careful and conscious re-crafting of their mission statement, they created a model that tightened the team’s laces.

“We made sure that every person was in agreement and passionate about each word. It’s a rewarding statement that we have used several times in the course of our season to help us make decisions,” Stucko said. “After we made that statement it was a matter of convincing people that left to come back and play because we were going to come together as a team more so than ever. We were able to convince a few to come back.”

Since the team evaluated their mission, they had more skaters playing than ever, Stucko said, adding, the team celebrates each other’s successes and encourage each other to achieve their goals.
“Roller derby is like a relationship: you have to learn how to work with other people that don’t think the same way as you, how to fight for what you believe in on and off the track and to support everybody’s effort even if that doesn’t align with your own goals,” she said.

That’s what being a team is all about, she said. Stucko said they have struggled
before, and it has been the hardest part
of playing.

“We have people that want to take this to the
next level and go up in rankings, and be the strongest that we can possibly be,” Stucko said. “We had people that want to wear fishnets and call themselves derby girls and that’s OK too. We have to support both types of people, because supporting each other’s goals has made us successful.”

Stucko has dedicated a lot of time, effort and emotional commitment to the team and it has been very difficult over the years. Though Stucko takes the team seriously and this is not necessarily a recreational sport for her, the past season showed what potential the team has, and she said she’s excited what coming years have to offer.

“It’s very empowering as a woman to make this time for yourself. Women are always giving our time to work, family and spouses. Very rarely do women make time for themselves,” Stucko said. “I love watching my daughter talk about how strong her mom is. There’s nothing better than watching my daughter yell ‘Go Pepper.’”
Choosing a nickname in derby is a rite of passage for every new player. It determines how bone-crushingly
Alice in Yooperland, team jammer, races ahead of the pack to score points.

intimidating they want to appear. As a restaurant owner, Stucko found inspiration from food. She said picking a derby name is a long process, and is “almost harder than picking your child’s name.”
Kinonen was a part of the first group when nicknames were not yet conceived. It wasn’t until a freeze-tag game in practice when the competitive Kinonen got her name.

“Somebody tagged me for freeze tag, and my wrist guard got caught on her shirt and removed part of her nipple. She ran to the doctor and was accused of being in an abusive relationship,” Kinonen said.
Hence, her original derby name was “Nipple Ripper.”Kinonen shortened her name to “Ripper” after some evaluation.

“I am a teacher and Cub Scout mom. I can’t be Nipple Ripper. Some names are given, and some are chosen, and mine was chosen.” she said.

Kinonen has been the board president for the past month and a half, and has many ideas to improve their success, she said, adding, the team prides itself
in giving back to other leagues and the community, including donating $350 to the Superior Youth Arts Theater in 2018.
The team offers open skating on Thursday evenings with
free equipment
rentals. The
team meets in the Baraga Gym from September through March, and at the Lakeview Arena from April through August where they hold their bouts. For more information on how
to get involved with
the DRD, visit their Facebook page
at Dead River Derby.