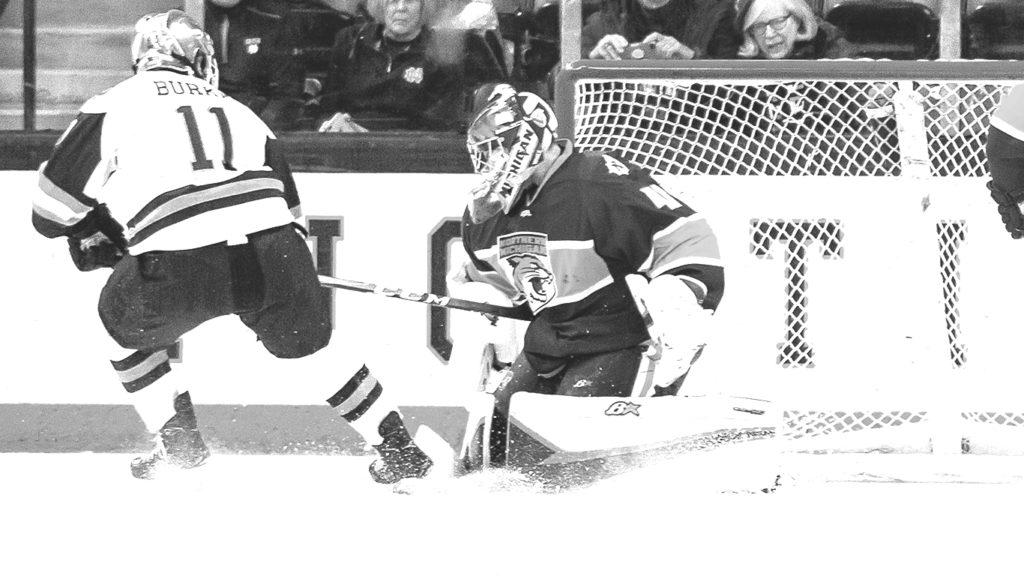 As NMU students flocked away to the comfort of their homes over Thanksgiving break, the Northern Michigan University Men’s Ice Hockey team was heating up with three matchups against ranked opponents. The Wildcats split a weekend series on the road against the Lake Superior State University (LSSU) Lakers before taking on the Notre Dame (ND) Fighting Irish just three days later.

LSSU is quietly having one of the most impressive starts to a season in all of college hockey this year, considering that the Lakers finished second-to-last in the conference and missed out on the WCHA playoffs just a season ago. The Lakers currently rank just outside of the USCHO hockey poll’s top-20 at No. 22 with two impressive wins on their resume against Michigan (5-2) and at Bowling Green (5-0).
NMU senior forward and team captain Denver Pierce rejoined the team in the first game of the LSSU series after missing a sizeable amount of time this season with an injury.

Friday night’s game against the Lakers was slow-going out of the gate with only three shots coming on net through the first 10 minutes of the game, all taken by the Wildcats.

Senior forward Troy Loggins broke the stalemate for NMU on the first shot of the second period to go up 1-0. Pierce added an assist on the goal, his second of the season.

Midway through the second period, the Lakers caught a break and scored their first goal of the game to even the game at 1 a-piece.

Then, with just 16 seconds remaining in the period, LSSU’s Gage Torrel scored to give the Lakers their first lead of the game.
The wheels began to fall off for NMU as the start of the third period commenced with LSSU scoring two goals within the first 10 minutes to build their lead to 4-1.

NMU forward Grant Loven scored his first goal in a Wildcat jersey to conclude the games scoring, with the final score 4-2 in favor of LSSU.

In need of a win to stay competitive in a tough WCHA conference, the Wildcats came out Saturday night determined to pick up a series-split. Unlike the previous match, NMU scored just 2:19 into the game when junior forward Luke Voltin scored his first goal of the season. LSSU outshot the ’Cats 10-3 in the period, however, senior goaltender Atte Tolvanen and the rest of the Wildcat defense helped keep the score 1-0 as the horn sounded the end of the first period.
The score remained the same deep into the third period until Loggins scored an empty-net goal to bring the Wildcats up 2-0.

Unfortunately for Tolvanen, who is just one shutout win away from tying the program record of 12, the Lakers scored a meaningless goal with 12 seconds left to finish the scoring at 2-1.

Saturday’s win was encouraging for NMU head coach Grant Potulny, who is still searching for reasons behind his offense’s scoring dilemma.
“On Saturday, I thought the guys really played hard,” Potulny said. “They really were dialed in and emotionally invested in the game. Our puck placement was great and our physicality was high. We’re still having a hard time generating offense, which to me has just been the most baffling thing with our team. But we found a way to win the game and at the end of the day, that’s the most important thing.”

Tolvanen finished with 59 saves between the two games against LSSU for a season total of 356, with that total leading all WCHA goaltenders while also setting him at third-most in the NCAA.

NMU finished off their final leg of three games in five days with a trip to South Bend to face off against the No. 5 ranked Irish. It was the first meeting between the old CCHA conference rivals since the dismemberment of the league after the 2012-13 season.

The ’Cats played the Irish tough in the first period with NMU only being outshot 10-7 while also blocking 10 Irish shots before they got to the net.

A mad scrum in front of Tolvanen in the net within the final minute of the first period led to the first goal of the game and a 1-0 lead for ND.

Patiently, the Wildcats waited for their opportunity for a powerplay after they were called for a pair of penalties in the second period. In the waning minutes of the period, an Irish skater was whistled for a penalty to send NMU to their first powerplay opportunity.

Junior forward Darien Craighead capitalized on a rocket one-timer shot that beat the ND goaltender over the shoulder to tie the game 1-1 with 21 seconds left in the second period.

Notre Dame looked like the German Blitzkrieg in the third period, outshooting NMU 15-3. The Wildcats stood tall like the might of a resilient Londonite while successfully killing three ND powerplay opportunities. The game would head into overtime with the score tied 1-1.

An untimely penalty from the Wildcats just 36 seconds into overtime would ultimately cost them the game.

Notre Dame scored 30 seconds later when an Irish shot was blocked away by Tolvanen but rebounded right onto the stick of ND’s Cal Burke.

The loss in overtime was the Wildcats first OT loss in two years, as the team went a perfect 7-0 last season and hadn’t played in an extra-ice session up until Tuesday’s game this season.

The Wildcats enter this weekend with a break in the schedule for a much-needed rest. Heading into next week, the ’Cats shift their gaze to Michigan Tech for a home-and-home matchup.

Game one of the series kicks off at 7 p.m. on Friday, Dec. 7, from the Berry Events Center with game two starting at the same time from Houghton on Saturday, Dec. 8.