Cozy at The Crib 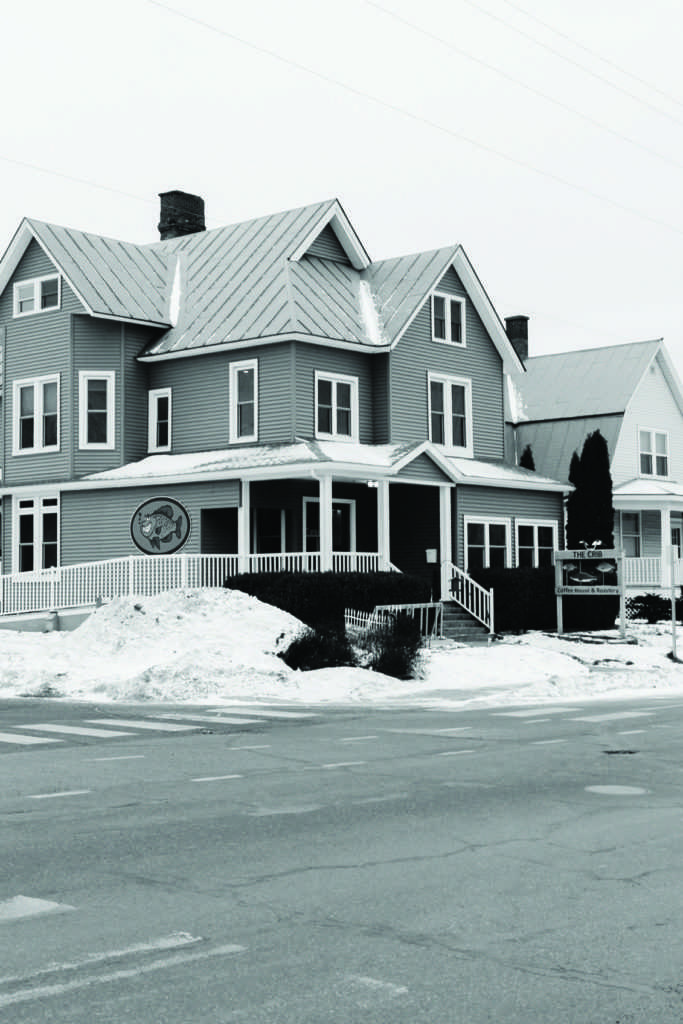 I walked up the generously salted stairs, ordered a caffeinated cortado, then sunk into one of the many plush leather couches at Marquette’s newest roastery, The Crib. Standing proud on the corner of Third and West Arch
Street, The Crib joins the two other coffee roasteries and 10 coffee shops in the area.

The multidimensional, powder-blue Victorian house is home to Crappie Coffee roastery, which the owners and married couple
Nicole Alexander and David Grant started in 2016. When it comes to being a part of the
Marquette coffee scene, General Manager Emily Wegemer spoke for the owners and herself that they are excited to work
with other coffee shops in town.

“Marquette can support a large number of coffee shops. With the university, hospital, young professionals and people looking for communal spaces,
I think everyone is finding
their own place,” Wegemer said. “We’re very friendly toward other shops in town and have good relationships with them.”

With the support from friends and the community, The
Crib came into it’s now rustic, spacious feel from the bones of its Victorian past. Wegemer said it was a process recognizing what the house could be,
what the bones were like and how to structure around that.

“It ended up being a really big renovation project. We essentially restored it back
to its original structure and in that process found some really gorgeous details, like real
maple floors, and flower-engraved original trim,” Wegemer said. “It’s been pretty pricey but the owners are excited about investing in
the community and the space. They care a lot about the Marquette community.”

The Crib’s niche is one of hominess and comfort, Wegemer said.

“All of us have spent a lot of hours in coffee shops during school and wanted a space here that felt welcoming, comfy
and homey,” Wegemer said.

“We were keen on finding leather chairs and places that you’d want to sit a while with a laptop or a good friend. Whether as a study space or a social space,
we were aiming for comfort.”

The omnipresent fish theme
is an inside joke between owners Alexander and avid fisherman Grant. Alexander would tease Grant and ask if he was
“a crappy fisherman,” referring to the fish breed Crappie, Wegemer said. When the couple found an old home for their shop, the idea of having Crappie Coffee roasting in a habitat structure made sense. Wegemer said the crib is in reference to
a fishing habitat structure. Thus, The Crib is the structure for Crappie Coffee roasting.

After some experimentation
at the original roastery warehouse in Marquette, the owners created a few staple brews that were to their liking, such as the dark roast “Sinker.” The coffee beans are sourced globally from Central, South American and African countries, Wegemer said. Since 2016, Crappie Coffee has been selling wholesale coffee beans
around town in shops like Econo Foods, the Marquette Food
Co-op and the Spice
Merchants shop.

“We’re excited about listening to the needs of the community. The room that we’re sitting in right now [the upstairs conference room on the left]
is something that the community expressed interest in to have
a space to hold conferences
and meetings,” Wegemer said.

Elliot Boettcher, NMU
grad and employee, has been apart of The Crib crew since day one, playing ping pong in the original roastey.

“People are really seeming to enjoy the coffee and the relaxing atmosphere,” Boettcher
said. “We’ve had a good week and a half so far and have had
a pretty good turnout.”

Their current hours are
7 a.m. to 7 p.m, but will extend their hours until 10 p.m. in light of finals week for
NMU students. They will also offer a 20 percent off
discount on coffee and all cupcakes will be half
price during this time.