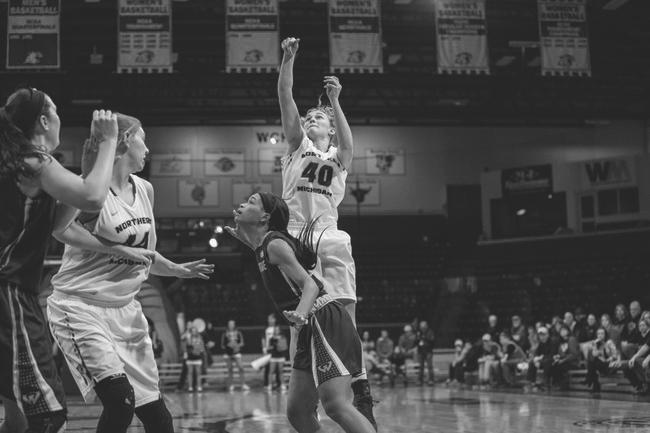 The Northern Michigan University Women’s Basketball team opened their GLIAC play this past weekend with match-ups against the Northwood University (NU) Timberwolves and the Saginaw Valley State University (SVSU) Cardinals. The Wildcats took down the Timberwolves on Thursday, Nov. 29, with a 51-39 win, propelled by a strong performance from junior center Jessica Schultz. NMU completed the weekend sweep on Saturday, Dec. 1, with a convincing 66-52 victory over Saginaw Valley backed by an excellent second quarter.

Despite recording two wins over the weekend the team is always looking to improve.

“You are always happy when you win,” explained head coach Troy Mattson. “But what you need to do is take a good look at your team and see if you’re playing to your highest potential.”
Schultz led the Wildcats with a season-high of 20 points. Schultz also contributed four blocks and six rebounds in Thursday’s win against Northwood University.

“Jess is a great facilitator for us,” senior guard Darby Youngstrom said. “We kind of run the offense through her.”

The Timberwolves took a 6-0 advantage early in Thursday’s game. The ’Cats battled back and Schultz scored six points in the final 4:24 minutes of the opening quarter to give the Wildcats a 14-11 lead heading into the second frame.
In the second quarter, NMU held NU to just five points. Schultz hit a 3-pointer to make the score 17-11. Northern took a 23-16 lead into halftime.

After a Northwood 3-pointer to open the third quarter, Schultz fueled a Wildcat 10-2 run, scoring six of the teams ten points.

The Timberwolves cut the deficit to 10, sending the game into the final frame with NMU on top 35-25.

The teams traded 3-pointers to open the fourth quarter. A Schultz 3-point play made it a 41-30 game. NU closed the gap with a three, making the score 46-35. Northwood scored with 40 seconds on the clock, but Schultz sealed the win with two free throws to give the Wildcats the 51-39 victory.

The Wildcats held Northwood to just 26 percent shooting from the field and 20.6 percent from the 3-point arc. Over the course of the game NMU allowed NU to shoot just two free throws.

In Saturday’s match-up against Saginaw Valley, NMU dominated the gritty areas on the court. In the paint, the Wildcats outscored SVSU 36-6 and won the rebound battle 51-23.

“We really take [tough play] to heart,” Youngstrom said. “Our team is not satisfied, when we watch film we are always looking at the opportunities we missed.”

The teams traded baskets to start the game making the score 6-6 at the 6:38 mark. The Wildcats took a late 15-13 lead. A Northern basket and a Cardinals 3-pointer sent the game into the second quarter with NMU leading 17-16.

The Wildcats continued their dominance into the second half starting with a 9-0 run, extending the lead to 43-17 midway through the third quarter. From the start of the second quarter until the 5:46 mark of the third frame, NMU outscored SVSU 26-1. The hosts cut the ’Cats lead to 18 as Northern took a 50-32 lead into the final quarter.

SVSU scored five points to open the fourth quarter. The Wildcats responded with seven straight points, pushing their lead to 20. The lead was too large for the struggling Cardinal offense to overcome and NMU captured the 66-52 victory.

The Wildcats improved to 7-2 on the season and are 2-0 in the GLIAC. The ’Cats return to the Berry Events Center to take on Purdue University Northwest at 5:30 p.m. on Thursday, Dec. 6, and welcome the University of Wisconsin-Parkside at 1 p.m. on Saturday Dec. 8.