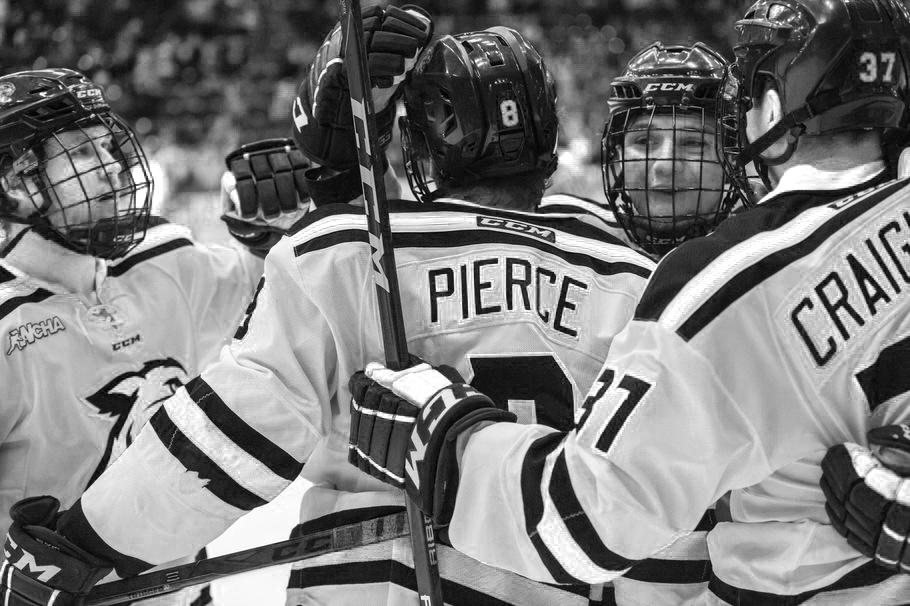 Things change in the blink of an eye. That was exactly the case for the Northern Michigan University Men’s Ice Hockey team last weekend, taking a 5-1 decision at Alaska-Anchorage in Friday’s series opener before staging its second third-period comeback in as many weeks to defeat the Seawolves 4-1 on Saturday.

The Wildcats finished their two-week long Alaskan adventure with a 4-0 record, putting NMU over the .500 mark for the first time this season.

NMU is now 13-10-0 on the season, with a 12-4-0 record in WCHA play. The Wildcats now sit in second place in the league standings with 36 points, three points or one game behind its next opponent, Minnesota State-Mankato.

“I didn’t think we played very well on Friday,” Potulny said. “The score wouldn’t indicate that but we just made plays when we had an opportunity but we didn’t play great. I thought Saturday was a really good effort, we just didn’t score early. We stuck with it and finished with a hard sweep. It’s not easy to go up there and stay fresh all week and be able to be mentally [tough] enough to come through that so I was proud of the guys.”

Friday’s 5-1 victory was in part due to the contributions of sophomore forward Joseph Nardi and freshman forward Griffin Loughran.

Nardi scored two goals i Friday’s game, the first coming 1:41 into the contest on an assist from Loughran, with his second midway through the third period to increase the lead to 4-1, also assisted on by Loughran and fellow freshman forward Ty
Readman.

Senior captain and forward Denver Pierce notched the game-winning goal on Friday, scoring the second goal of the game with 29 seconds to play in the first period. Pierce received assists from senior forward Troy Loggins and junior defenseman Philip
Beaulieu.

Nardi, Loughran, Beaulieu and Loggins all finished with two points in Friday’s decision while senior goaltender Atte Tolvanen made 20 saves.

Looking to rebound on Saturday, the Seawolves gained a 1-0 lead at the 10:33 mark of the first period when freshman defenseman Andrew Lane notched his first collegiate goal, backhanding a shot by Tolvanen and
into the net.

The Wildcats were unable to get anything going after that goal until the third period when NMU scored three consecutive goals in a span of 1:17.

The first goal came with 7:10 left to play, when freshman forward Jarrett Lee found the back of the net on a rebound off of a shot from sophomore defenseman Robert Fosdick, finally cracking Seawolves sophomore netminder Kris Carlson. Senior defenseman Tony Bretzman also assisted.

Nardi put a partial-breakaway wrist shot 46 seconds later, passed Carlson for a sudden 2-1 Wildcats lead and his third goal of the weekend.

Senior forward Adam Rockwood took a pass from Loggins 31 seconds after that and found the back of the net. Pierce also assisted.
NMU managed to easily hold the lead the rest of the way, as the Seawolves seemingly had their legs taken out from under them after the scoring surge.

Loggins added an empty-net goal with 2:01 to play to seal the victory, weekend sweep and Alaskan sweep.

Potulny said when you fall into an early hole, it can be a challenge to climb back and win. His Wildcats managed to do it for two Saturdays in a row, however, with Beaulieu scoring a third-period hat-trick against Alaska-Fairbanks one week prior earning a similar comeback win.

“The ability to stay with a game like that is challenging,” Potulny said. “What happens a lot of the time is you get out of your structure, start to press and you give up odd-man rushes because you’re pressing too much. It’s a hard thing to do in hockey so to be able to do it two weekends in a row is good to see.”

Loughran’s three-point weekend earned him WCHA Rookie of the Week honors, as he has now scored scored eight points in the last five games.

NMU has a bye weekend to regroup from the two-week Alaskan journey, before returning home for the first time since Dec. 15 to host WCHA-leading Minnesota State-Mankato on
Jan. 25-26.