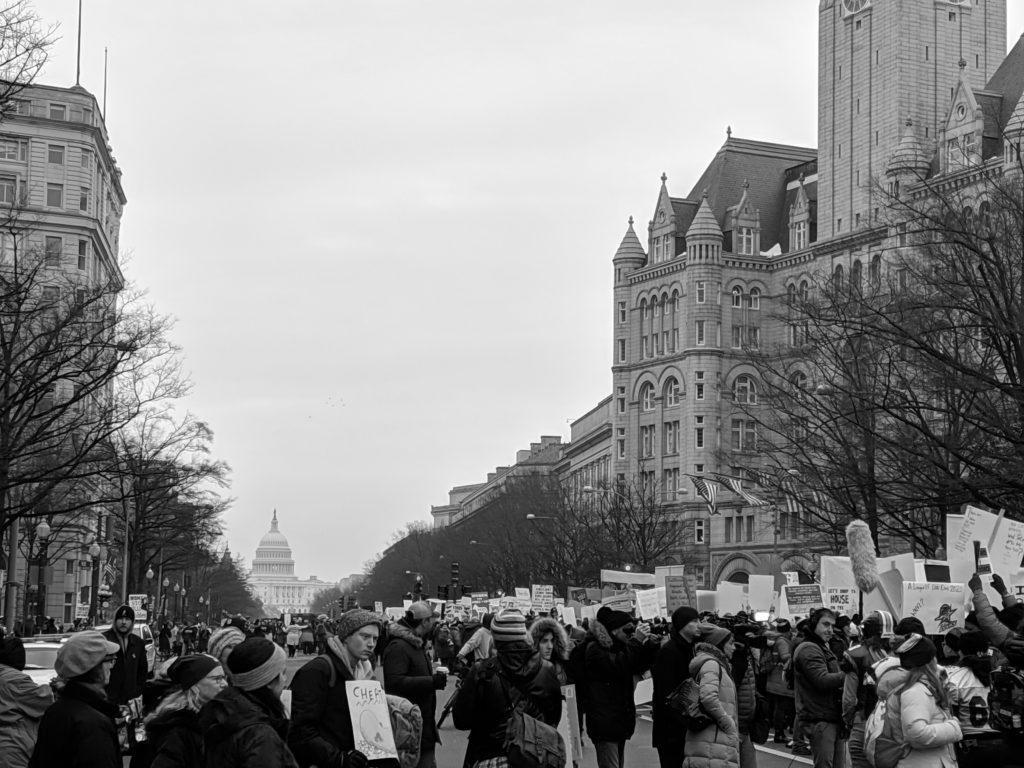 Trash cans overflowed with discarded signs from the previous day’s March for Life events, the National Guard parked barrier vehicles and the U.S. Capitol watched silently over Pennsylvania Avenue from behind a blanket of fog as we stepped off the bus Saturday
morning.

Moving down the sidewalk toward Freedom Plaza, my partner Amelia and I met more hawkers peddling T-shirts and buttons than marchers, but as the morning progressed and the fog lifted, the marble plaza filled with throngs of women holding signs that read “Women’s Wave 2020” and “The Future is Female.”

“They weren’t ready for it,” Amelia said of the Women’s March on Washington she attended in 2017. “It was beautiful and so overwhelming.”

This year she was joined by me, a tag-along journalist already covered in goosebumps, and although this year’s march had started, we weren’t moving. Drummers from an Indigenous women group were setting a pace for stationary bodies and the anxiety of adding literal motion to a 170-year-old movement was building.

As we finally broke forward, passing Trump International Hotel barricaded with mobile fences and police officers, the anxiety changed into action. Marchers shouted insults and stepped out of the pack to take photos of their middle fingers pointing at the building.

“Just look at their faces,” Amelia said of the all-male line of police officers. “How can they not react to this?”

Some smiled in our direction, others stared straight ahead, expressionless.

We turned off 11th Street onto E Street led by chants of “My body, my choice,” belted out in response to the counter protest claims of pro-life groups stationed on the sidewalk. They had the same right to demonstrate as we did. No one interacted through violence, but we later witnessed someone spit in the space of one of the pro-life protesters.

The echo of these voices gave me chills and the realization that although the women’s movement had recently produced change in Congress, it would have to continue challenging the pillars of patriarchy and power, brought me to tears more than once.

Manifestations of identity and intersectionality surrounded us the whole march. Jewish women of color marched next to white women, Muslim women held the same signs as trans women and older women chanted in rhythm with younger women.

The women we talked with said they marched for many reasons, but they all shared the same mission of empowerment, and their energy was potent.

“2017 had power in numbers, but this march has power in voices and diversity,” Amelia said. “When people see powerful, angry women in the streets, it tells them everywhere that something is going on, that they need to listen.”