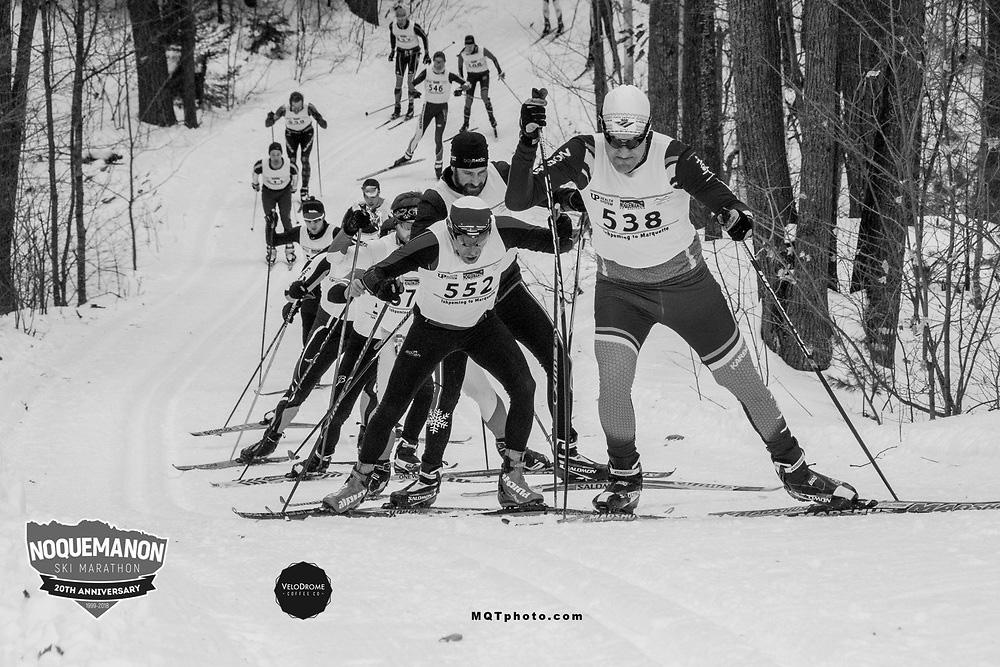 Cross-country skiers forge up a steep slope at last years Noquemanon Ski Marathon. This three-day event attracts over 1,500 cross-country skiers each year and is one of the top three largest in the nation. Photo courtesy of Andy Gregg at MQT Photo

Perfect U.P. snow conditions will draw in athletes from across the nation who will ski into the 21st annual Noquemanon Ski Marathon this weekend. This three-day race attracts over 1,500 cross country skiers each year and is one of the top three largest ski marathons in the nation, Jason Rolling, director of the Noquemanon Ski Marathon said. The funds raised from the ski marathon will pool toward the Noquemanon Trail Network (NTN), which is a nonprofit organization that builds and maintains trails for hiking, biking, running, cross country skiing and snowshoeing.

“The conditions are pretty amazing this year,” Rolling said. “Most of the Midwest has been struggling with snow, we haven’t had that problem, it’s probably one of the best race courses we’ve ever had.”

On average, this event attracts 1,500 to 1,700 of some of the best cross country skiing athletes from across the nation, he said.

Rolling, an NMU alumnus and skier for the Olympic Training Site, is the second person to be the director of the race after the former director created it more than two decades ago.

The marathon, traversing on the Noquemanon trails, begins in Ishpeming and ends in Marquette, making it a point-to-point race with true marathon distances.

“A couple years ago we had a bad snow year and we had to focus on a lot more trails in Forestville,” Rolling said. “We thought that was going to be a bummer, but it turns out that people digged it and wanted to keep it going. What we’ve done now is we incorporated Forestville trails into the marathon to add some more challenge and diversity to the race course.”

The weekend begins with junior Noque races, which are shorter races for children with waves for ages under 7 up to 19 on Friday, Jan. 24. On Saturday, Jan. 25, there are men and women’s skate and classical races with distances of 50k Marathon, 24k Half Noque, Noque 12k and a 15-mile snowshoe race. Lastly, Sunday, Jan. 26 is “the wild side of the Noque,” Rolling said, with the Animoosh Skijor 10k, a race where harnessed, trained dogs pulls the skier. Sunday will also host a 20k snow bike race and 5k and 10k snowshoe races.

Although it is technically a classical race, meaning prize money will only be awarded to those who choose to classic ski, Rolling said that there is a good mix of classic and skate skiers participating in the event.

This event is not only beneficial to the NTN but the Marquette community as a whole, Rolling said. This event brings in about 5,000 to 7,000 people who stay in the community for the weekend and stay in hotels and visit restaurants and shops.

“The trails entice people to move here because they want that lifestyle, I think that overall this has a lot to do with Marquette as a whole,” Rolling said. “It makes it cool, you know?”

This race would not happen without participation from other businesses and people in the community, Rolling said. Over 600 volunteers and hundreds of businesses donate their time, product or money, he added.

“It takes an entire village,” Rolling said. “There is a lot of community support and we are so thankful for that.”

NMU is also involved in this event, Rolling noted. NMU athletic training and nursing students help out and dozens of other organizations donate volunteers, and NMU’s contribution has been instrumental for this event, he said.

There are so many small details of pieces that need to come together to make this event possible and Rolling said he most looks forward to the time when everyone has crossed the finish line and left the course feeling happy and healthy.

“That fulfillment of being completely exhausted but knowing that you put everything into it and making sure that people get what they paid for and they came here to enjoy an event and they can do that,” he said. “To me, that’s a big deal.”