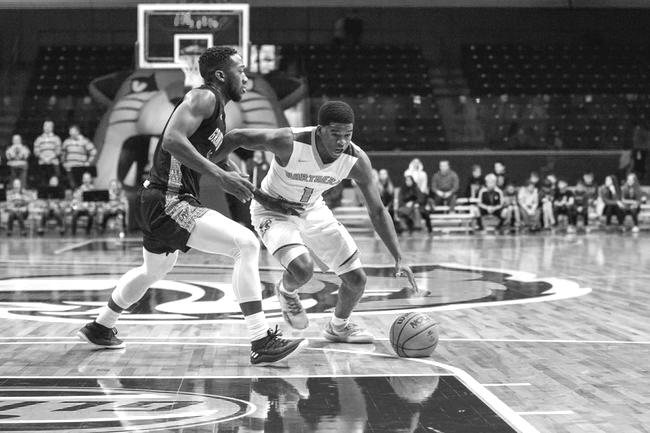 “We’re getting back on the right track,” head coach Bill Sall said. “Energy and defense were the two things we needed to come out with and I was particularly happy with the way we played.”

By earning two wins at the season’s halfway mark, senior guard Naba Echols said the victories can either make or break their season.

“We’ve seen how quickly things can turn on us, like that losing streak we had, and it taught us a very valuable lesson,” Echols said.

Last Thursday, a layup by redshirt-freshman forward/center Troy Summers and a three by junior center Myles Howard brought NMU up to a 9-2 lead in the first half. The Wildcats defense held the DU offense in check as they pulled out to a 20-9 lead after another layup by Summers. The Panthers salvaged a steady run, but a free throw from senior guard/forward Isaiah Johnson helped NMU take a 31-18 lead into halftime.

DU came out hot in the second half as the Panthers took a 39-38 lead, but a three by junior guard Marcus Matelski put NMU on top 41-39. The Wildcats defense wouldn’t let DU get any closer than 10 points as a late steal and dunk by sophomore guard Alec Fruin would help NMU snap their losing slide with a 77-63 win.

GVSU started Saturday’s game with a 5-0 run, but NMU took a 7-5 lead due to shots from Echols, Summers and Johnson. The game remained close in the first half until a layup by Summers stretched the Wildcats lead to 20-12. The Wildcats continued their offensive attack as threes from Fruin and Echols helped secure a 42-31 lead into halftime.

NMU’s cold shooting at the start of the second half helped the Lakers trim their trail to four points. After a dunk from GVSU’s Jake Van Tubbergen, Echols scored four straight points to make it 46-40 NMU with 14:20 remaining. With five minutes remaining, the Wildcats pulled away after Howard’s free throw and a Taylor three made it 58-47 NMU. The Wildcat defense would hold GVSU to nine points late as they cruised to a 70-61 victory.

Echols led in scoring with a game-high of 26 points, with Johnson adding 18 points. Both players also finished perfect from the free-throw line, going 6-for-6.

Echols’s efforts lauded him GLIAC Player of the Week for the second time this season. He’s happy about earning the award, but feels it should’ve went to a teammate more deserving.

“I wish, somehow as a team, we vote for ‘Player of the Week’ to go to [Myles Howard],” Echols said. “For putting the work in every week and helping us out on the court, he doesn’t get enough credit.”

The Wildcats are now in fourth place in the GLIAC North and the two recent wins should provide a boost as they host their archrivals, the Michigan Tech University Huskies on Saturday Jan. 26 at 1 p.m. to wrap up their homestand.

With the team home for the rivalry game and a “White Out” scheduled, Echols said the home-court crowd should help the team.

“As a player, it feels like the energy and excitement around the [Berry] is different than the past because we have been winning,” Echols said. “You can tell the energy from the crowd and it helps us out a lot.”

Sall said this game is important for both the GLIAC standings and the rivalry standpoint.

“There are certain games that you have circled red on your calendar and this is one of them,” Sall said.