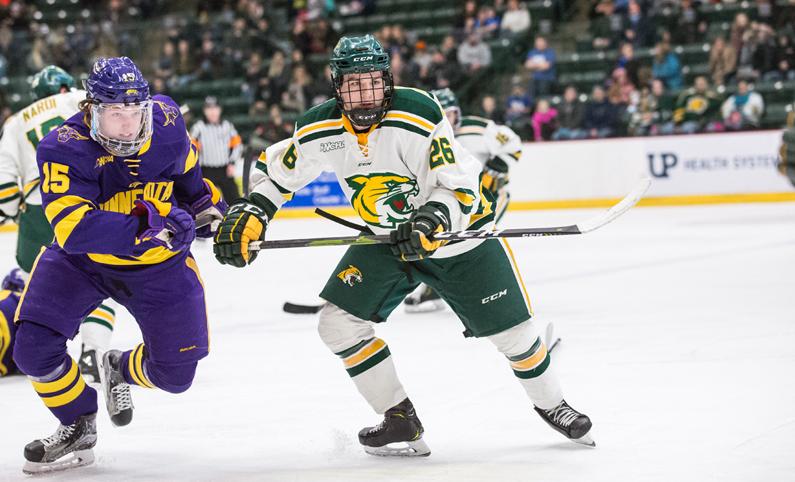 Freshman forward Ty Readman chases down a puck while trying to hold back a Minnesota State Maverick. Photo courtesy of NMU Athletics

NMU’s six-game winning streak was snapped at the hands of then-No. 7 Minnesota State-Mankato (MSU) in a close 3-2 loss before the Mavericks earned the sweep on Saturday in an 8-2 drubbing of the Wildcats.

Lake Superior State follows the Wildcats and Huskies with 35 points while Bemidji State trails them with 34 in a narrow race for playoff seeding in the stretch run of the season.

It’s not exactly the spot NMU head coach Grant Potulny wanted his team to be in, a tight home-ice playoff hunt with three other teams when they could have been in first place at the end of the weekend.

Saturday, in particular, was the Wildcats’ worst game of the season following the six-goal loss.

“You can’t do that. That changes the complexion of the game when you’re playing from the front of chasing the game. For whatever reason this year, we haven’t been able to start well at home. That’s been the bread and butter of our program is that we come out of the gates swinging. I didn’t think we did that either night.”

In Friday’s contest, the Mavericks jumped out to a 3-0 lead early in the third period. NMU finally received goals from senior forward Troy Loggins and freshman forward Griffin Loughran, but it was too little, too late as Mankato fended off a furious NMU rally to hold on for the win.

Despite outshooting MSU again Saturday 24-22, the Mavericks scored just 1:07 into the game on a goal from Julian Napravnik which was the first shot Tolvanen faced.

It was all downhill from there, with the Mavericks scoring two more to make it 3-0 before Tolvanen was pulled for freshman goaltender Nolan Kent.

Tolvanen did come back at the start of the second and played the rest of the game, letting in four more goals while Kent let in one.

NMU’s two goals came from junior defenseman Philip Beaulieu at 11:40 of the first, beating McKay on a shot from the blue line while freshman forward Grant Loven notched his fourth of the year in the second period.

The Wildcats continue the homestand this weekend, welcoming No. 13 Bowling Green (BGSU) to the Berry Events Center for a weekend series. The Wildcats and Falcons split the weekend back on Nov. 2 and 3, with BGSU earning a 3-1 win on Friday before NMU rebounded for a 2-0 win Saturday at the Slater Family Ice Arena.

The last time the two teams met in Marquette was during the second round of the WCHA playoffs last season when the Wildcats won the best-of-three series in game three on a Loggins overtime slap shot to send NMU to the league championship game.

Potulny said he knows the importance of the league standings going into this weekend and will do his best to get his players locked in.

“Had we split the weekend, we’d be even-steven with them. Had we swept them, we’re kind of in the driver’s seat,” Potulny said. “None of those things happened. Now we have to focus on finishing where we finished last year. We all know the importance of finishing second. It keeps you home for the first two rounds and you have a chance to host the championship game.

“It’s not just Northern Michigan and Bowling Green. Lake State’s there, Tech is there, all of a sudden Bemidji is there. Those are all of our opponents in the next six weeks. We’ve got to make sure every weekend we’re as dialed in as we can be. It’s not like there’s a separation from the top of the league to the middle of the league. We’re all kind of bunched up right there.”

Puck drop versus Bowling Green is set for 7:07 p.m. on both Friday and Saturday.