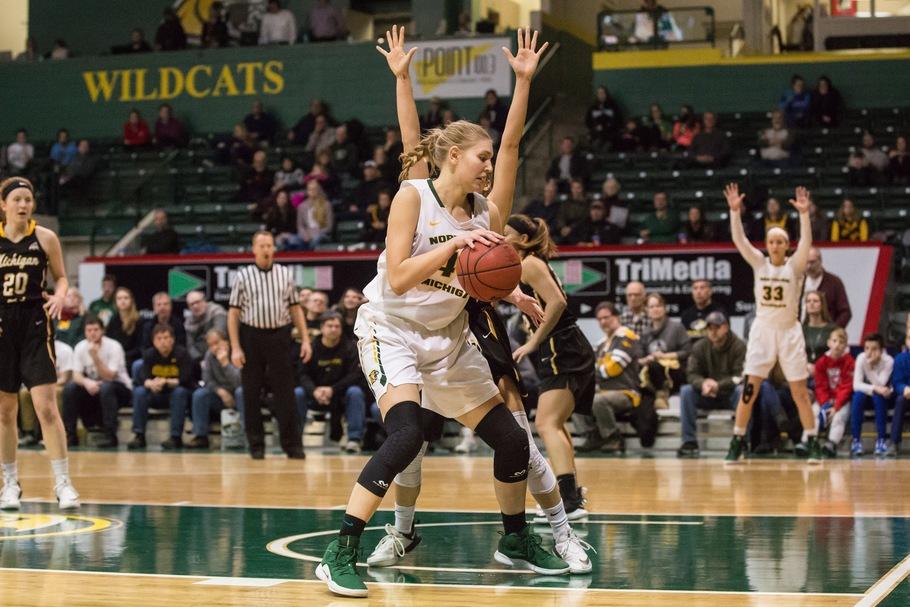 The Northern Michigan Women’s Basketball team hosted U.P. rival the Michigan Technological University (MTU) Huskies this past Saturday. Despite a late comeback attempt, the Wildcats fell short in a 55-53 defeat.

The Wildcats failed to convert on nine layups and seven free throws.

“We played hard but we have tendencies at times to not finish plays,” head coach Troy Mattson said. “[Michigan Tech] made some shots and we didn’t.”

Michigan Tech started the game strong and halfway through the first quarter, NMU trailed 11-3. With 2:22 remaining in the opening frame the Wildcats cut the MTU lead to 11-8. The Huskies outscored the ’Cats 5-1 to send the game into the second quarter with NMU behind 16-9.

NMU opened the second half with four unanswered points making it a 34-25 game. Tech went on an 8-2 run increasing their lead to 42-27 with a minute to play in the quarter. The Wildcats entered the final frame down 42-28.

The Huskies started the fourth quarter by extending their lead to 46-28. With five minutes left in the game, the Wildcats cut the deficit to 46-39 fueled by an 11-point run. With 2:12 on the clock, the score was 48-43. The teams traded baskets and with 41 seconds to play it was a 50-45 game in favor of MTU. After a 3-pointer, NMU made it a one-point game, 54-53 with 14 seconds to play. Tech added a free throw with two seconds to go. The Wildcats put up a last-second shot attempt to tie the game but failed to convert as Michigan Tech claimed a 55-53 win.

Despite staying in first place after the loss, NMU players were visibly frustrated with Saturday’s result.

“They were disappointed we got beat. I expect us to bounce back,” Mattson said.

The Wildcats travel for a pair of road contents, first up playing the University of Wisconsin-Parkside at 7 p.m. on Thursday, Jan. 31, then continue to visit Purdue-Northwest for a 4 p.m. tipoff on Saturday, Feb. 2. The players and coaches know this game will not be as lopsided as the 72-39 NMU victory back in December.

“I’ve been worried about this game and it will be a real challenge for us, Mattson said. “I told my team yesterday that the score last time is not Indicative of who Parkside really is.”