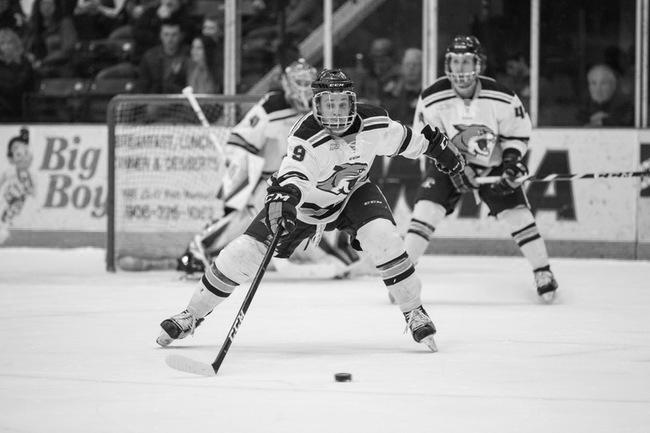 The Wildcats suffered a heartbreaker on Friday, surrendering a late lead and falling 3-2 to the Falcons 17 seconds into overtime.

NMU picked up a 3-2 victory of its own Saturday with the help of three first period goals from freshman forward Grant Loven and junior forwards Luke Voltin and Darien Craighead.

In Friday’s contest, sophomore defenseman Adam Roeder scored the first Wildcats goal in the second period, with Voltin and senior defenseman Tony Bretzman assisting. Roeder’s tally evened the score at 1-1 at the time.

The Wildcats went up 2-1 at the 2:30 mark of the third period on a power play slap shot from senior forward Troy Loggins. The Wildcats held that lead for nearly 14 minutes before BGSU’s Connor Ford found the back of the net at 15:04 to even things up and force overtime.

The Falcons won the opening faceoff of overtime, and John Schilling quickly walked in on NMU senior netminder Atte Tolvanen, slipping the puck by him for the quick game-winner with Ford assisting on the overtime goal.

Shots on goal were 24-23 in favor of the Falcons, with Tolvanen stopping 21 while BGSU goaltender Ryan Bednard turned away 21 shots.

The Falcons outshot the Wildcats again Saturday, this time by a 28-23 margin, but the NMU defense locked things down after BGSU made it a one-goal game late with another Schilling goal with 23 seconds left.

NMU now sits 14-13-0 overall and 13-7-0 in WCHA play. The Wildcats will travel to Huntsville, Alabama, this weekend to face the University of Alabama-Huntsville (UAH) Chargers for the first time this season.

With just four weeks left in the season, the Chargers have been a thorn in NMU’s side over the last few seasons. Over the past two seasons, the Wildcats have just a 4-5-0 record against UAH, including playoffs. It’s the first time the team’s will meet since last season’s WCHA first-round playoff series, where the Chargers were able to force a decisive game three at the Berry Events Center before the Wildcats took the series with a 5-2 victory.

Not only could this be considered a trap series for the Wildcats, but there’s also a log jam atop the WCHA standings.

NMU currently sits in fourth place with 39 points, the final position in the race for home ice during the playoffs. Michigan Tech sits right behind NMU with 36 points while Bemidji is in sixth with 34.

Ahead of the Wildcats are Lake Superior State with 41 points, BGSU with 43 and first-place Minnesota State-Mankato who are in cruise control with 54 points.

Puck drop from the Von Braun Center in Huntsville is set for 7:07 p.m. on Friday with a 4:37 p.m. matchup preceding on Saturday.