Middle of the pack ’Cats looking for playoff push 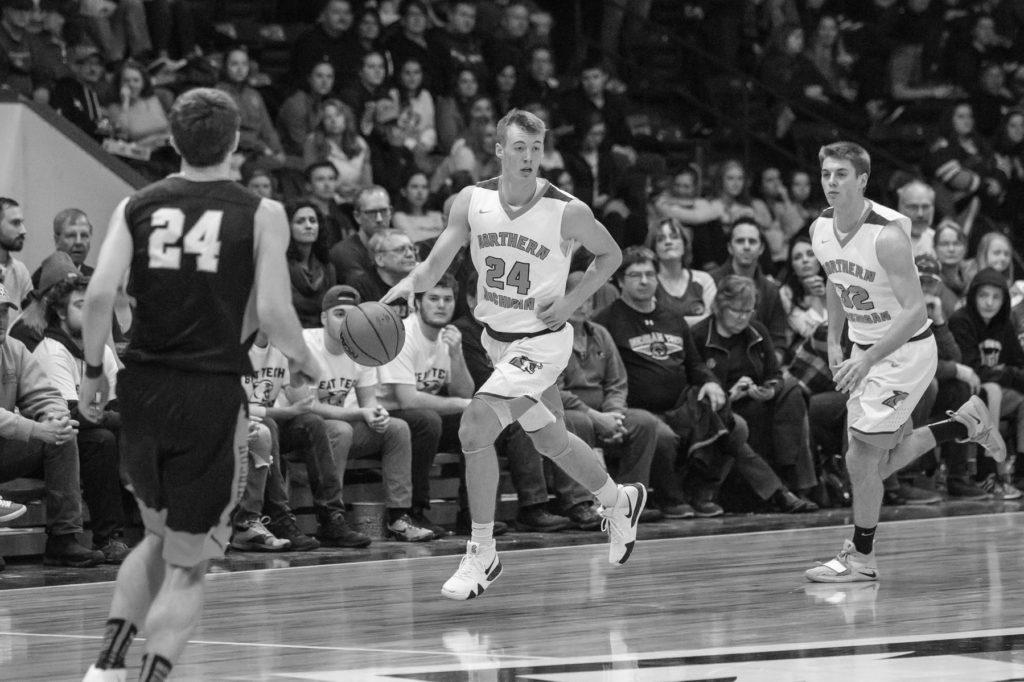 As the GLIAC playoff race heats up, the Northern Michigan University Men’s Basketball team battled to a road split as they lost to the University of Wisconsin-Parkside Rangers in overtime 71-65, but rebounded to defeat the Purdue Northwest University (PNW) Pride 86-74 over the weekend in a GLIAC matchup.

“It’s been huge to see the development of those players. Especially with having Troy as a low-post [scoring] threat and Alec as a scorer and a defender which he’d never been,” Sall said. “As a team, we played incredibly well, we just missed some scoring opportunities and it cost us.”

Senior center Max Prendergast said the team played hard, but felt from the Parkside game that they should’ve won.

“I thought we defended well, especially with holding them to their season average [in points], but they scored six points on us early and we just couldn’t get back,” Prendergast said.

NMU started off Thursday’s game leading 8-2 after a three by senior guard Naba Echols. However, the Rangers answered back and took a 25-22 lead after a Jonathan Morrobel three. The game stayed neck-and-neck throughout the rest of the first half, but a Wildcat eight-point run confirmed a 30-28 lead at halftime.

A layup by senior guard/forward Isaiah Johnson kicked off a tight second half. The Rangers led 39-32 at one point, but NMU tied the game at 41 with a three from junior guard Sam Taylor. Both teams battled back-and-forth, but Summers scored four straight points to tie the game at 51. Johnson made four late free throws, but Parkside rallied back to tie the game at 56, forcing an session overtime.

In the overtime period, Parkside raced out to a 62-56 lead. Free throws by Echols and a layup by Johnson brought the Wildcats to a three point trail, but three free throws from the Rangers sealed their 71-65 win.

Johnson finished with 21 points, followed by Echols with 18.

In Saturday’s contest, both PNW and NMU started off Saturday’s game close until NMU took a 14-9 lead thanks to an “and-one” scoring play from Summers. It would stay neck-and-neck as baskets from Summers and junior center Myles Howard extended NMU’s lead to 29-24. NMU would pull away into halftime as junior guard Kenton Mack sank two free throws to make the score 48-38 in favor of the Wildcats.

PNW pushed out to an 8-2 run out of the break, but NMU bounced back after Fruin’s five-point solo run to make it 61-52. After a PNW three, the Wildcats extended their lead to 12 after a Fruin three and a Summers free throw. The Pride rallied to within seven, but free throws from Echols, Johnson and Fruin iced NMU’s 86-74 win.

Four players finished in double figures as Echols and Johnson both scored 20 points each. Summers added a double-double with a career-high of 18 points and 11 rebounds, and Fruin also scored a career-high of 17 points.

The ’Cats will wrap up the team’s home schedule this weekend as they face off against the Saginaw Valley State University (SVSU) Cardinals at 7:30 p.m. on Thursday, Feb. 7, and then against the Northwood University (NU) Timberwolves at 3 p.m. on Saturday, Feb. 9 for a Senior Day celebration.

The four senior players on the team — Echols, Johnson, Prendergast and guard Kenton Mack — will be playing in their last regular season game from the confines of the Berry Events Center.

Though Prendergast will be announced as one of the departing senior players, he and the rest of the team know there are games to be played.

“It’ll be bittersweet, but we’ve got revenge on our minds against both of these teams,” Prendergast said. “Northwood just beat us [earlier] this season and Saginaw beat us good last year, so that’s what we’re looking forward to.”

After last week’s games, NMU (12-8, 7-6 GLIAC) is now listed in third in the GLIAC North Division standings and fifth overall in the GLIAC.