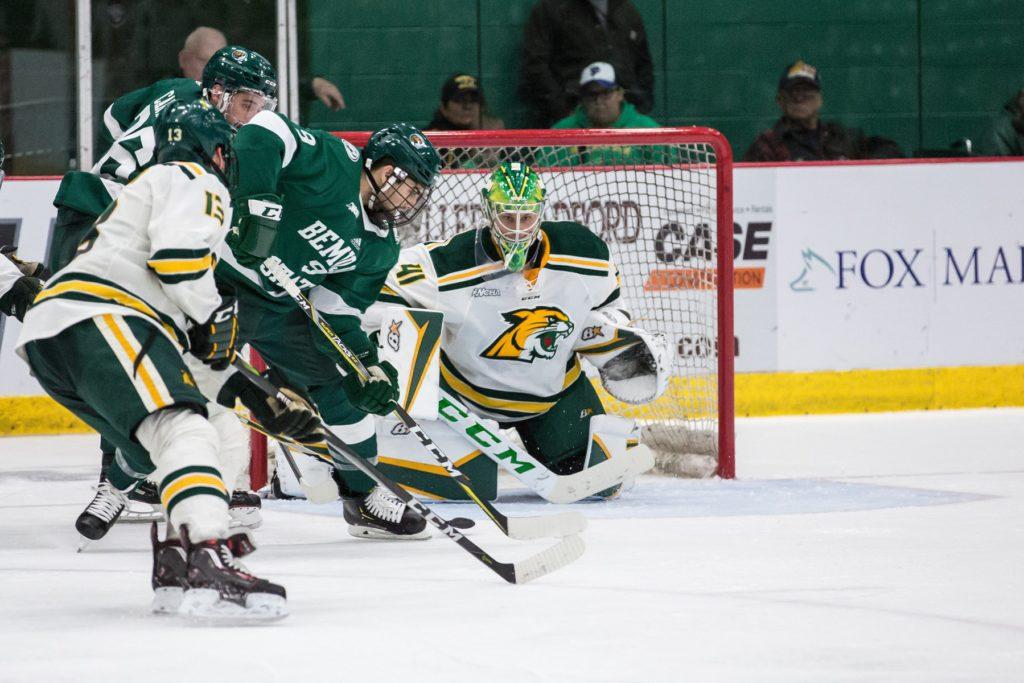 You might call it a mixed bag of results for the Northern Michigan University Hockey team on its trip to Alabama last weekend.

Despite outshooting the six-win University of Alabama-Huntsville (UAH) Chargers 43-24, the Wildcats skated to a 2-2 tie with the Chargers before losing in double overtime, giving UAH the extra WCHA point on Friday.

Saturday’s result was a better one for NMU, earning a 6-3 win behind six different goal scorers.

With the results over the weekend, the Wildcats are now 15-13-1 overall and 14-7-1 in WCHA play, moving into a tie for second place with 43 points with Bowling Green State University (BGSU).

First place Minnesota State-Mankato has put a stranglehold on the rest of the league, pulling away with 59 points. Behind Northern and BGSU sits Lake Superior State with 41 points, Bemidji State with 39 and Michigan Tech with 37, which are the three teams the Wildcats have remaining on the regular season schedule.

In Friday’s game versus the Chargers, NMU found itself quickly down 2-0 after two second period goals from UAH’s Jack Jeffers and Brandon Salerno came 2:21 apart.

Later in the second period, NMU senior forward Troy Loggins notched his thirteenth goal of the season on the power play with assists coming from fellow senior Adam Rockwood and junior Darien Craighead to cut the Chargers lead in half.

With just under six minutes to play in the third, the Wildcats tallied another power play goal, this one from freshman forward Ty Readman for his third of the season. Junior defenseman Philip Beaulieu notched his 20th assist of the season on the goal and sophomore Joseph Nardi also picked up his fifth assist of the year.

The Wildcats seemingly scored with 1:15 remaining in regulation when senior captain Denver Pierce shot the puck from the slot, which beat UAH goaltender Mark Sinclair and appeared to sneak just inside the right post.

The officials immediately signaled no goal and play continued. Officials reviewed the play at the next stoppage which came with seven seconds remaining in the game. Despite appearing to be in the net, the goal was subject to a review where it was determined by officials that the puck never fully crossed the goalline, thus the goal was waved off and the game went to overtime.

With 26 seconds left in the first overtime, freshman Griffin Loughran found the back of the net, seemingly giving the Wildcats the win.

Officials reviewed that play as well, and waved it off due to goaltender interference. The last 26 seconds wound down, resulting in an official NCAA tie and one point in league play for each team, while the teams went to a second overtime session, which featured three-on-three play rather than typical five-on-five action as demonstrated in both the first overtime session and regulation play to decide who gets the extra WCHA point.

Cam Knight scored in the second overtime for the Chargers, beating NMU senior goaltender Atte Tolvanen on a breakaway.

In Saturday’s contest, the Wildcats were in a hole once again, with Connor James scoring for UAH six minutes in to give the Chargers a 1-0 lead.

NMU responded with the next two goals, the first on the power play from freshman forward Vincent de Mey to even the score at 1-1 after one period, and the second coming from Loughran to give the Wildcats the lead in the second period.

UAH quickly tied things up two minutes later with a goal from Hans Gorowsky for his ninth of the year. NMU scored two more after that to go up 4-2 after two periods. Senior defenseman Tony Bretzman found the back of the net on the third goal while freshman Jarrett Lee scored his second of the year, which stood as the game winner.

Pierce and Loggins added third period goals, with Loggins getting the empty-netter to salvage the tie-loss the previous night.

Beaulieu had three assists in the game for a four-point weekend while Rockwood and Nardi each had two assists. Readman, sophomore Caleb Schroer and senior defenseman Ryan Black all added an assist.

Final shots on Saturday were 40-27 in favor of the Wildcats. Tolvanen stopped 24 while UAH netminder Jake Theut stopped 34.

NMU was 4-of-11 on the power play for the weekend, while killing off 8-of-10 Chargers opportunities.

The two teams met at the Berry Events Center in Marquette on Oct. 26-27 in each team’s WCHA opener. The Wildcats took a 3-0 win on Friday before falling in a 2-1 heartbreaker on Saturday on an Aaron Miller goal with three seconds left in the third period, after the Wildcats had a late goal of their own waved off due to goaltender interference.

Miller will be suspended for the first game of this weekend’s series after a checking-from-behind penalty he received in the Beavers last series versus Ferris State last weekend. The call happened at 8:22 of the second period, and Miller was issued a five-minute major and game misconduct. The WCHA decided that the suspension was warranted upon review in a news release this week.
Puck drop from the Sanford Center in Bemidji, Minnesota is set for 8:07 p.m. on both Friday and Saturday, Feb. 15-16.