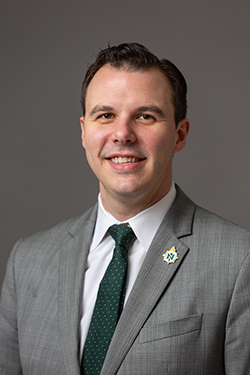 NMU administrators are mourning the loss of a recently appointed Board of Trustees (BOT) member.

Travis Weber, 33, died unexpectedly Monday, according to his obituary.

“The Northern Michigan University community is heartbroken at the sad news of Travis Weber’s passing,” NMU President Fritz Erickson said in a university statement. “We had only begun to get to know this talented and engaging man, but it was obvious that Travis would have brought a lot to the NMU Board of Trustees, and I know he had a strong desire to help NMU students. Our deepest sympathies go to his family, friends and associates for their loss.”

The former chief legal counsel for the Executive Office of Gov. Snyder was appointed by Snyder in October to an eight-year term beginning Jan. 1 to replace former Trustee Richard Popp.

“It is with great sadness and grief for our Board members to learn of Travis’ passing,” BOT Chairman Robert Mahaney said in the statement. “Travis was a talented, engaging gentleman who was poised to contribute in many positive ways to the NMU Board and the entire NMU community.”

Weber also served as deputy legal counsel and a senior policy advisor for the Michigan House of Representatives Republican Policy Office and earned a bachelor degree in political science from Michigan State University and a law degree from Valparaiso University School of Law.

Weber attended the December BOT meeting. He had completed his BOT orientation and was scheduled to participate in his first meeting as a trustee on Friday, according to the statement.

“In the short time that I had the opportunity to work with Travis, it was evident that he would have excelled as a trustee and become a valued member of the NMU family,” Mahaney said. “We deeply mourn the loss of Travis and extend our condolences and prayers to Travis’ family and friends during this incredibly difficult time.”