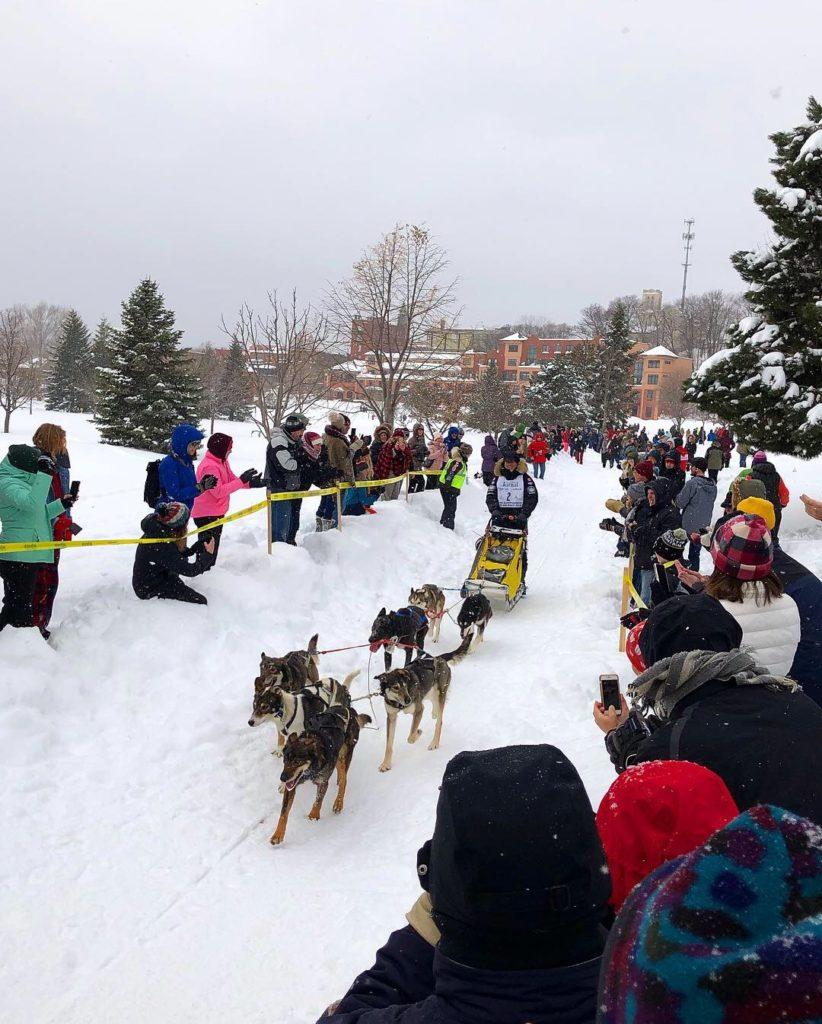 Snow fell upon hundreds of people lined up and down Washington Street Friday night, but it did little to dampen their enthusiasm. As the clock neared seven, the crowd began booming a count-down, “three, two, one!” A 12 dog-team vigorously burst forth, with their musher waving to the spectators as they passed.

Last weekend was the 30th annual U.P. 200, a 238-mile dog sled race from Marquette to Grand Marais, and back again. The race is an Iditarod qualifier, which is a premier race across Alaska, where some of the racers plan on competing in early March. With $35,600 in prize money on the line, 14 teams hailing from Minnesota, Iowa, Alaska, Canada, Wisconsin and Michigan, embarked on the two-day journey. The race drew spectators from around the region, including Michigan’s newly-elected Governor Gretchen Whitmer. At the opening ceremony, her voice emanated from the loudspeakers over the stirring crowd.

“The UP 200 is such a wonderful event—we get to showcase some of the amazing things we have to offer as a state, because this is the greatest state in the nation, right?” Whitmer said. “I’m thrilled to be here and I know that events like this don’t happen without the help of many, many volunteers, without the contribution of many businesses, so I want to use this as an example of people coming together in the most beautiful weather and the beautiful part of our state.”

However, this year’s race was especially memorable because the race ended early in Wetmore at the 169-mile marker. Due to the unusually large amount of snowfall that Marquette received within the past week, the markers for the trails that were put up a week prior to the race were nearly invisible, causing difficulty navigating the trails. According to the National Weather Service in Marquette, the region has received 61.3 inches of snowfall in February so far, which is nearly three times normal. High winds on Friday before the start of the race also filled in cleared trails with additional snow.

Organizers decided to call the race at the Wetmore checkpoint for the safety of the teams, and the winner was determined by the fastest time to that checkpoint instead of downtown Marquette. Mushers kenneled their dogs and finally got some much needed rest.

“After cutting the race short, I decided that the next morning we should hook back up our teams and race the rest of the way back into Marquette for the fans and families that came to see the race,” said Ryan Redington, a participating musher who placed 3rd in the race. After resting through the night, the mushers drove to the Michigan Welcome Center on Highway 41 and mushed to the Lower Harbor in Marquette for a ceremonial finish. The dogs, after having a night to rest, were still rearing and yipping to run when they came to end. It was an unusual finish, but it attracted one of the largest crowds and was just as exciting.

“I look forward to this race all year,” said Sidney Lucas, the Ambassador of Iditarod Education and regular attendee of the UP 200. “I’ve never, in my 15 years of attending, seen the race get cut short, so that took me by surprise because the mushers and dogs are trained for treacherous terrain and unforgiving weather.”

Ryan Anderson won the race with a finishing time of 21 hours, 26 minutes, and 57 seconds, making him a seven-time UP 200 Champion. As he came to the finish, he looked exhausted but his dogs screamed and pulled.

“My dogs just want to keep going!” Anderson said. “The unplanned stop and resting got them all fired up to keep running. I’d like to thank all the support and help from the volunteers, dog handlers, and fans that came to cheer us on at the finish, even though this wasn’t the real finish.”

Although the focus primarily falls on the musher and dogs during dog sled races, there are a number of unseen components at work behind the scenes to ensure the safety and well-being of the competitors. One such component are the handlers, who are members of the team that help prepare the dogs, as well as meet the racers at checkpoints to help them resupply and rest. Mike Varley, a handler for racer Laura Neese, described some of the unseen work that goes into the competition.

Another component is the work done by countless volunteers to ensure everything runs smooth. Mixed among the spectators were countless yellow-vested folk, dedicated to keeping the competition on track. One such volunteer was Randy Arndt, who has helped with the U.P. 200 for three years. His motivation stems from his own childhood dreams of dog sledding.

“From the time I was a kid, I read Jack London stories about sled dogs,” Arndt said. “I always wanted to have a sled dog team, but it just never happened in my life, so this is a way I could participate in a small way.”

Although the snowy conditions may have brought the race to an early close, the challenging weather was met with incredible perseverance from spectators and competitors alike. Snow may be a struggle, but it’s also an opportunity that allows Marquette to host unique events like the U.P. 200. Another veteran volunteer is Jill More-Jenkins, who has been assisting the event for five years now. For her, it began with her daughter discovering the race when she attended Northern.

“My daughter came here at Northern and fell in love with it when she was here,” More-Jenkins said. My heart was here, and I just love being with the animals and I love the community. It’s just a wonderful celebration they have here.”