Wildcats dammed up by Bemidji Beavers 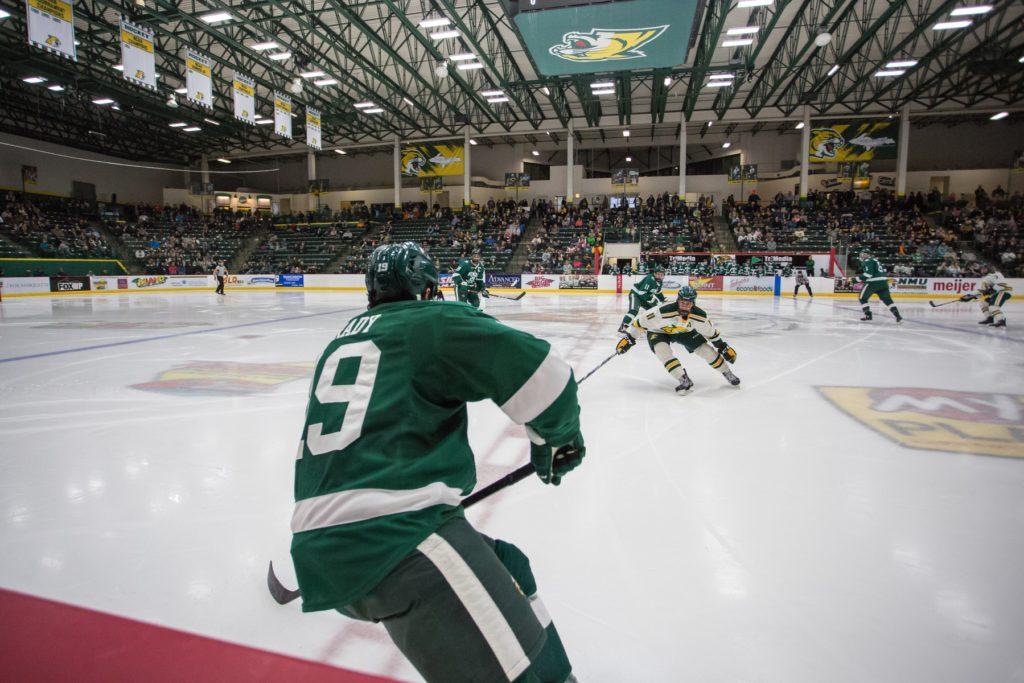 The Northern Michigan University Ice Hockey team may now have its back against the wall going into the final two weeks of the regular season.

The Wildcats suffered a 2-2 decision with a 3-on-3 overtime loss at Bemidji State University (BSU) on Friday, missing out on the extra WCHA point before being shutout by the Beavers 3-0 on Saturday.

NMU (15-14-2, 14-8-2 WCHA) entered the weekend in second place, and picked up just one out of six possible WCHA points with the tie on Friday. The Wildcats now sit tied for fourth with BSU at 44 points apiece, with the Beavers holding the head-to-head tiebreaker.

Now on the outside looking in for the final home ice spot in the WCHA playoffs, NMU has work to do in the final four games of the regular season.

NMU head coach Grant Potulny said his team ran into two main issues last weekend, dealing with a Beavers team who was unbeaten in five of its last six games, as well as travel issues coming home from Alabama-Huntsville a week prior. The team didn’t return from Huntsville until Monday after being stranded in Chicago due to weather.

“I think two things happened,” Potulny said. “They’re (BSU) playing extremely well, and I think travel was a real issue. The fact we didn’t get home until Monday afternoon, were home for two days and then had to go again. I think those things are real, they’re not excuses. And I think we beat ourselves too.

“Any team, any sport, any level, teams can beat themselves,” Potulny added. “You have a really hard time generating anything positive in the game. You start going the right direction and then whether it’s a penalty or a turnover or the things that are completely in our control, we find a way to get that self-inflicted wound.”

NMU took a 1-0 first period lead in Friday’s contest on a shorthanded breakaway goal from senior forward Troy Loggins, his 15th tally of the year. Seniors Adam Rockwood and James Vermeulen assisted on the goal which came at the 14:33 mark of the period.

BSU tied the game just 50 seconds later when Charlie Combs beat NMU senior goaltender Atte Tolvanen on an odd deflection that found the back of the net to even the score at one.

Neither team found net in the second, and the Wildcats re-took the lead 6:51 into the third period on freshman forward Griffin Loughran’s fifth goal of the season.

Similar to Loggins’ goal, Loughran also scored on a shorthanded breakaway, giving the Wildcats a 2-1 lead with less than 14 minutes to play.

Bemidji struck soon after to tie things up on its sixth power play attempt of the night. After fending off the first five Beaver’s advantages, Brad Johnson scored from the blue line to make the score 2-2, sending the game to overtime.

Regular 5-on-5 overtime ended undecided, making the game an official NCAA tie while the Beavers scored in 3-on-3 for the extra league point.

Final shots were 34-18 in favor of the Beavers. Tolvanen stopped 32 while BSU goaltender Zach Driscoll stopped 16.

NMU was unable to find anymore offense on Saturday, getting outshot 32-21 with BSU goals from Adam Brady, Brendan Harris and Nick Cardelli.

Tolvanen stopped 29 on Saturday while Driscoll set aside all 21 NMU attempts for the shutout.

The Wildcats now look ahead to No. 18 Lake Superior State (LSSU) this weekend at the Berry Events Center. The Lakers are 20-8-2 on the season and 15-7-2 in conference play, sitting tied for second place with 47 points.

The teams split their first series in Sault Ste. Marie on Nov. 23-24 with LSSU winning 4-2 on Friday before the Wildcats rebounded for a 2-1 win Saturday.

Potulny credited LSSU for being one of the best team’s in the league at the moment, winning six of its last seven games.

“They’re probably the hottest team in college hockey,” Potulny said. “They have the best line in the league, they’ve got a great power play and they’re getting goaltending. I honestly think, going into the weekend, that we’re the underdog. They’ve earned everything that they’ve gotten this year and we’ve got to find a way to fight, claw and scratch.”

The series also features the Cappo Cup, presented yearly to the winner of the season series. If the series is split, the trophy goes to the team with the most goals in the series.

The Wildcats have claimed the Cappo Cup for the last two seasons, and Potulny knows what’s at stake again this weekend.

“When you’re playing for a trophy, you need to go leave it all on the line,” he said.