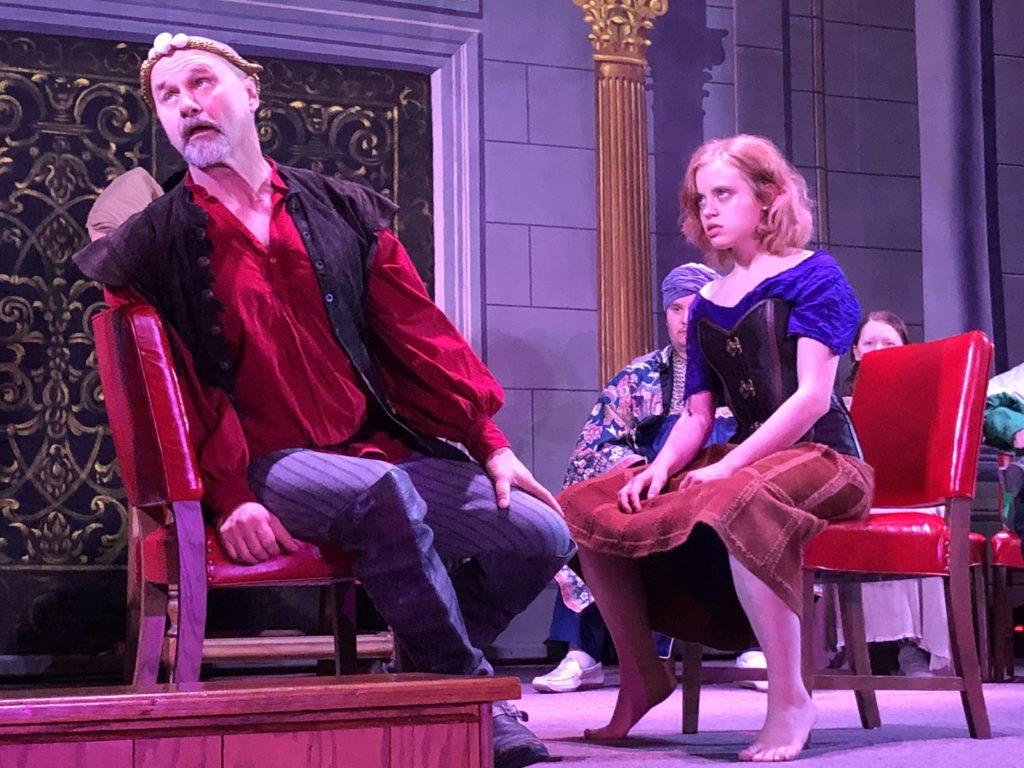 Two auburn-mahogany doors open into a 14th century courtroom-esque theatre where red velvet cushions fill the air with a vintage scent. Characters clothed in taupe colors assemble the stage in a comedic fashion. Improvisation spirals from characters jumping into the audience to kings and popes dancing to the funky legendary beats of the late Prince. Elements of the modern world intertwine in this medieval setting, where two rival houses compete for the crown. Take a seat into the world where Shakespeare was born, in the pit where theatrical traces were forged, and sit at the round table amongst kings and queens while enjoying a feast of barbarian bisque and bread, poultry of the parliament, squiring spuds and of course, baron brownies.

What some might have to travel in a time machine, others can witness the absurdity of storytelling in “Medieval Dinner Theatre” this Friday and Saturday night in one of Marquette’s downtown venues. The Forest Roberts Theatre (FRT) will joust up the stage for a bloodbath and hilarious horseplay in the “The Medieval Dinner Theatre” at 7:30 p.m. on Feb. 22 and 23 at the U.P. Masonic Building located on 128 W. Washington St.

Directed by Jamie Weeder, the production features a variety of aspects not typically showcased in a normal play, such as the madrigal choir directed by NMU Director of Choir Erin Colwitz, the Borealis Dancers, live music from Joel and the Good Boys and “The Maniac King,” which is a short comedic play by Weeder as well. Attendees can also take part in the dinner, where DIGS Gastropub will serve Medieval-prepared entrees. There’s a lot of different things going on with this production and it required a ton of coordinating, stage manager, freshman theatre and entertainment arts major, Sophie Sam said. The main goal of this event is to “transport” people into that Medieval setting, enjoy a night out and help raise money for the First Nighters Club.

“Theatre in general is important because it provides an artistic outlet for people to go and get away from their everyday lives a little bit. It’s one of the most wonderful ways of escapism and just like music or any other form of entertainment, it’s so necessary to get that break from whatever else is going on in life both for the performer and audience member,” Sam said. “You never know what anyone is dealing with or going through so maybe an evening out like this is just the kind of entertainment they need. Or maybe they just want a nice dinner too.”

The cast and crew have been rehearsing since December and recently started preparing at the Masonic, Sam said, noting that the building was the “ideal venue” for a production like this from the architecture to the layout. Without the Masonic, a play like this might not have worked on campus, Sam added.
As a stage manager, Sam’s main job is communicating between the different aspects of the production and everything is fine-tuned before the big day, and solving issues if they pop up and answering questions so everything happens as planned.

“Theatre comes in many different forms whether it be a play or musical and sometimes you get something that’s a lot more interactive and just different from your usual experience. So I hope they take away that there’s all sorts of theatre and all of them deserve merit and time,” Sam added.