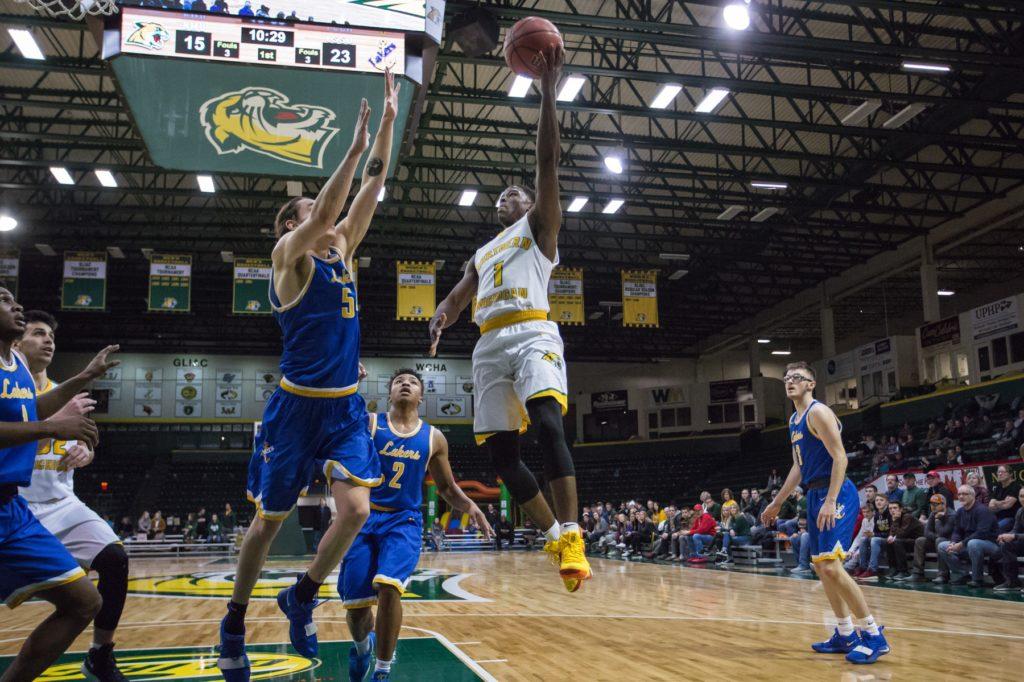 NMU senior guard Naba Echols rises up for a layup against Lake Superior State in a previous matchup earlier this season.
Photo courtesy of NMU athletics

The Northern Michigan University Men’s Basketball team was unable to secure a home playoff game as it lost both of last weekend’s games to the Grand Valley State University (GVSU) Lakers 85-62 and to the No.13 ranked Davenport University (DU) Panthers 74-71.

“After a good week in which we were ranked eighth in the [Division II Midwest] region, we came out at Grand Valley and I thought we looked like the Walking Dead,” head coach Bill Sall said. “But on Saturday, we didn’t play particularly well at the beginning, but we found that energy and had a couple of chances to win the game.”

Senior guard Kenton Mack said last weekend’s games were tough losses, but is moving on from them.

“We were in position to control our own destiny, but we’re not looking at those anymore, we’re more looking ahead at this point,” Mack said.

GVSU started off Thursday’s game with a 7-0 run, before senior guard Naba Echols sank his only three of the game. Down 17-11, the Wildcats surged back to within three after a three from junior guard Marcus Matelski. However, the Lakers answered back with another seven-point run, then Matelski sank his second three to make it 24-17. GVSU would use a 14-0 run to head into halftime up 46-20.

In the second half, the Lakers’ raced out to a 54-29 lead, leading up to a three from sophomore guard Alec Fruin. Threes from senior guard/forward Isaiah Johnson and junior guard Sam Taylor cut their deficit to within 18 with 12 minutes remaining, but NMU couldn’t get any closer as GVSU pulled away to win 85-62.

Johnson paced NMU with 28 points, making six out of the team’s 13 threes in the game. Taylor followed up with a season-high of 18 points.

On Saturday, the Panthers raced out to a 10-2 early lead. After a Matelski three and a shot by junior center Myles Howard, DU extended their lead to 26-9. With seven minutes remaining in the first half, NMU rallied back to within four after a three from Fruin. The Wildcats got to within six as free throws by Echols and Taylor sent the team into halftime down 38-32.

Out of the break, DU led 50-36, but Echols piled on 17 straight points to tie the game at 53. After the Panthers scored six points, a Taylor three and Johnson’s free throws brought the Wildcats to within one point. As DU’s Dyllon Hudson-Emory’s shot made it 74-67 with 3:25 left, NMU rallied back thanks to free throws from Echols and Johnson, but the upset bid came up short as DU went on to win 74-71.

Echols finished with a season-high of 27 points, while Johnson, Taylor and Fruin each added 10 points.

“We knew it was going to be a dogfight, being that they were very good,” Sall said on the Davenport game. “We had three stops in a row [at the end], but we missed a couple opportunities and came away with a heartbreaking loss.”

Although Tech has been eliminated from playoff contention, the ’Cats are hoping to earn a higher seed as they currently sit in a three-way tie for fifth place in the standings. NMU shares the spot with GVSU and Lake Superior State University (LSSU), who NMU has split the season series with. GVSU hosts DU, while Ferris State University visits LSSU on Thursday.

“It’s a must-win. It’s the most simple and accurate way I can put it,” Mack said. “Right now, the top four seeds are pretty much locked, but we’re in a fight for the five seed.”

Mack isn’t worried about the tournament placing, but said the team would like a simple road in the playoffs.

“We’re not looking too much on who we play seeding-wise, but just to put us in the best possible position to keep playing as long as we can,” Mack said.