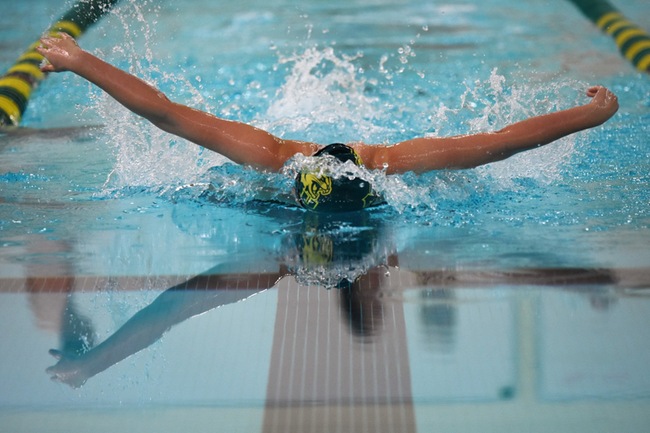 Reflections shine on the water’s surface as a NMU swimmer breaks through a translucent surface.
Photo courtesy of NMU athletics

The NMU Swimming and Diving team had an impressive showing this past week at the GLIAC Championships in Cleveland, with the men taking second place out of six teams and the women taking third. The meet consisted of four days of the conference’s best swimmers plugging the lanes, and the ’Cats did more than hold their own.

On Wednesday, the women won two events led by junior Rachel Helm and sophomore Lena Soulas. Helm took home the 200-yard Individual Medley title for the third straight year with a time of 2:00.79, a conference and school record. Soulas swam to first place in the 50-yard Freestyle with a time of 23.57 seconds.

In a heartbreaking finish, the 200-yard Medley Relay team of seniors Regan Kilburn and Helm, junior Madelyn Irelan and sophomore Margaret Vaitkus took home second place by finishing less than a second behind the leaders.

After an impressive first day, including multiple other performances that gave the Wildcats points, NMU was in third place with 122 points, trailing behind Wayne State University (WSU) and Grand Valley State University (GVSU).

On the men’s side, senior Ryan Leonard scored the only Wildcats’ victory on the first day, winning the 200-yard Individual Medley with a time of 1:47.10. This was Leonard’s fourth win in the event of his career, as five other NMU swimmers earned points in the event.

On the second day, junior Rachel Helm was once again a highlight for the women’s team. She took home her second victory of the meet in the 100-yard butterfly, with a time of 55.06 seconds. Freshmen Briana Arnold and Emma Love, and junior Madelyn Irelan also placed in the event for NMU. In a close finish, the 200-yard Freestyle Relay team consisting of sophomores Vaitkus and Lena Soujas, Helm and Kilburn finished in second place with a time of 1:33.34, just 0.4 seconds off of the leader.

Soujas had an impressive showing in the 200-yard Freestyle, coming in second place with a time of 1:49.34, 0.2 seconds off of a school record. NMU would remain in third place after the second day, as WSU and GVSU were still leading the pack.

Budai captured another victory for the NMU men, winning the 200-yard freestyle with a time of 1:38.10. Junior Jonas Reinhold, freshman Jon Busse, senior Grantas Dapkus and freshman Henry Bauer all earned points in the event for the ’Cats. After the second day, the Wildcats stayed in third place behind WSU and GVSU, but trailed the second place team by a slim margin.

In the 800-Free Relay, the men captured the title for the fourth year in a row. The team consisting of Reinhold, Busse, Dapkus and Budai won with a time of 6:38.57. Three Wildcats placed in the top eight in the 100-yard backstroke, as Bundzis finished in third place, Budai fifth and Cosgrove seventh. NMU was right in the thick of things heading into the final day, as they passed WSU for second place and only trailed the leader GVSU by 6.5 points.

On Saturday, the final day of the meet, Helm had another dominant outing. She won two events and was named GLIAC Women’s Swimmer of the Year. She captured the 200-yard Backstroke title with a time of 1:56.21. Helm was also a part of the 400-yard Freestyle Relay team that won the relay and broke a meet record in the process. The team of Helm, Vaitkus, Kilburn and Soulas had a winning time of 3:25.45. After a highlight day for the Wildcats, the team finished in third place with 725 points behind WSU and GVSU, but still nearly 350 points ahead of fourth place.

Budai continued his amazing showing for the men, as he took home the 100-yard Freestyle title with a time of 44.12 seconds. In the 200-yard backstroke, five of the top 16 finishers were from NMU. Bundzis finished in second with a time of 1:44.25, and right behind was Leonard in fourth place. With 818 points, the Wildcat men took second place, finishing just behind GVSU by 30 points.

With the GLIAC Championships in the rear view mirror, the team’s focus shifts to the National Championships, held in Indianapolis, Indiana beginning on March 12.

“Right now we really focus on the NCAA’s, people and practices are a little more specific to them,” Voigt said. “We have a good group, and they’ll support each other all the way.”