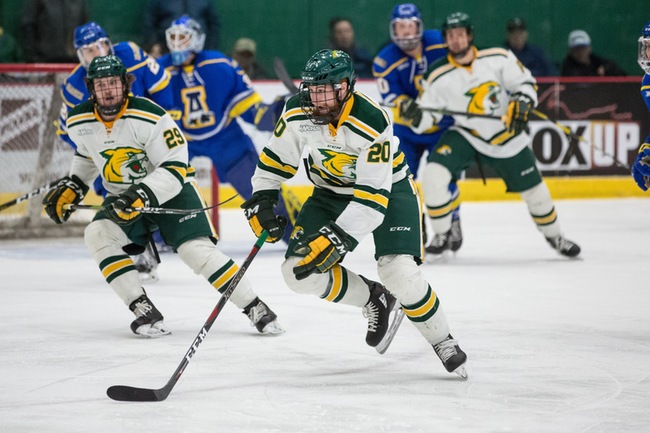 As the old saying goes, play them 10 times, you might only win nine.

The Northern Michigan University Ice Hockey team has seen No. 15-ranked Bowling Green State University (BGSU) nine times over the last two seasons, winning six of those contests, and will see the Falcons (23-9-5, 16-8-4 WCHA) for the 10th, 11th and possibly 12th time in two years this weekend in a rematch of last year’s WCHA semifinals.

The Wildcats (21-14-2, 18-8-2 WCHA) swept Alaska-Fairbanks (UAF) in the quarterfinal round at the Berry Events Center last weekend, edging the Nanooks 5-4 in double overtime on Friday before another narrow 4-3 win on Saturday to set up this weekend’s showdown between two opponents who know each other all too well.

The statistics say it all for NMU head coach Grant Potulny, who knows his team’s familiar foe ranks toward the top in several categories.

“If you just look at the numbers, they’re a heck of a hockey team,” he said. “They’re in the top five in wins in the country, they’re top five on the defensive side of the puck, they’re top three in both penalty kill and team defense. Then the offensive side, they’re top 10 in team scoring.

“The biggest thing for us is going to be our ability to play with pace and use the [Olympic size] ice sheet to our advantage,” Potulny added. “You fight, you claw and you scratch to get home ice and there’s a reason home ice is so valuable. Especially for us that we have got to make sure we have incredible pace, incredible speed and play at a level where it’s a little bit of a track meet. That’s how we want to play the game.”

The two-seed Wildcats needed to erase two-goal deficits both nights against the seventh-seeded Nanooks last week.

Falling into a 4-2 hole in the third period of Friday night’s game, NMU freshman forward Griffin Loughran struck on the power play for his sixth goal of the season to pull within 4-3 with roughly 14 minutes to go in regulation.

NMU was unable to find the equalizer early enough, forcing them to pull senior netminder Atte Tolvanen for the extra attacker.

Now in a 6-on-5 situation in the final minutes, it was senior forward Adam Rockwood sneaking a backhanded rebound by UAF junior goaltender Anton Martinsson with 14 seconds left to tie the game at four.

After two lengthy reviews, the goal stood and the game went to overtime.

After a scoreless first overtime which featured big saves from both Tolvanen and Martinsson to keep their teams in the game, Loughran connected with sophomore linemate Joseph Nardi in the second extra frame. Loughran skated the puck around the UAF net and fed a pass out front to Nardi who put it home, sending the Berry Events Center crowd home happy as well.

NMU outshot the Nanooks 44-42 Friday, with Tolvanen stopping 38 and Martinsson stopping 39. Tolvanen’s performance on Friday was also good enough to surpass the school saves record, and had 3,461 career stops for the Wildcats after Friday.

Loughran and Nardi connected three times in the Friday game, with Loughran assisting on both of Nardi’s goals, the other which came in the second period to tie the game at 1-1. Nardi also assisted on Loughran’s goal which made it 4-3.

Down 2-0 in Saturday’s game, NMU received two quick tallies from senior captain Denver Pierce and freshman forward Vincent de Mey to notch things back up in the second period. Pierce struck at the 12:54 mark, and 42 seconds later de Mey found the back of the net to tie things up at 2-2.

Senior forward Troy Loggins and junior forward Darien Craighead each recorded goals in the third to take the lead 4-2. Alaska-Fairbanks junior forward Tyler Cline made it 4-3 with the extra attacker, but NMU held on for the sweep, advancing to the semifinals for the second consecutive year.

In last year’s semifinals, it took three games for the Wildcats to end BGSU’s season. NMU earned a 6-1 blowout on Friday before dropping a 1-0 decision Saturday with the offense disappearing. It took overtime in the decisive game three on Sunday before Loggins scored on a slap shot that got past Falcons then-sophomore goaltender Ryan Bednard, giving the Wildcats a 3-2 win and sending them to the WCHA Championship game.

Potulny said he knows the importance of trying to wrap up playoff games on Saturday.

“I was hoping we would learn from a previous run in the playoffs of how hard it is,” he said. “If you look back on history, we’ve had big wins on Friday night in the first two rounds and couldn’t close the deal out on Saturday.

“As much as we struggled on Friday to win the game, the maturity of our team to come back and close the game out on Saturday was really important,” Potulny added about the UAF series. “You get to that Sunday game, you just don’t know what can happen. I hope this year, we learned from that first round that everybody is playing for their lives. It doesn’t matter what place they’re in. I’m really certain that we won’t have that mental letdown this weekend. They know the history of playing this team and the fact it’s become a big rivalry for us.”

Three-seed BGSU got back to the semifinals by sweeping sixth-seeded Michigan Tech last weekend by scores of 3-2 and 6-2.

On the other side of the bracket, one-seed Minnesota State-Mankato swept eighth-seeded Alabama-Huntsville, while four-seed Lake Superior State swept fifth-seeded Bemidji State, setting up the other semifinal matchup between the Mavericks and the Lakers in Mankato.

The winner of each will move on to the WCHA Championship game next Saturday.