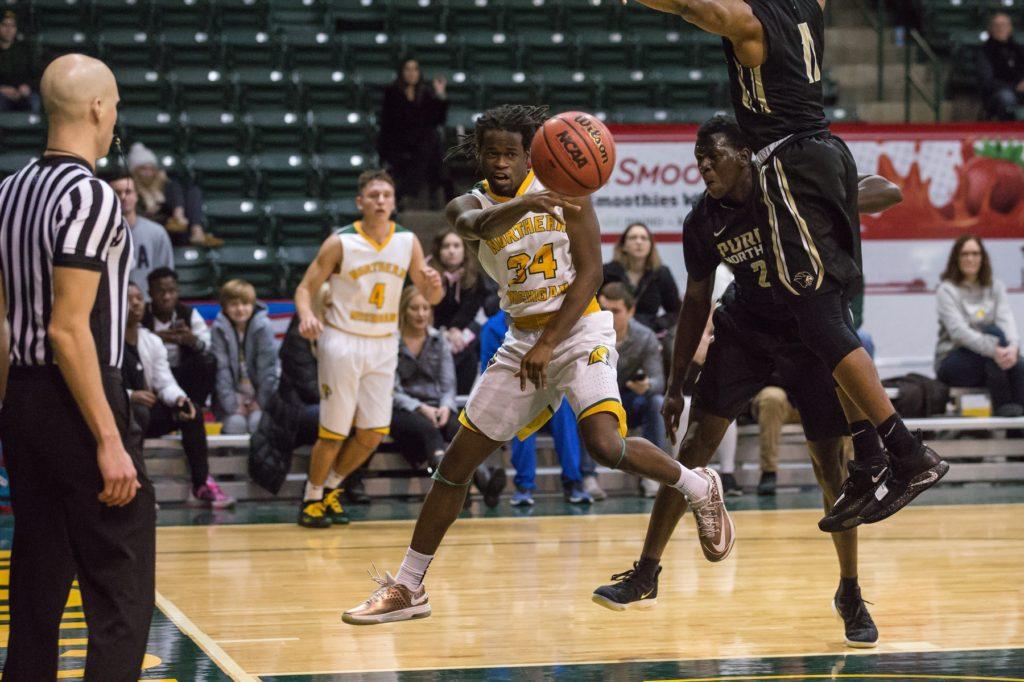 Although the season for the Northern Michigan University Men’s Basketball team came to a halt in the GLIAC Tournament, it brought some highlights from its most accomplished season in a decade.

NMU finished out the regular season with a 17-12 record, 11-9 in conference play. However, head coach Bill Sall said their record could’ve been better.

“The way we did it, we played some [good] basketball down the stretch,” Sall said. “We have had a number of quality wins and moments, it’d be nice to put a few more [wins] at the end.”

The ’Cats tipped off the regular season with a five-game win streak, starting with a sweep in the GLIAC/GVC Challenge against the McKendree University Bearcats and the Lewis University Flyers.

NMU reached 5-0 after wins in the Thanksgiving Tournament at Hillsdale College, but suffered their first loss at Northwood University, 76-64.

The ‘Cats snatched three more wins, including a 108-69 victory over the Purdue Northwest University (PNW) Pride. The 108 points scored was the most a Wildcat team has scored against a Division II opponent since 1993-94 versus Wayne State University. That game saw four players reach double figures in scoring, including senior guard Naba Echols who recorded a double-double of 20 points and 10 assists.

During Christmas break, NMU suffered a mid-season slump, losing six straight games. The skid was snapped on January 17, as they topped the Davenport University (DU) Panthers, 77-63.

Arguably the most significant win of the season came on January 26, with the Wildcats topping archrival Michigan Tech University Huskies, 63-59. Despite Tech’s Trent Bell going 6-for-8 from the three-point line, Echols shined on his homecourt, scoring 23 points and shooting for a perfect 6-for-6 from the free-throw line.

Just as things were going their way, NMU lost in overtime to the University of Wisconsin-Parkside Rangers, 71-65. Redshirt-freshman Troy Summers broke out for a career-high 12 points and Johnson recorded 21 points in the loss.

NMU responded with a 86-74 win over PNW as both Johnson and Echols recorded 20 points each. Summers added his second career-high in two games, scoring 18 points while Fruin added 17 points.

The team would win three out of its next four games, including the end of a 12-game losing streak to the Lake Superior State University Lakers and clinching a berth in the GLIAC Basketball Tournament. The Wildcats’ 73-68 win over the Lakers saw Echols and Johnson combine for 48 points and the defense holding LSSU to zero second-chance points.

To kick off the postseason, NMU came out in the Quarterfinal game and beat Ferris State University for the first time in eight games to advance to the Semifinals where they faced then-No. 8 ranked DU. Despite a close game, the Panthers would pull away from NMU after an early second half eight-point run.

“We made really good steps, but the most disappointing thing with this group of seniors is that we couldn’t hang a banner,” Sall said. “With seven true road games and having ourselves as the [region’s] seventh seed and not making it in, those were all hard pills to swallow.”

Sall mentions that Fruin, along with junior guards Sam Taylor and Marcus Matelski and forward Myles Howard are expected to return next season. The team is expecting redshirt-freshman Ben Wolf to provide center depth and sophomore forward Dolapo Oliyanka to fill in after an injury ended his season.

Sall said that he’ll have depth through next year’s team, but he’s counting on his returning players to step up next year.

“That’s going to be our senior crew. Like Naba, Isaiah, and [Max Prendergast and Kenton Mack] all had great careers here, but that mantle gets passed to your next senior class,” Sall said. “Those guys have to step up and be readily accepted and become the ones that are in the gym beyond practice and summer and continue to make sure the rest of the guys play harder.”