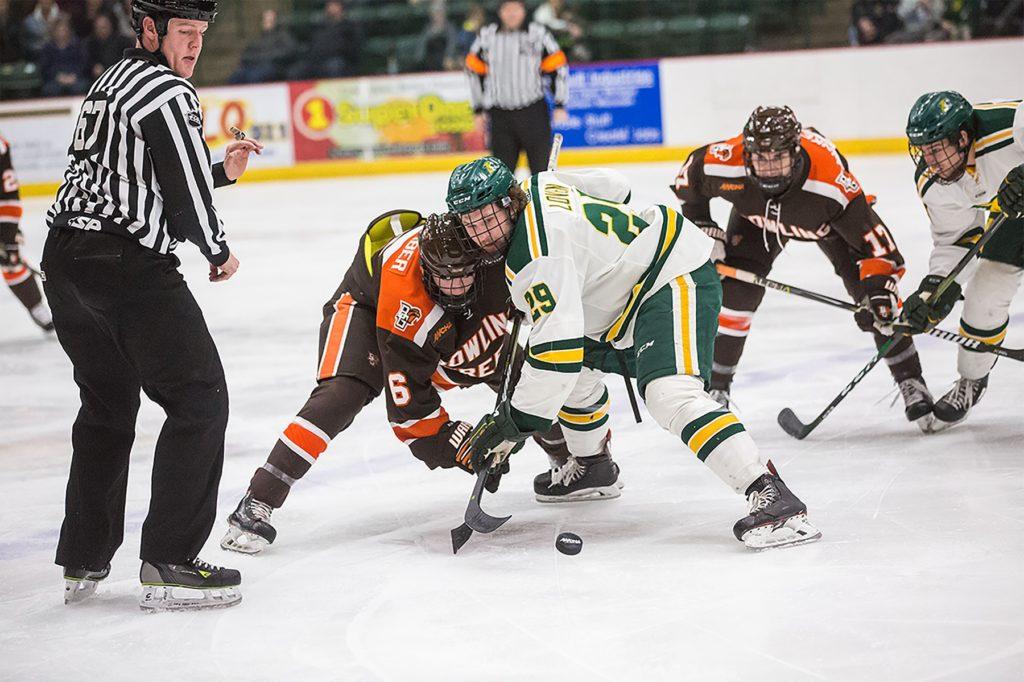 All good things must come to an end which was the case for the Northern Michigan University Ice Hockey team last Saturday.

The Wildcats fell flat on Friday night, dropping a 6-1 decision to then-No. 15 Bowling Green State University (BGSU) before falling in a double overtime heartbreaker 2-1 on Saturday, as NMU’s season came to a screeching halt in the WCHA semifinal round at the Berry Events Center.

NMU head coach Grant Potulny, who completes his second season as the Wildcats bench boss, talked about the rollercoaster of a season it was.

“We had a lot of ups and downs this year,” he said. “We started the year 3-7 in our first 10 games and from that point, on we were 18-9. A lot of teams, you could have lost [your players] at that point. There were a lot of expectations, guys were maybe not having the years they would have hoped. There’s other teams in the country that had this same type of pre-season expectations and never came out of it.

“I give our leadership group, especially [senior captain] Denver Pierce, a ton of credit,” Potulny added. “He pulled us along and got us to a point where, at the end of the day, if you look back on the season, we were picked to finish second and we finished second. We were picked to have four guys on the [All-WCHA] First Team and we had three. We got ourselves in a great position and on Saturday night we played a fantastic game.”

Fantastic games aren’t always good enough however. Sometimes, it’s a matter of puck luck and for the Wildcats, it didn’t go their way on Saturday night.

“We hit four pipes,” Potulny said. “Not pipes where the goalies know it’s not going in. The goalie was beat and they just didn’t go in. That’s the hard thing about playoff hockey: you get to the point where you’re playing good teams. Over the last two years, we’ve played Bowling Green 11 times and that’s as even as it gets. We’ve won six and they’ve won five. It’s just disappointing when you play a good game and can’t come out as the victor.”

Freshman forward Griffin Loughran had the lone goal for the Wildcats on Friday, scoring at the 8:55 mark of the third period to make it a 4-1 game. Sophomore forward Max Johnson had two goals and two assists for the Falcons, and senior defenseman Adam Smith was credited with the game-winning goal, which at the time made it 2-0 in favor of BGSU.

Bowling Green again gained the upper hand on Saturday, going up 1-0 in the first period on Connor Ford’s 17th of the season and second of the weekend.

The Wildcats drew even with junior Darien Craighead beating Bednard on the power play 21 seconds into the second period, with assists coming from junior defenseman Philip Beaulieu and senior forward Adam Rockwood.

The team’s stayed deadlocked until the second overtime frame, when BGSU sophomore Sam Craggs beat Tolvanen, sending the Falcons into the championship game.

Despite the earlier than hoped for exit, NMU was tabbed with three WCHA individual award winners this week.

Beaulieu was named Defenseman of the Year with six goals and a league-leading 22 assists, while Tolvanen earned Goaltender of the Year honors with 18 wins and five shutouts. Tolvanen is a four-year All-League honoree, and is on the All-WCHA First Team for the second year in a row.

Potulny also wanted to thank his senior players in Saturday’s losing effort for setting the program up for success in the future.

“I’m proud of how our guys competed and battled,” he said. “I’m really proud of what that senior class has done in two years. They’ve really given us a chance to build off of that for the future, whether in recruiting or visibility nationally or expectations within the program. All things were built off of the backs of the hard work of those seniors.”