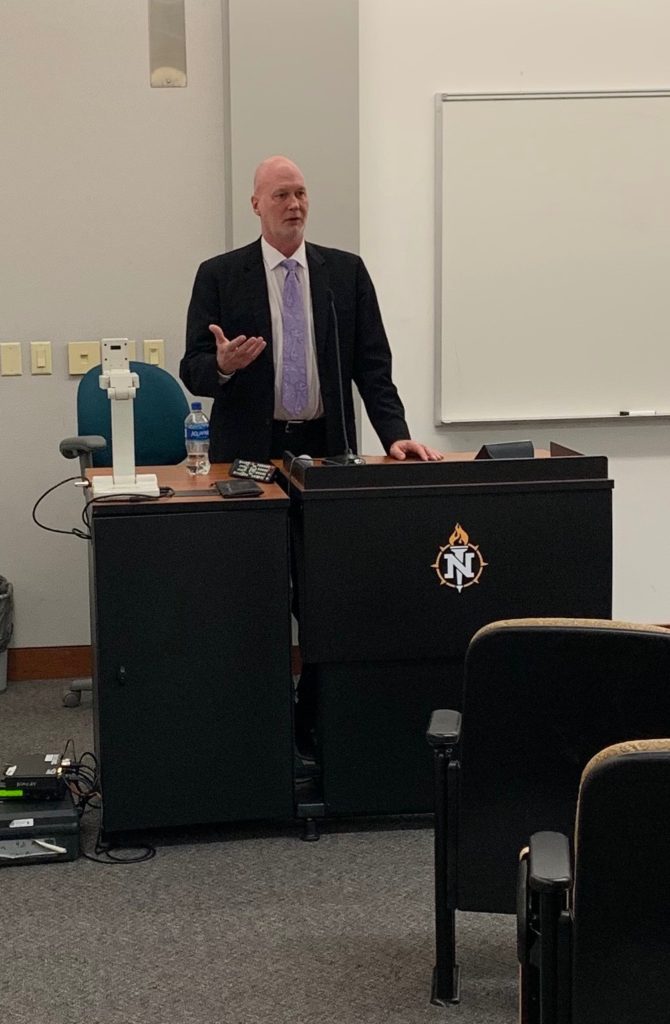 Incidents of sexual assault in the U.S. military have become more common in recent years and issues with the legal process surrounding sexual assault prosecution in the military make it rare for the accused to be prosecuted, retired Air Force prosecutor Col. Don Christensen said.

“Last year there were 5,111 reports of sexual assault,” Christensen said. “Of those 5,111 cases, 406 went to trial. Of those 406 cases that went to trial, 166 were convicted. I don’t think there’s any way to look at that other than failure. It’s not delivering any justice and it’s not discouraging anyone to commit sexual assault.”

Christensen spoke about the issues leading to these new reforms and procedural changes to an engaged audience of students, community members and veterans on
Tuesday, March 26 in the Mead Auditorium.

Christensen was invited to come to NMU by Dean of Library and Instructional Support Leslie Warren to share information about his career reforming sexual assault procedures in the military.

Christensen said he joined the Air Force in 1991 after graduating from law school and was the Judge Advocate General lawyer for roughly 23 years where he focused on sexual assault cases.

Throughout his time working with these cases, Christensen said he was able to notice all the issues surrounding sexual assault in the military and decided to leave his position and work for Protect Our Defenders, which is a human rights organization with the mission of advocating for sexual assault survivors in the military.

“Sexual assault cases are very challenging and we’re trying to bring justice to somebody that was wronged and let them know there is someone fighting for them,” Christensen said in an interview.

“At that time [when the organization was founded seven years ago], it was rare for survivors to feel like someone was fighting for them. We realized how much of an issue it was and how much attention it needed.”

There have been new reforms on sexual assault prosecution processes in the military recently, Christensen said. These reforms include enhanced victim protection of mental health records, pre-trial process reforms so a victim can use prepared statements and isn’t forced to testify and victim appellate rights to appeal a judge’s hearing if rules were violated. Victims now have access to a free attorney who serves as that survivor’s advocate and provides them with legal advice.

“That’s been a game changer in a sense that prior to that they had no one who spoke for them. A prosecutor speaks for the state or the federal government. In the case of the military, the military, but not for the survivor,” Christensen said. “Having somebody in their corner who they can have confidential communications with is really huge on increasing their confidence.”

“I absolutely think this media attention is important because it puts pressure on both the military and Congress to do something
about it,” Christensen said.

In addition to the attention from media, the attention Congress placed on this issue helped increase survivor confidence in coming forward because they know they can speak to their Congressional representative or a media outlet if they are being mistreated in the process.

“I hope to professionalize the military justice system and make sure that when men and women come forward, they’re treated with respect,” Christensen said. “Right now, the odds of being convicted after committing an act of sexual assault in the military is less than one percent, and we need to ensure that victims are treated fairly.”