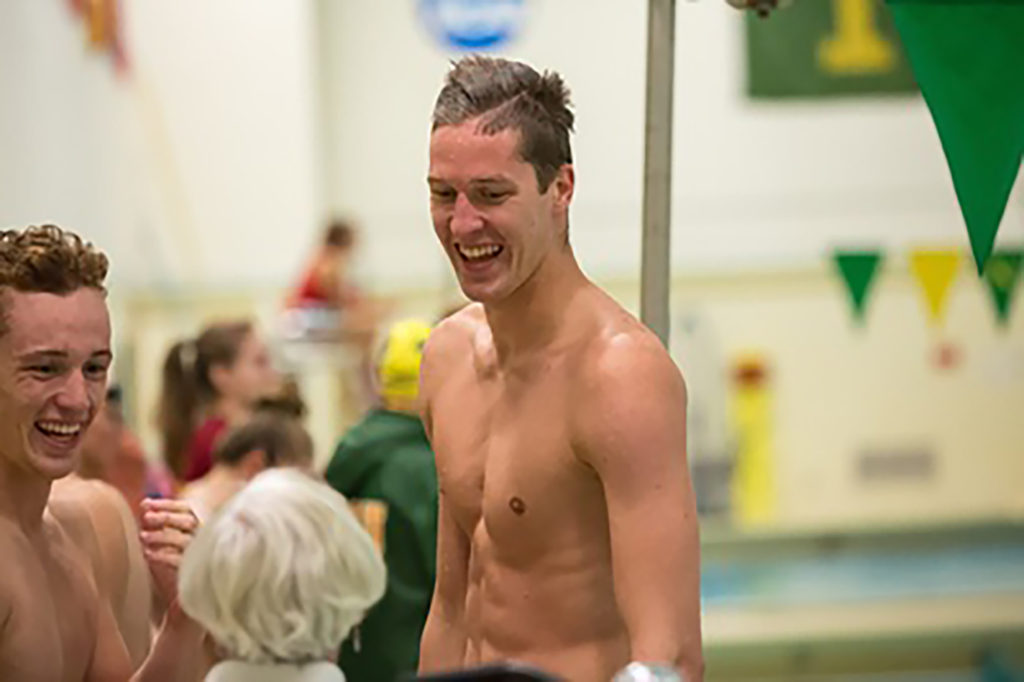 Senior Renars Bundzis knows the rewards of cooperating in a family environment to achieve an ultimate goal.
Photo courtesy of NMU athletics

Life in college can be difficult for a student-athlete to manage, such as studying for exams and participating in practices, conditioning exercises and games.

However, senior backstroke swimmer Renars Bundzis is not only competing for the Northern Michigan University Swimming and Diving Team, he’s also focusing on classes while raising his 8-and-a-half-month-old daughter, Eleanor, at home with his wife, former NMU swimmer Abigayle (Schieber) Bundzis.

Despite a hectic schedule, Bundzis has found ways to balance his busy life.

“It’s a lot of time management, getting lists and checklists taken care of. I already wake up for practices at 6 a.m., but my professors have been super helpful here,” Bundzis said. “Luckily, it’s my senior year here, so it’s been pretty easy.”

Bundzis said his family travels to every single meet and he mentions them as his motivation to succeed in and out of the pool.

“They always come to my meets and when I’m at school and with all of the technology, I can FaceTime them a couple times a day too,” Bundzis said. “For having a college career and a family, you have to represent yourself and everyone around you, so it’s definitely part of the competition.”

Before enrolling at NMU, he was part of a travel swimming team and was named as their best swimmer by coaches. Representing his native country, he won a championship with them.

The Riga, Latvia native said he likes being here at NMU, but is more adapted to competing at a higher level.

“Marquette is a very nice place to be in, but I’m used to being a bigger city,” Bundzis said with a laugh. “Such as competing in the youth Olympics and world championships, I’ve been [competing] all over the world it seems.”

In the last three seasons, Bundzis finished with All-American honors in the backstroke event and finished second in the NCAA. He also finished with 12 victories in 2018. He also medaled in gold in the GLIAC Championships in the 200-yard final, and a silver medal with the 400-yard Medley relay team at a time of 3:17.58. On top of all of that, Bundzis found time for school and was listed on NMU’s All-Academic Team with a 3.5 GPA during the winter semester.

Bundzis competed in his second straight Division II National Championship meet two weekends ago. He placed fourth in the 200-yard Backstroke event in the finals and joined a 200-yard Medley Relay squad with fellow seniors Arnoldo Herrera and Ryan Leonard and junior Lajos Budai that broke a school record with a time of 1:28.91.

He also received All-American honors in this year’s 100-yard Backstroke final, claiming sixth place at a time of 47.17.

“It has definitely been an honor to be standing on the podium with the big schools that we never really compete with, and [then] we go beat them in the National Championships,” Bundzis said.
Bundzis predicts that there will future success for both men’s and women’s teams.

“Seeing the whole program working and going in the right track, I think it’s only going to get bigger and stronger too,” Bundzis said.

Set to graduate in May with a bachelor’s degree in marketing, Bundzis intends to accept a job offer with the Dow Chemical company in Midland. The position goes well with his experience working in the sales and business/marketing departments.

Even with the accomplishments made while at NMU, Bundzis is grateful and appreciative for his time contributing for the entire program.

“It’s been an amazing four years here,” Bundzis said. “It’s definitely a completely different experience that I was used to seeing in Europe.”