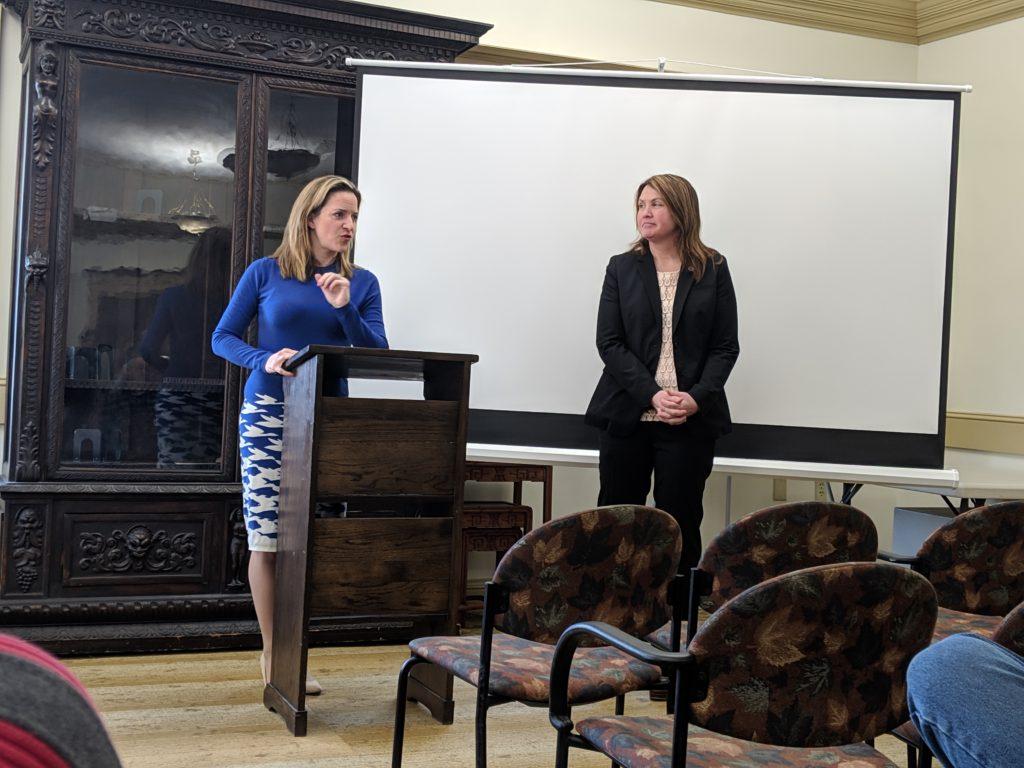 In an effort to fulfill promises of transparency and communication with citizens made on the campaign trail, two Democratic state officials addressed community members about local and statewide issues such as redistricting, financial disclosure and government trust and transparency during a town hall meeting last night.

The meeting took place at 6 p.m. in the Shiras Room of Peter White Public Library and more than 50 attendees participated in the hour-long discussion with Secretary of State Jocelyn Benson and 109th District state representative Sara Cambensy.

“I can’t say enough about how important it is that we feel in Lansing that your voices are heard and that we are doing everything we can on a statewide level to ensure that you’re represented,” Benson said.

Benson initiated the town hall with an update on how her office is implementing Proposition 2, specifically the 13-member citizens redistricting commission comprised of four Republicans, four Democrats and five people who identify with neither party.

“We have those new rights in place which are critical to ensuring democracy is healthy, but having engaged citizens is not enough. We also need to ensure that when you cast a vote, you’re actually in a district that includes your entire community, that doesn’t break it up and that your voice is heard on a representation level,” Benson said. “The way in which districts are drawn can determine the outcome of a particular election and in fact that’s what’s happened over the years.”

Benson promoted “redistrictingmichigan.org,” a website that launched Friday to inform citizens on the details of the commission and the process of citizens drawing their own district maps, and vowed that the Upper Peninsula will be represented on the commission.

“Once commission is seated, our work as citizens doesn’t end, my work as secretary of state doesn’t end. We also need to ensure that that commission is protected from the same pressures that affected legislatures who would draw district lines in the past,” Benson said.

Contextualized by the Center for Public Integrity’s rating of Michigan’s transparency and ethics laws as the weakest in the United States, Benson transitioned the town hall to a critical discussion of financial disclosure precedence.

According to Benson, Michigan lacks transparency because the state does not extend Freedom of Information Act (FOIA) disclosure requirements to the legislature nor governor’s office and does not require legislators to disclose their personal finances.

“Because people are voting on legislation, you should be able to see and have information on who’s talking to those legislators and who’s influencing those legislators as they make their decision,” Benson said. “If you’re voting on something, or taking a position on something, we as citizens should know, and you should be required to disclose, whether it’s going to benefit you financially. It’s common sense.”

Benson—who released details of her personal finances earlier this month—praised Gov. Gretchen Whitmer’s disclosure of her financial records, vowed to hold legislators to a standard of annual disclosure and saluted 38th District Sen. Ed McBroom (R-Vulcan) for his advocacy of transparency policy reform.

Benson added the definition of “political communication” should be broadened to increase the amount of money disclosed in the electoral and political system.

“We learned from last election that the two most significant changes, most sweeping changes to our democracy, came from citizens, not from elected officials,” Benson said. “It is you all who are more motivated to see these changes come to action than the elected officials.”

Cambensy echoed Benson’s comments on legislature transparency and cited her experience in local politics as positive because it required officials to turn over emails.

“When you take this oath of office, the thing that I’ve noticed people expect from you is honesty,” Cambensy said. “At a time when we don’t have enough transparency and the public trust is broken, all of us that support these reforms believe in how Michigan can become a state where we trust those in office.”

House Bills 4007 and 4008 would subject the governor, lieutenant governor and executive staff to the state’s Freedom of Information Act, and House Bills 4009 through 4016 create a new Legislative Open Records Act for lawmakers and their offices.

“Having this change is important and it makes me feel better,” Cambensy said of the transparency policy reform.

Benson and Cambensy concluded the town hall with nearly 10 questions from attendees, most of which regarded clarification on the citizens redistricting commission and increasing communication between officials and citizens.

One attendee posed a question on electoral process reform.

“I like to push the envelope as well. I love data. I love research,” Benson said. “If you can show me that something is going to increase citizen engagement and involvement in our democracy, then I’d love to hear about it.”