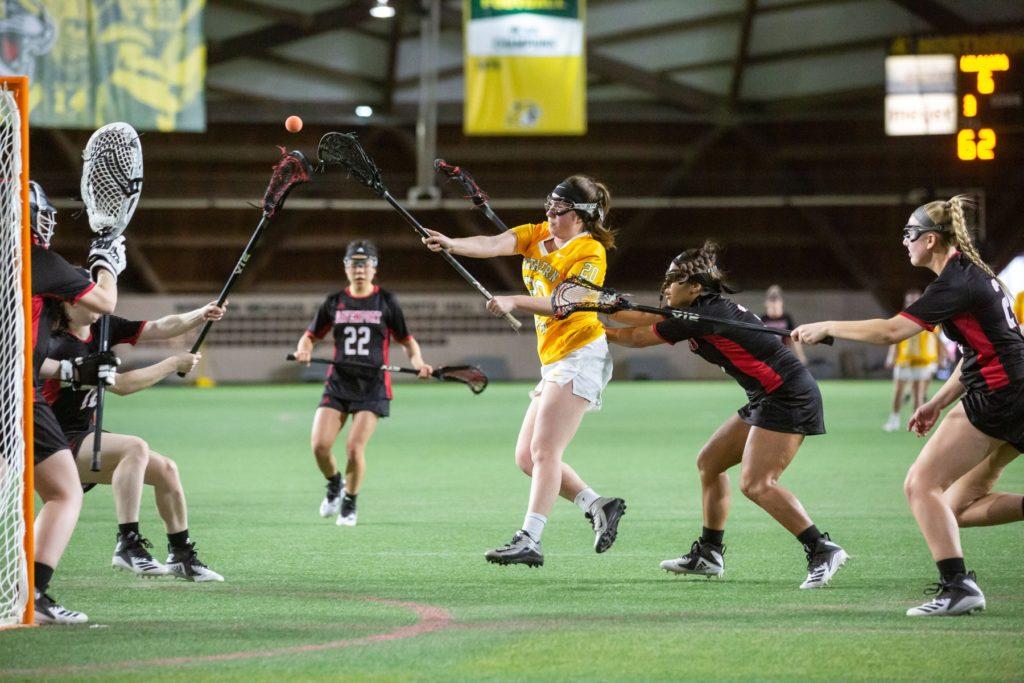 Demonstrating her natural ferocity, junior attacker Angelica Bogden knives through Davenport defenders in pursuit of lighting up the back of the net with relentless authority.
Photo courtesy of NMU athletics

It was a tale of two games for the Northern Michigan University Women’s Lacrosse team after finding itself on either side of the win-lose column.

Entering the week against a McKendree University (MU) Bearcats team with a similar record, the ’Cats looked to pounce on the opportunity to snap a five-game losing streak, but dropped the contest in decisive fashion, 22-3.

NMU licked its wounds as they continued on their roadtrip and faced off against the Maryville (MO) University Saints and fought to a 14-8 victory for their first win in nearly three weeks.

Entering the contest against the Bearcats, NMU had given up over 15 goals in each of the five games they had played thus far in the season and given up 20 goals in its last two matchups, something head coach Emilia Ward acknowledged would have to be adjusted.

“McKendree is a very good opponent and they had kind of struggled a little bit going into that game and broke out of their slump against us,” Ward said. “What’s tough for us is our returners haven’t tasted a lot of success so far as a program. So I think when we face those teams that have juniors and seniors, and at some point in their career they went on winning streaks and had success, they can kind of pull a team out of the ruff. That’s what we don’t have yet.”

In that game, the Wildcats were never able to get their feet underneath them as the Bearcats quickly jumped out to a 10-0 lead just nine minutes into the game.

Freshman attack/midfielder Aleya Speas finally cracked the scoreboard for NMU midway through the first half to score her 14th goal of the season.

Fellow freshman attack/midfielder Emily Renfrew added the only other Wildcat goal of the half but the hosts also added more tallies, and NMU trailed 13-2 heading into halftime.

Offensively, the struggles up-front for the ’Cats continued as MU bullied its way ahead and dominated the pace of play. NMU would stay off of the scoreboard in the half until the 2:44 mark remaining in the game when Renfrew added her second goal of the match.

NMU dropped the contest 22-3, its most lopsided contest this season.

“It was a mix of them [MU] playing really well and us really — not a whole lot worked that game,” Ward said. “We’ve thrown that game out and got back to work on Sunday.”

Fortunately for the ’Cats, victory was on the horizon as they loaded the bus en route for Missouri for a game against a Maryville University team in the middle of its inaugural season, something this young NMU team can closely relate to with a few of the upperclassmen having been on the 2017 first-year program.

Facing a six-game losing streak, what was Ward’s message to the team? Have fun with it.

“Six losses in a row can kind of weigh on you and I think it was starting to,” Ward said. “In a quick halftime speech, try and get that [competitiveness] back, and they started to find their way in the second half and they fed off of it. That’s our big plan this week at practices — try and bring the fun back, bring their looseness back. They play a lot better when that’s going on.”

Junior midfielder Graison Ringlever put the ’Cats on top less than a minute into the game and Renfrew added another four minutes later, her 12th goal of the season, to put NMU on top 2-0.

The Saints responded and tied the game up midway through the first half but it was NMU who would seize the next scoring opportunity when freshman midfielder Katie Zarembski scored on a free position shot, a place the team has excelled at all season. Renfrew scored just 20 seconds later and just like that NMU retook a two-goal lead.

Renfrew added another goal before halftime and Speas scored her first goal of the game, but the two team played to a 6-6 tie heading into the half.

After Ward’s inspiring “have fun again” speech, the Wildcats came out of the locker room and found two quick goals thanks to wicked shots from Ringlever and Renfrew.

The Wildcats never looked back in the contest, expanding their lead at one point to eight goals. The Saints added two goals before the end of the match but NMU hung on and marched onward to win the game 14-8.

Offensively for the Wildcats, Ringlever led the scoring with six goals and two assists while Speas added three goals. This was the first matchup this season that an NMU opponent has been held to under 10 goals.

“You definitely saw the ability of our team to bounce back and get out of a funk,” Ward said. “First half, we started to show signs and second half we really started to look like ourselves again. We were moving the ball well offensively, not being afraid to attack the cage and being physical defensively. That’s really the approach we want to take going into the rest of the season.”

The Wildcats get a bit of a breather this week with only one game on the schedule, a lone road contest at the Lewis University Flyers. Like MU, this is the Flyers inaugural season at the Division II level.

“Just like Maryville, both teams are actually very tight and they played a super tight contest with each other,” Ward said. “Our big thing this week will be getting ourselves right, making sure that our mentality and mind-set are where they need to be to compete at the highest level. Looking past this game, we know that we have three really big ones coming up for conference after this, so we really need to get ourselves right and come out and play well and get a win.”