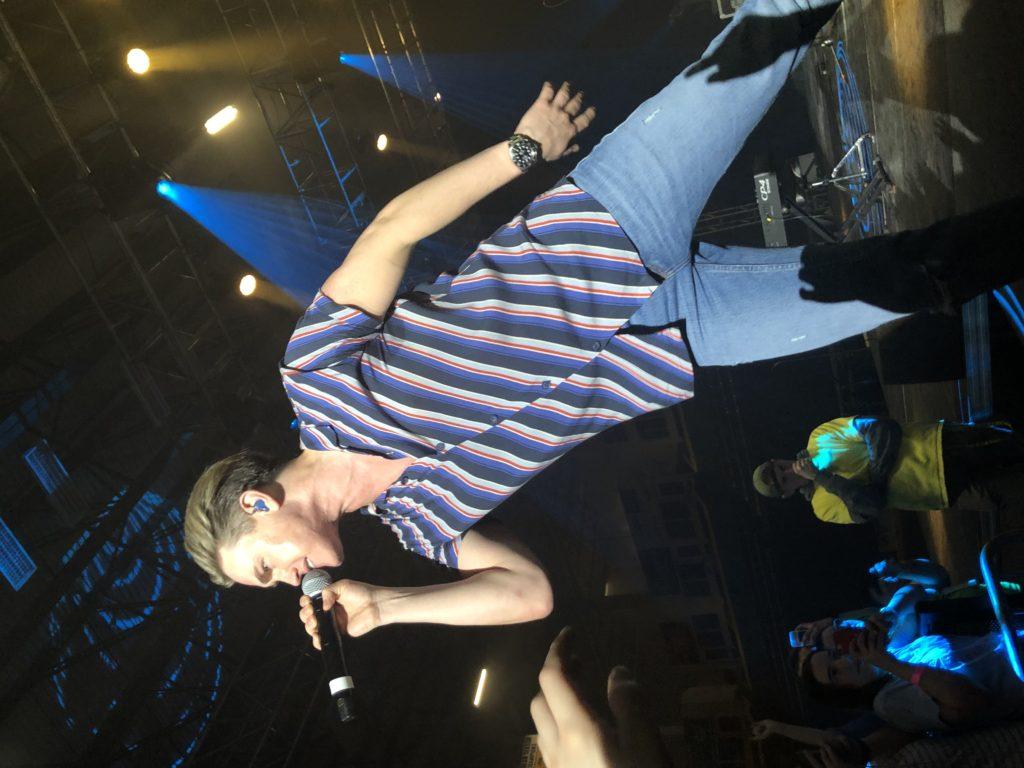 Heartthrob Jesse McCartney funks up the Berry with ‘Body Language’

Beneath the empty stage in the pit only a few burly college guys dressed in yellow security shirts stood helplessly waiting. The green scoreboard read 6:44, less than 14 minutes away from when the doors would open. As the sound crew fiddled with the speakers, the opening act hurried through their last-minute rehearsal. Noise in the Berry Events Center from up above echoed even more. Suddenly, a stampede of girls pierced my boredom. They rushed for the front of the stage and the empty space on the floor was immediately full with 14-year-old girl passion. My petite frame managed to clasp the gray gate, securing my seat, but the bulk of bodies steadily shoved the crowd. In such close quarters, anticipation puffed down the back of my neck. Phones snapped selfies. Girls instagrammed the moment.

When the stage lights turned on, screaming took over but they were going to have to wait.

Before McCartney took the stage, the night opened with a funky band called Chicago Loud 9. With a saxophonist, trombonist, techno-keyboard player, two guitarists and a drummer, a rapper and a female vocalist, Chicago Loud 9 kicked things off with a groovy rhythm sending the crowd in a Michael Jackson sway. The lead singer, wearing red fishnet gloves, black and white checkered pants and complementary furry boots, stole the audience’s attention with her Whitney Houston-like vocals and Madonna divaness. Then the rapper, sporting black shades and a blue tank top expressing “Good Vibes,” burst the audience’s expectations with soulful rap.

“We are a band of eight, but we always say the ninth member is you guys,” the rapper said.
The crowd agreed with expressive “woo-hoos.” With saxophone and trombone jazzy
instrumentals, the crowd was hopping. Each song the band played amped up assumptions of the headlining name. Would McCartney outperform this funky city band? Would he still woo us like he did with that “Beautiful Soul” music video?

As the band closed out their set with Beyoncé’s “Crazy in Love” and a classic mashup of George Clinton’s “We Got the Funk,” chanting for Jesse returned. Two men wearing black fedora hats propped the stage with a more basic layout with only a drum set, keyboard, two guitars and a midi-controller. But the suspense was becoming unbearable.

“Jesse! We want Jesse!” a girl shouted as she climbed on top of the gate.

Darkness returned, triggering a refrigerator-pitch squeal. A hurricane surge from the back of the crowd thrusted everyone into the gate. Blue lights flickered. Drums thumped heartbeats with a thunder, while the guitarist wearing a fedora and black leather jacket embarked on a movie-entrance solo. Then the two musicians stopped and the sound of a record skipping took over. When Jesse McCartney emerged in his blue-jean jacket and slim-cut pants, a sea of young college lassies were sent back to their teenage bedrooms, singing into their hair brushes.

“They got a lot of girls, who know they got it goin’ on. But nothing’s ever a comparison to you. Now can’t you see that you’re the only one I really want. And everything I need is everything you do…” McCartney sang the verse, fans still in squeals. And then he broke out into the chorus where everyone joined him, singing, “She’s no you, oh no…she’s no you.”

Flirting with the audience with bashful eyes and sexy moves, McCartney carried the flashback feel with “How Do You Sleep?” and a stripped down acoustic version of “Just So You Know.”

For junior elementary education Mallory Erva, who purchased her tickets the day they went on sale, the night was “amazing.” It was like walking back into her childhood, Erva said, adding, it was very much a “nostalgic thing.”

“His ‘Beautiful Soul’ music video was the first music video I ever watched when I was a kid. So I’ve definitely been a fan of his for a long time and it’s like a dream come true,” Erva said. “I’m really about songs that have a good message and [being able] to connect to them. That’s why I love music so much.”

When McCartney sat down at the keyboard to serenade the room with “Bleeding Love”—a song he co-wrote with Ryan Tedder—many people were baffled. Though Leona Lewis “killed it,” Erva wondered why he didn’t keep that hit for himself. But Erva couldn’t complain, she said it was one of the best concerts she’s ever been to.

The ending definitely had an impact on others, including Northern Arts and Entertainment Executive (NAE) Board Member and junior English major Olivia Helka.

“Right when Jesse came back on for his encore, I was in front of the barrier looking at the crowd. Watching everybody’s excitement for ‘Beautiful Soul’ really topped off the night,” Helka said.

NAE had prepared for Jesse’s visit to NMU since last semester. From 9 a.m. to after 5 p.m., a crew of 12 NAE members worked strenuously with the couple of professional stage crew members brought in from Green Bay. Though with each concert you can never fully prepare, Helka thought the concert went “fantastic,” adding, there weren’t any “hiccups” and people seemed to really enjoy both acts.

McCartney’s performance was very “energetic” and “free flowing” — like anyone could dance and not have to worry about people staring at them because everyone was dancing, she said. His music is timeless in that way, she noted.

“I think a lot of it comes from our age of girls. So the girls who grew up with him they were like 10 years old, he was that teenage heartthrob. I think we’ve been able to carry his music over and he’s been trying to stay relevant with his music which is really great on his end because most teen heartthrobs kind of fall off the face of the earth with their one hit,” Helka said. “And so when people hear Jesse McCartney, they’re like, ‘Oh my gosh? He has new music?’

He still has that really good dancing music you can just throw on and do whatever you need to do with it.”