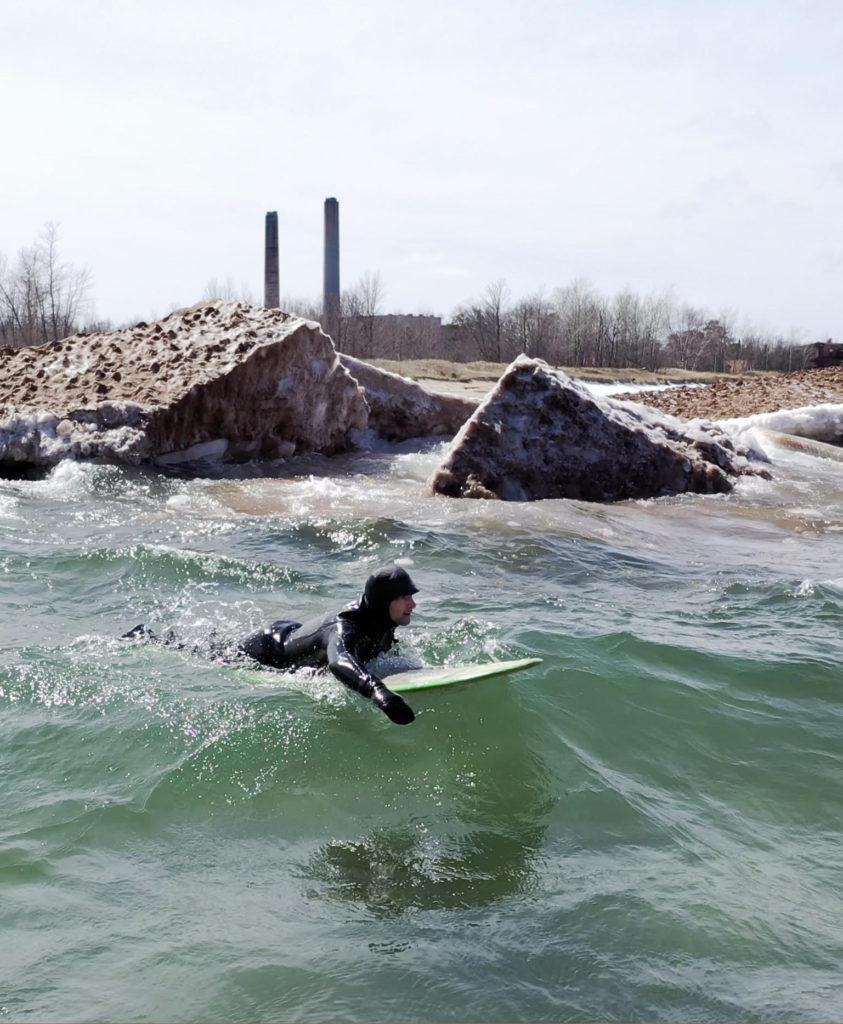 The journey of an Upper Peninsula surfer

If you hang on too tightly, you’re not being one with the water. Cocooned in 5mm winter surfing gloves, his knuckles turned white from the death-grip he had on his icy, waxed board. In survival situations, relaxation is key when every oxygen molecule counts. Born on Michigan Street but raised in Lake Superior, relaxing in stressful situations is second nature for Dan Schetter, a man locally known as “Surfer Dan.”

Although it was February, he wore a thin Christmas sweater and a black puffy coat. Resting on a tall, sunflower-orange stool in a tiny grocery store cafe, he had faded grey canvas pants on. He tapped his black coffee cup on the polished wooden table with his weathered hand, revealing short-clipped fingernails. The tapping steadily increased as he spoke.

After Schetter got his first taste of riding freshwater waves, he couldn’t break the feeling it gave him. He went in windstorms and blizzards. He surfed until his beard was heavy with icicles and his board turned into a slippery icicle. After years of relentlessly returning to the water, media caught attention and Schetter became the unofficial ambassador of U.P. ruggedness—however, reluctantly.

“I was getting inundated with people wanting to put me in movies, on billboards, commercials and taking my image without asking and then using it for their businesses,” Schetter said, tapping his coffee cup more fevertly. “I don’t go surfing for likes or fame, I go because it makes me feel good.”

Schetter is happy to share his message through photos and stories he tells people, with the knowledge that they will post with “good intentions.” Like holding on to his board too tightly, Schetter has learned to loosen his grip on what is said about him in the viral articles, videos and photos.

“I can’t control what people are going to do with the images — what their intentions and motivations are,” Schetter said. “All I know is that I love surfing and when I immerse myself in it, I feel good and healthy. I get great exercise. I sleep better. I’m breathing clean air.”

His primary focus is to “come back to his center” and find out what’s important — stay physically and mentally healthy and take care of his family and friends. The tapping of the black coffee cup gradually became more rapid as he spoke . He strives for pure fitness because there are those who are paralyzed yet live vicariously through him.

While in the hospital recovering from a surfing injury, Schetter couldn’t wait to get outside and play. This is when his dreams and anxiety to get back to the water flooded in.

“In my dreams, once I got to the ocean, I couldn’t get to the waves. Or if I could get to see the waves, I wouldn’t have a board. There’s always this conflict of striving to reconnect with my favorite place and something blocking me,” Schetter said. “And then I realized [that conflict] was myself. Once I started surfing again, that’s when the nightmares stopped.”

Now Schetter describes the act of preparing to surf as a “daymare” with the delicate planning it entails: ding repairs, waxing his board, a good wetsuit and leash, having hot water at hand and securing safe driver for the ride.

Lake Superior surfers plan their day according to the weather. Whenever there’s a high wind speed, long wind duration and fetch, or the water surface area that the wind affects, it’s time to hit the waves. A storm modeled on a weather map is characterized by pressure. Low pressure is represented with closely-packed circles called isobars, resembling the layers of an onion. On days with very close isobars, popular surf locations are dotted with 10 to 15 black wetsuited surfers, eagerly waiting to gobble up a tasty wave.

It was a blustery day in October. Gales wrestled heaps of water onto Lakeshore Boulevard, ripping red flags from their their beach posts. Spectators sat in their cars at a safe distance away from Lady Superior’s wrath, but close enough to capture her strong talons clawing into the shore. Though it be a reckless scene and a potential catastrophe waiting to happen, it’s a day surfers long for.

Darrin Bergman, a sophomore secondary education and social studies major, recounted this day as the day that almost took his life. Two days before the storm rolled in, Bergman got a call from his buddy, warning him against surfing unless he wanted to die.

“I had no business going out there. The bank of the shore was torn up, it was just raw dirt and pine trees had fallen into the lake,” Bergman said. “I made it through the break and was exhausted. As I was coming into a wave I saw there was a pointy boulder and a flat boulder, and thankfully it spat me onto the flat boulder.”

A young but versed surfer, Bergman has learned from many seasons of winter surfing that you have to get tossed around a few times before you learn your limits. Both Schetter and Bergman put their trust into what they can control: knowledge of the weather, the area they are surfing in and their own physical capabilities. The rest is up to the lake.

Schetter keeps his wits about him when braving the icy waters, though. Without a wetsuit in cold water, a person has under one minute to regulate their breathing after cold-shock, about 10 minutes of controlled movement and one hour until hypothermia creeps in, according to the National Oceanic and Atmospheric Association. For Schetter, after his bodily emergency response is lost, he exits the water.

“Once I’m not in pain from the cold and I’m going to a permanently happy place, I leave the water. What if I step on a rock and I can’t feel it. [It] might be bruising my foot or ripping a tendon. I just don’t want to see anybody die,” Schetter said.

As a Marquette local, Schetter is used to hearing tales of “the stupid college kids” testing their limits in dangerous weather conditions. He explained that fear itself is what creates death and there needs to be deeper understanding of water safety. In 2018 alone, Lake Superior took six lives due to tragic accidents, not related to surfing, as reported by the Great Lakes Surf Rescue Project.

“I’m an empathetic human being so when I see someone doing something dangerous, I feel an obligation to mention it to them,” Schetter said. “Sometimes those good intentions can be lost because there’s not always time to sit and give people free [surfing] lessons when they’re paddling up the face of the wave.”

Schetter’s soul is so intertwined with the water that he said he’s crazy enough to run back into the waves when someone is being carried out of them, due to an injury.

“What’s that about? Am I poseidon? Was I born in the water? Is that why I’m trying to get back there? I get anxiety because I know the waves are coming and I have trouble sleeping,” Schetter said. “When I go surfing I’m not just chilling at the beach. I’m in strike mode. It’s like heaven opens up and then I try to absorb as much as possible.”

A self described spiritual person, Schetter shares surfing in what he terms a “weird energy exchange.” He buys and sells surfboards, but finds real value in teaching surfing, free of cost. In turn, that person might help in other meaningful ways, such as paying for a meal or plowing his driveway.

“It’s not me using them as a market to sell a board. It’s me sharing and doing the best with what we have,” he said with an honest shrug.

Surfing season in The Great Lakes region extends from July to January, depending on severe weather patterns. Most of Schetter’s surfing occurs during the fall and winter when waves are at their peak. The colder the weather, the better the surf. Winter months in the U.P. are hit with heavy amounts of precipitation and snow and active storms. The stronger and longer the wind blows on the water, the taller the waves are. Thus, the best times to surf are when the first eastern white pine needle has grown cold. With winter spanning half of the year, Schetter said it’s a struggle to survive in the U.P. But the Finnish motto, spotted around town on bumper stickers and a hallmark to the Scandinavian culture, keeps him stoically determined.

“I believe in SISU and think it’s about guts and the will to survive. To be self-sustaining and let your cup fill over to help others and chop your own firewood, to get up in the morning to absorb as much sunlight as possible,” Schetter said. “SISU could even be the responsibility of taking a rest.”