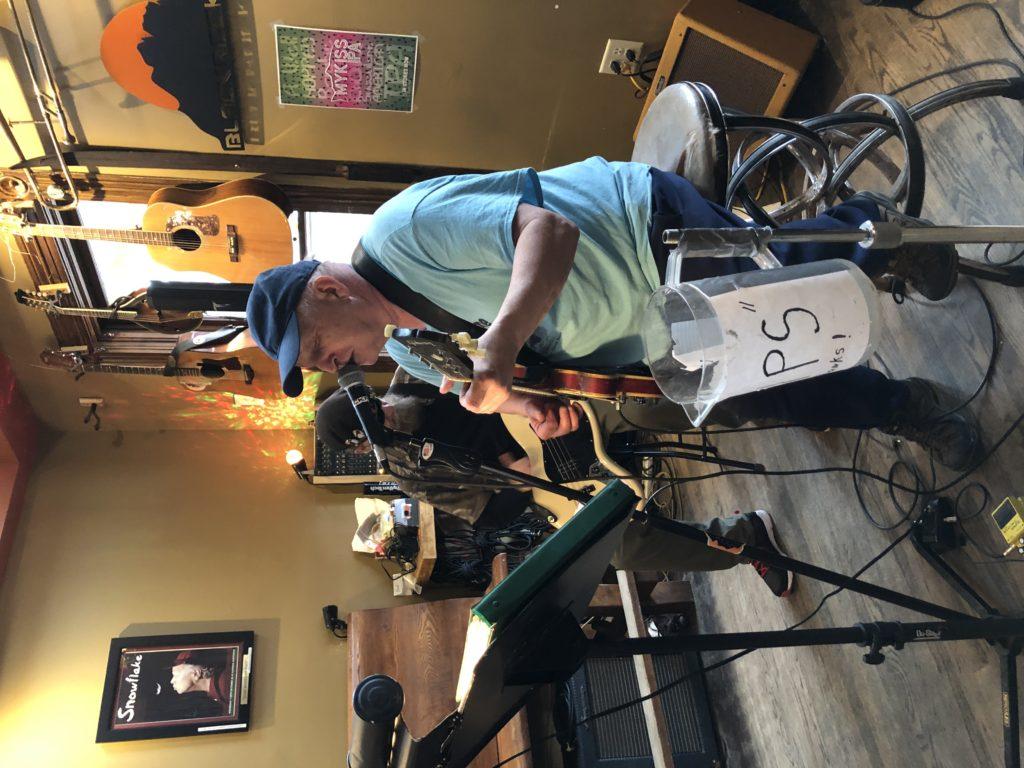 Local musician Derrell Syria writes and performs music inspired by the U.P.
His voice echoes the island flare of Bob Marley, yet carries the pitch-perfect tone of Bob Seger and the story-telling of Bob Dylan, all put together in one. With a Gibson ES-335, he’ll walk you through the decades of top hits. Or he’ll put a little jump into your step with one of his original songs, including the pride-driven “U.P. Boy.” Closing your eyes, you’d think a 30-year-old was pouring out his soul to you. Open them up and you’ll see a smiling, Finnish baby-boomer hitting each note with flawless execution.

Born and bred with the staple whitty Yooper character and strong ties to a Finnish background, you’ll find Derrell Syria playing in and around town at places like the Ore Dock Brewing Co. and Blackrocks Brewery. Whether accompanied by one bass musician or in his Finnish reggae band Conga Se Menne, Syria keeps the music upbeat and inspirational; and that’s the way he likes it.

“People get tired of listening to the same old, cliché vocal and melodic lines. Anything a little different kind of catches their attention. And I like doing it just for myself because I don’t like to do it the old standard way. I like to change things around,” Syria said.

Syria began playing music when he was 5 years old. He learned to first play the accordion under the direction of his father and then ventured out to other instruments, including the drums, the bass guitar and the guitar. Growing up in a musical family, he often sang with his mother and brother, harmonizing and recording themselves. As a kid, Syria used to be able to read music. As he entered his teens though, he began performing rock and roll music, playing only by ear, he said.

Now that Syria’s retired from working at the Marquette County Transit Authority where he worked over 30 years, he’s no longer consumed with the long work weeks of driving and has more time for music and spending time with his three children and seven grandchildren.

Though his voice comes out “flawlessly” to Syria most of the time, there are times where it’s a struggle to hit those notes on key, he said. About a year ago, Syria had lost his voice due to a silent reflux and couldn’t sing for eight months. It was “depressing” for Syria because his four-octave range was reduced to just one octave, he said. Now that his voice has fully recovered, Syria said he tries to take care of his vocals more, watching what he consumes and tries not to drink too much dairy before his performances.

“My voice just got better with age ever since I stopped drinking and smoking,” he said. “The most challenging thing is to make it through the whole performance without making any mistakes and of course, being creative while you’re doing it. [It’s] called spontaneity. That’s the way you do it…if you’re playing with good quality musicians, they can usually follow what you’re doing.”

Currently, Syria is working on his fifth album, which he hopes to finish in a year or so. For song ideas, he picks up quirky phrases he hears and writes lyrics to suit them. Next he heads to his studio where he comes up with a drum track and chords, then does all the vocals and harmonizes himself.

When it comes to selecting songs for his sets, he said he pulls from a range of artists like Bob Marley, Lake Street Drive, Simon and Garfunkel and Jackson Brown. He said he tries to choose music people want to hear or whatever suits the venue whether it be a bar atmosphere or music festival.

“I hope they get a good sense that the music is good. And the stuff I usually play is the happy sound, not too much minor blues or anything where you’re crying in your pretzels or stuff like that,” he said. “They’re just happy they see such an old timer like me still playing and the music is good, that’s all there is to it. I surround myself with good musicians and I wouldn’t have it any other way. To play with second-class musicians is not an exception.”

Syria’s band Conga Se Menne, which he formed back in 1994, and plays from San Diego to Florida to Thunder Bay, where they have an upcoming summer performance. The band varies in size from two to six musicians, depending on the venue. But one thing Syria said is “wonderful” about playing with the band is being able to perform with his son Ethan, who plays the congas and vocalizes. Last year, Syria played 150 shows, but this year with a recent knee replacement, he hopes to return to good health and vacation a little more, he said, adding, he’ll be heading to Alaska this weekend to visit one of his sons and his family. But deep down, Syria said he enjoys living and performing in the U.P.

“It’s made me what I am today, you know, I’m a Yooper. I like the area, I like the four seasons and the music is basically about living in the Upper Peninsula or in the North. A lot of people live a certain way and I write songs about it,” Syria said.